Social networking site Facebook is reportedly mulling filing for an initial public offering by the end of the year. According to several media reports, Facebook would be looking to raise about $10 billion, in an IPO that would value the company at more than $100 billion.

Charles Sizemore, editor of The Sizemore Investment Letter, appeared this week on Mike Robertson’s Straight Talk About Money radio show.  To listen to Charles and Mike discuss the ongoing European debt crisis and their outlook for the stock market in 2012, please click here to download the audio.

Disk drive maker Seagate Technology (STX) forecast second quarter revenue expectations ahead of analyst estimates late yesterday, and gave its prognosis of its industry related to the record flooding in Thailand. Seagate said that, due to industry impacts caused by flooding in Thailand, hard disk drive supply will be constrained for several quarters.

Nov. 29 (Bloomberg) — American Airlines parent AMR Corp. filed for bankruptcy after failing to secure cost-cutting labor agreements and sitting out a round of mergers that dropped it from the world’s largest airline to No. 3 in the U.S. With the filing, American became the final large U.S. full-fare airline to seek court protection from creditors. Chairman Gerard Arpey will retire and be replaced by Thomas Horton, AMR said. Shannon Pettypiece reports on Bloomberg Television’s “InsideTrack.” (Source: Bloomberg)

The company is buying back billions of its stock. It has raised dividends at a torrid pace over the past five years. And the company just announced its sixth consecutive quarter of record sales.

Just days ago Warren Buffett’s Berkshire Hathaway (NYSE: BRK-B) even announced it has taken a 9.3 million share stake in the stock, a position worth over $200 million.

You likely know Intel already. It’s a major blue-chip company and the world’s largest semiconductor maker. It holds an 80% stranglehold on the PC semiconductor market. No one else even comes close. The computer you’re reading this on is likely powered by an Intel chip.

Some people may see the stock as “boring” and say that it hasn’t gone anywhere for years. But I see something different, and I think Warren Buffett sees the same thing. Simply put, Intel’s shares are becoming more valuable quarter after quarter, but the share price hasn’t responded yet.

Simply look at the stats…

– Intel is in the middle of an enormous share buyback spree. Over the past year, it has spent $11.5 billion to purchase 538 million shares. It still has $14 billion allocated to future buybacks — that’s more than 10% of the outstanding stock.

– The company holds more than $15 billion in cash on the books. That comes out to $2.97 per share… more than 11% of the current share price.

– Right now, Intel’s shares trade near the same level they did back in the spring of 2010, when earnings were just $1.09 per share during the previous 12 months. But today, earnings over the last year total $2.31 per share — more than 100% higher.

It doesn’t take the expert investing skills of Warren Buffett to see why Intel could go higher in the months and years ahead. (For more details on Intel, I’ve profiled it the recent presentation I put together on my Top 10 Stocks for 2012. You can read the entire profile here.)

But there’s another reason why I like Intel so much. After years of research, I’ve found that more often than not, companies that fit within a few simple categories are the ones that make you the most money long-term.

Intel fits all these characteristics perfectly. It’s why I think it’s a “no-brainer” investment. Strong companies that take care of their shareholders tend to do better over the long-run. It doesn’t take a PhD to understand that.

Of course, with investing there’s never a surefire thing. Even the seemingly strongest companies aren’t guaranteed to deliver a positive return.

But that said, if you invest in companies with one or more of these three simple traits, then I think it gives you the best chance of making money.

[Note: As I said above, I selected Intel as one of my Top 10 Stocks for 2012. But it’s far from the only stock my staff and I found that has the traits described above. For more on this select list of 10 companies, you can read the research my team and I put together by visiting this link.]

Nov. 29 (Bloomberg) — William Cohan, author of “Money and Power: How Goldman Sachs Came to Rule the World” and a Bloomberg View Columnist, talks about a meeting former U.S. Treasury Secretary Henry Paulson held in July 2008 with hedge fund managers and Wall Street executives. According to a fund manager who attended, Paulson hinted of a Fannie Mae and Freddie Mac rescue, Bloomberg Markets magazine reports in its January issue. Cohan speaks with Erik Schatzker on Bloomberg Television’s “InsideTrack.” (Cohan is a Bloomberg View columnist. The opinions expressed are his own. Source: Bloomberg)

The latest Commitments of Traders (COT) report, released on Monday (due to last week’s holiday) by the Commodity Futures Trading Commission (CFTC), showed that large futures speculators increased their bullish bets in favor of the US dollar and raised their bearish positions for the euro to the highest level all year as the euro debt crisis has dominated headlines.

Non-commercial futures traders, usually hedge funds and large speculators, increased their total US dollar long positions to $12.11 billion on November 22nd from a total long position of $10.13 billion on November 15th, according to the CFTC COT data and calculations by Reuters which calculates the dollar positions against the euro, British pound, Japanese yen, Australian dollar, Canadian dollar and the Swiss franc.

EuroFX: Currency speculators added to their short bets for the euro against the U.S. dollar for a second consecutive week as of November 22nd. Euro short positions rose to a total of 85,068 net contracts from the previous week’s total of 76,147 net short contracts. Last week’s short position is the lowest level for euro positions all year and the highest short level since June of 2010.

The COT report is published every Friday by the Commodity Futures Trading Commission (CFTC) and shows futures positions as of the previous Tuesday. It can be a useful tool for traders to gauge investor sentiment and to look for potential changes in the direction of a currency or commodity. Each currency contract is a quote for that currency directly against the U.S. dollar, where as a net short amount of contracts means that more speculators are betting that currency to fall against the dollar and net long position expect that currency to rise versus the dollar. The graphs overlay the forex spot closing price of each Tuesday when COT trader positions are reported for each corresponding spot currency pair.

CHF: Swiss franc positions declined to their lowest level all year against the dollar last week. Speculator positions for the Swiss currency futures edged down to a total of 5,870 net short contracts following a total of 1,904 net short contracts as of November 15th. The Swiss currency, usually a popular safe haven currency, has continued to see limited strength in Forex trading since the Swiss National Bank initiated a policy to weaken the currency.

MXN: Mexican peso contracts fell last week to the lowest level all year and broke a string of three consecutive weekly improvements. Peso positions declined to a total of 31,582 net short speculative positions as of November 22nd following a total of 15,021 short contracts that were reported on November 15th. Peso positions have surpassed their previous lowest level of 27,055 short positions that was registered on October 25th.

COT Currency Data Summary as of November 22, 2011
Large Speculators Net Positions vs. the US Dollar 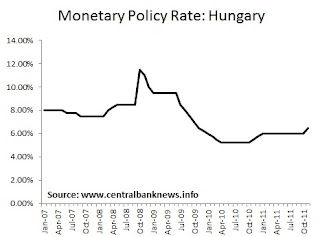 The Magyar Nemzeti Bank increased its central bank base rate by 50 basis points to 6.50% from 6.00%.  The Bank said: “Monetary policy can best support the recovery and contribute to an environment conducive to investment and job creation by maintaining predictability and preserving the stability of prices and the financial system. The depreciation of the forint in recent months has caused a deterioration in the inflation outlook and increased the need for balance sheet adjustment in the economy. The Monetary Council decided to raise the base rate by 50 basis points in view of the upside risks to inflation and increased perceptions of the risks associated with the economy. If the outlook for inflation and risk perceptions remain persistently unfavourable, it may prove necessary to raise interest rates further in the coming months.”

The Magyar Nemzeti Bank previously held the interest rate unchanged at 6.00% during its October meeting, after raising it 25 basis points in January this year.  Hungary reported annual inflation of 3.6% in September and August, compared to 3.1% in July, 3.5% in June, 3.9% in May, and 4.7% in April.  Hungary’s Central Bank has a medium term inflation target of 3%, while the Bank expects inflation to average 3.9% this year.

The Hungarian economy grew at an annual rate of 1.5% in the June quarter, compared to 2.4% in the march quarter, and 1.9% GDP growth recorded in the December quarter last year.  The Hungarian forint (HUF) has lost about 11% against the US dollar this year, the USDHUF exchange rate last traded around 232