The past week in monetary policy was relatively quiet with just 4 central banks announcing interest rate decisions.  Israel cut its rate by 25bps to 3.00%, while Romania held at 6.25%, Taiwan held at 1.875%, and Colombia held at 4.50%.  Also making news in central banking and monetary policy was the announcement from the central bank of Angola, where it said it would launch a new benchmark interest rate.  Elsewhere, Vietnam announced deposit interest rate caps, and Denmark announced a set of emergency bank liquidity provisioning measures. 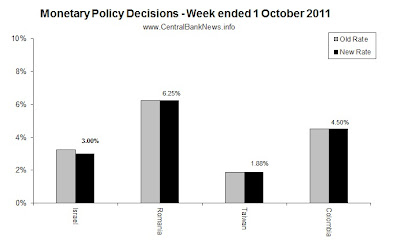 Following are some of the key quotes from the central banks that announced monetary policy decisions over the past week:

Looking at the central bank calendar, next week there are eight central banks scheduled to announce monetary policy decisions. The big one will be the ECB, with some speculation on a rate cut – but the more likely outcome being further liquidity measures, also, this will be Jean-Claude Trichet’s last meeting before Mario Draghi takes over as ECB president. Attention will also be paid as to whether the Bank of England or Bank of Japan announce further quantitative easing.