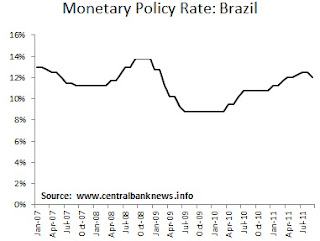 The Banco Central Do Brasil dropped the Selic interest rate by 50 basis points to 12.00% from 12.50% previously.  In its statement, Brazil’s Central Bank Monetary Policy Committee (Copom) said: “Reevaluating the international scenario, the committee considers that there has been substantial deterioration, shown by, for example, generalized and large reductions in growth projections for the principal economic blocks.  The committee understands that this increases the chances that restrictions that are today seen in various mature economies will prolong themselves for a longer period than expected.” …”Therefore, the committee understands that the international scenario shows a bias toward disinflation on the relevant horizon.”

Brazil’s central bank previously raised the Selic rate by 25 basis points to 12.50% at the June Copom meeting this year, which at the time amounted to total tightening for the year of 175 basis points.  Brazil reported an annual inflation rate of 6.87% in July, up slightly from 6.71% in June this year,  and 6.55% in May, and just outside the official inflation target of 4.50% +/-2% (2.5-6.5%).  The Brazilian government is forecasting economic growth this year of 4.5-5%, compared to GDP growth of 7.5% during 2010.  The “BRIC” emerging market economy grew 1.3% q/q in the March quarter, placing annual growth at 4.2%.
www.CentralBankNews.info