The week in monetary policy saw 8 central banks announcing interest rate decisions.  Of those that changed rates were: India +50bps to 8.00%, Nigeria +75bps to 8.75%, and Colombia +25bps to 4.50%.  Meanwhile those that held monetary policy interest rates unchanged were: Israel 3.25%, Hungary 6.00%, New Zealand 2.50%, Kenya 6.25%, and the Philippines 4.50%.  Other than interest rates, the Philippines raised its required reserve ratio by 100 basis points to 21%, and Turkey dropped its required reserve ratios by 100-200bps to add extra liquidity to the market. 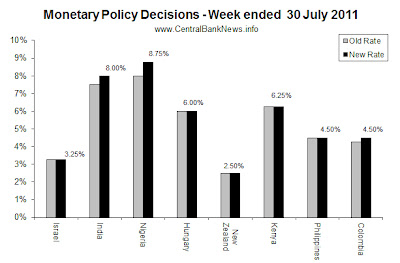 In terms of themes, the week was very much dominated by emerging market central bank activity. India surprised the market by raising rates more than expected in response to a persistent inflation threat against the backdrop of still relatively strong economic growth. Indeed the message was that emerging markets are still facing elevated price levels and inflationary impulse, and many of them are still recording relatively high rates of growth, particularly as compared to developed markets.

A selection of key quotes from the monetary policy statements and media releases are listed below:

Looking to the central bank calendar, next week is set to be dominated by developed market or advanced economy central bank activity (note, the US also meets early in the following week).  So it will be an interesting week in terms of how these banks react to whatever happens with the US debt situation…