While the scandal served as catalyst for the fire, the match was lit a long time ago

These are a few descriptions for Munich-based Fintech firm Wirecard, whose recent epic fall from grace is one of the biggest financial bombshells in Germany’s history. This chart captures the stock’s crater-making crash in June — from 104 euros per share, to ONE single euro. 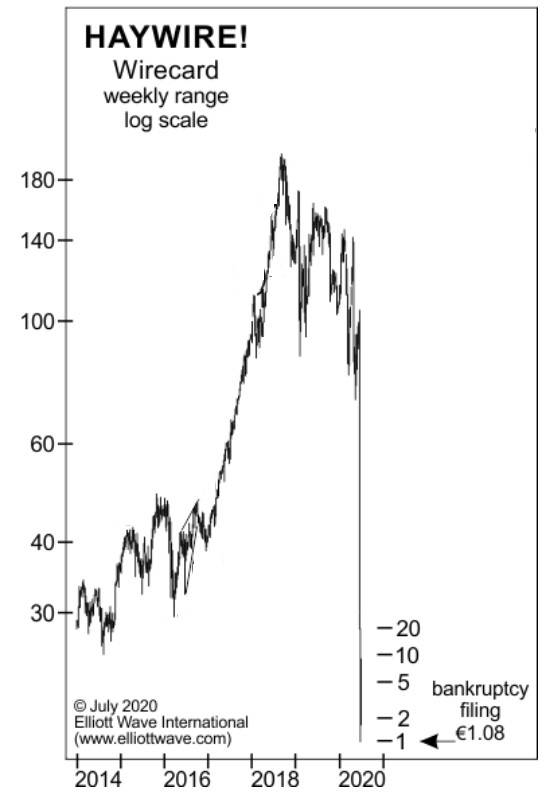 
10 out of 10 mainstream experts say the catalyst for Wirecard’s crash was the June 19 revelation that nearly $2 billion in supposed profits had mysteriously vanished from the company’s balance sheet. (If it was ever there to begin with). Dubbed the “Enron of Germany” by a June 29 CNBC article, Wirecard’s scandal led to the firing of its CEO, a bankruptcy filing, and a $4 billion IOU-zilla issuance to creditors.

“The collapse of Wirecard, once one of the hottest fintech companies in Europe, dwarfs other German corporate failures. It has shaken the country’s financial establishment … A scandal like Wirecard is a wake-up call that we need more monitoring and oversight than we have today.”

True, except there has already been more than one “wake-up call” — as early as two years ago.

Back on January 23 — of 2018 — one news source revealed how Wirecard was well-known for “making highly unusual purchases,” using “adjusted metrics to inflate the appearance of earnings,” and skirting a 7-month long investigation into a deal that saw 175-285 million euros missing from the company’s coffers, leaving the sellers unpaid.

Yet, as that same article observed, these dubious episodes didn’t stop investors from “still placing their faith — and money — behind Wirecard.”

And then came the latest Wirecard scandal, which supposedly “caused an 80% plunge in the company’s stock price over the last two days.” (New York Times, June 19)

All of which begs the question: Why did investors, after backing up Wirecard’s dubious practices for years, suddenly lose faith in the company?

And was there a way to foresee that change of heart?

Our friends at Elliott Wave International believe the answer is yes — and it comes down to investor psychology, or social mood.

“When the social mood trend changes from optimism to pessimism, creditors, debtors, producers and consumers change their primary orientation from expansion to conservation.”

“Conservation” for investors manifests as doubt in the worth of a stock. Adds Prechter:

“People seem to take for granted that financial values can be created endlessly seemingly out of nowhere and pile up to the moon. Asset prices rise because those transacting agree that their prices should be higher…

“Conversely, for prices of assets to fall, it takes only one seller and one buyer who agree that the former value of the asset was too high. If no other bids are competing with that buyer’s, then the value of the asset falls, and it falls for everyone who owns it.”

The visible result of this shift in psychology occurs on a market’s price chart, as specific Elliott wave patterns.

Thus, one month after Wirecard became the DAX’s #2 stock, Elliott Wave International’s September 2018 Global Market Perspective warned that, once the extreme optimism surrounding the fintech sector reached a peak, the mania’s “soaring valuations and ever-accelerating growth forecasts” would reverse and the entire industry would experience a “a catastrophic sell-off.”

From there, Wirecard’s meteoric rise reversed with shares plunging 50% into March of 2019. Officials stepped in to stem the decline with an unprecedented single-stock ban on short selling.

Elliott Wave International’s March 2019 Global Market Perspective foresaw the futility in such “Draconian measures” and showed this chart of Wirecard.

You can see that a five-wave rally into the 2018 peak was complete, marking a reversal in investor psychology — and the next move would see a “downward spiral.” 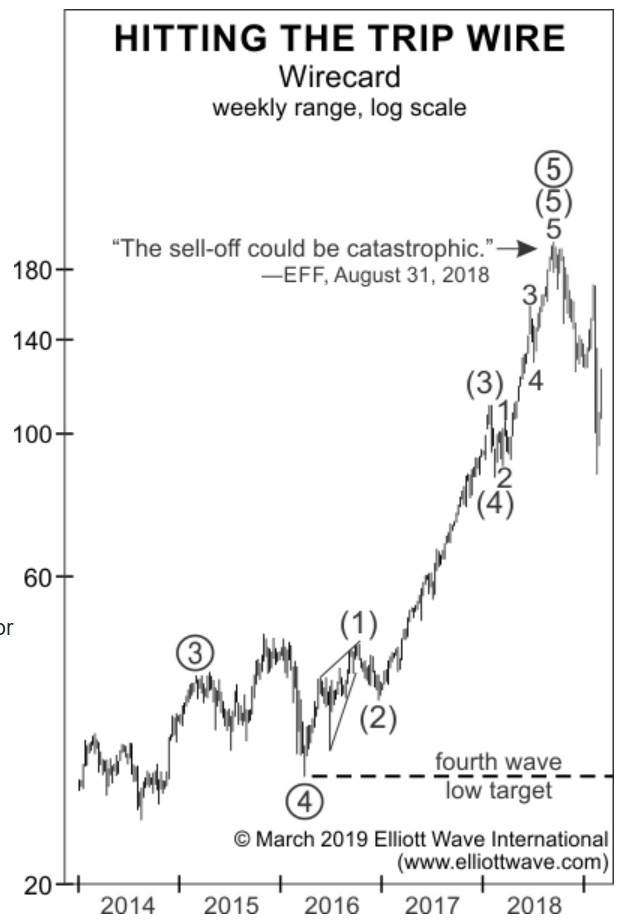 “Catastrophic” was exactly how the media described the selloff that followed:

But as you can see, from an Elliott wave perspective and the independent analysis of Elliott Wave International’s Global Market Perspective, the writing was on the wall nearly TWO years before the June 2020 scandal.

The best part, our friends at Elliott Wave International have just alerted us to their July 23-30 Global Opportunities FreeWeek. This 7-day event invites you behind the paywall with instant access to their July 2020 Global Market Perspective — and other free forecasts for 50+ most-watched global markets.

To join Elliott Wave International’s Global Opportunities FreeWeek, all you need is a free Club EWI password. Take 30 seconds to get one now and on July 23-30, read their forecasts free. (No catch, and no credit card is required.)

This article was syndicated by Elliott Wave International and was originally published under the headline Wirecard Goes from $24 Billion to Bust: A “Wake-Up Call” Two Years in the Making. EWI is the world’s largest market forecasting firm. Its staff of full-time analysts led by Chartered Market Technician Robert Prechter provides 24-hour-a-day market analysis to institutional and private investors around the world.