Gold and Oil: Be Aware of the “Spike”

“Hope and fear look different on a chart”

Recently in these pages, we noted that bull markets in stocks tend to end with “a subtly slowing ascent” rather than with a final “spike” higher, as many investors believe. Historical examples were provided.

It was also pointed out that, by contrast, commodities do tend to end major uptrends with a price spike.

The Wall Street classic book, Elliott Wave Principle: Key to Market Behavior, by Frost & Prechter explains why (keep in mind regarding the quote from the book that fifth waves are the final wave in the main trend of a financial market): 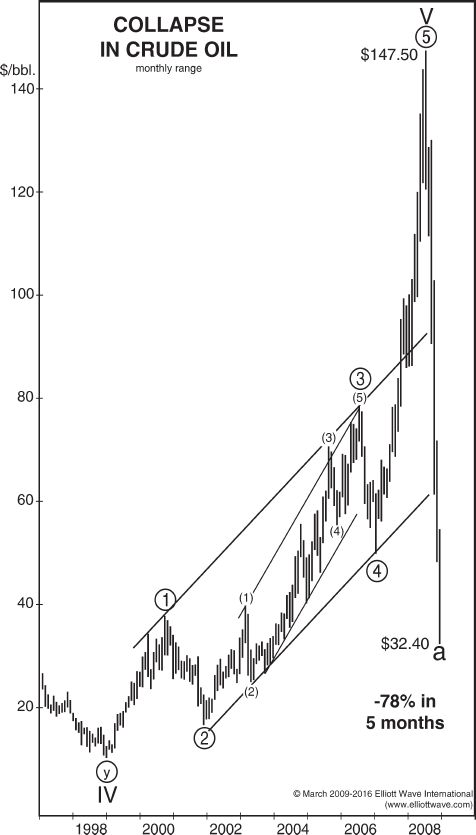 Of course, precious metals are also commodities. Thus, the price history of gold offers another historical example of a price spike going into a peak.

This chart and commentary are from the Sept. 2, 2011 Elliott Wave Financial Forecast, a monthly publication which provides analysis of major U.S. financial markets: 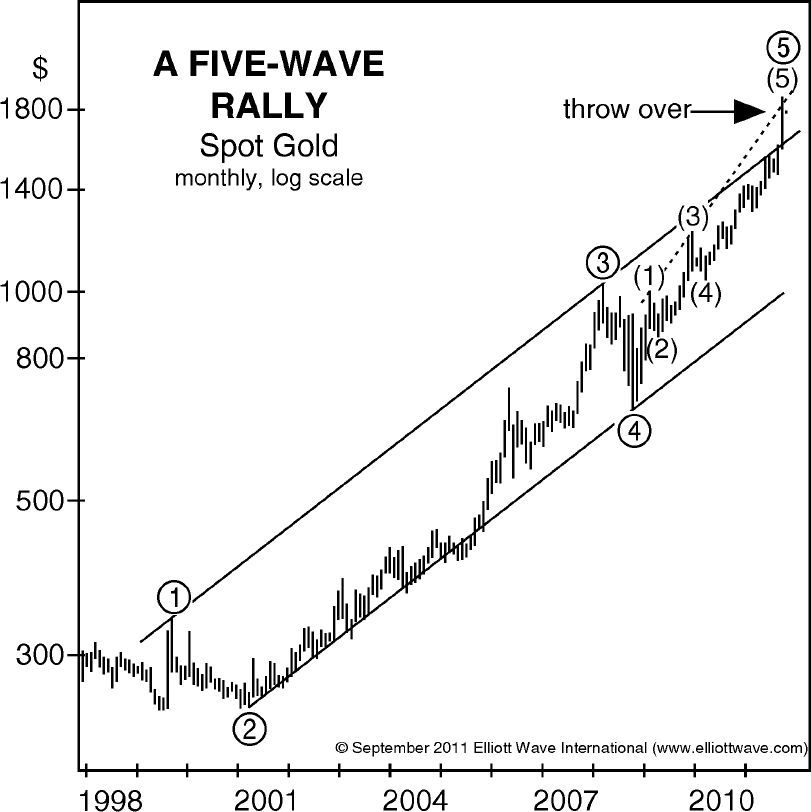 Gold’s wave structure is consistent with a terminating rise.

Four days after that chart published, on Sept. 6, 2011, a headline in the British newspaper, The Guardian, said:

There we have that word “fear” again.

Now, let’s return to the topic of crude oil — a market that’s seen extraordinarily dramatic moves in 2020, as you probably know.

This chart from the April 2020 Elliott Wave Financial Forecast shows when Elliott Wave International’s analysts made key calls on the crude oil market in recent history: 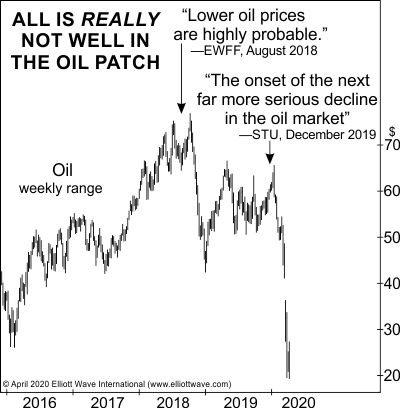 You can see the junctures at which the Elliott Wave Financial Forecast and the U.S. Short Term Update prepared Elliott Wave International’s subscribers for declines.

The chart shows crude oil’s recent plunge. When we’ve felt the time was right to make comments on oil’s prospects, we’ve done so, as shown on the chart. Our last comment was in December 2019. Since January of this year, oil futures have crashed 71%.

Of course, the volatility in the crude oil market continued thereafter.

How would you like to get insights into the “forecasting tool” which EWI’s analysts employ?

You can do so — 100% free — via a valuable resource titled “The Forecasting Tool That Called Every Major Turn in Crude Oil Since 1993.”

Get started by following this link: “The Forecasting Tool That Called Every Major Turn in Crude Oil Since 1993.”

This article was syndicated by Elliott Wave International and was originally published under the headline Gold and Oil: Be Aware of the “Spike”. EWI is the world’s largest market forecasting firm. Its staff of full-time analysts led by Chartered Market Technician Robert Prechter provides 24-hour-a-day market analysis to institutional and private investors around the world.