A Reason to be “Extra-Attentive” to Stock Market Sentiment Measures

– Extreme investor sentiment, whether bullish or bearish, is often a sign that a financial market is on the cusp of a turn.

Here’s the reason: When almost everyone is bullish (or bearish), there’s almost no one left to push the market higher (or lower).

Having said that, an extreme market sentiment can become even more extreme before a trend change occurs. So, an investor should not rely solely on sentiment measures when making portfolio decisions. In other words, sentiment measures should be put into context with technical indicators, the Elliott wave model and other factors which an Elliott wave expert may consider important. 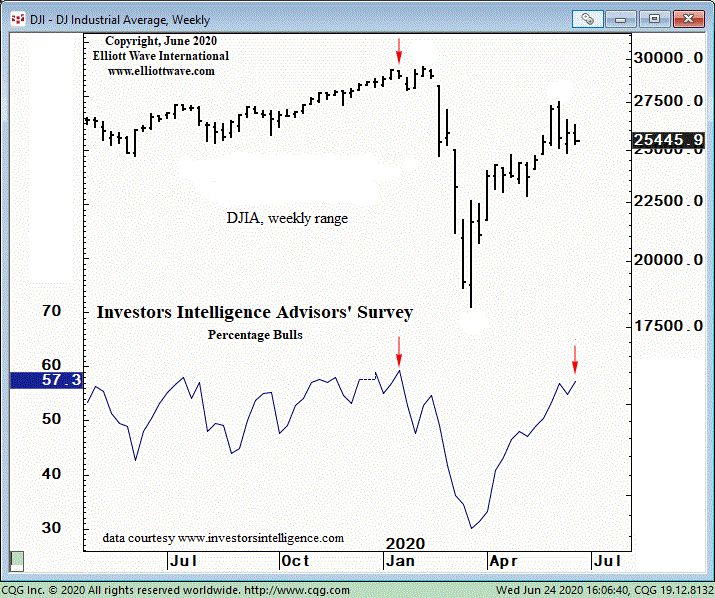 This week’s release of the Investors Intelligence Advisors’ survey shows another measure where optimism is now higher than it was at the February 12-19 stock market peak in the blue-chip indexes. The percentage of bullish advisors is up to 57.3%, the highest total since January 21, as denoted by the red arrows on the chart. By the end of March, the Dow was 38% lower. Extreme sentiment can remain extreme, so it’s not an automatic reason to be bearish the market. But the fact that advisor optimism is increasing while nearly every stock index is declining, save the NASDAQ, is a reason to be extra-attentive. …

Yes, there are even more measures of extreme elevated sentiment that investors need to know about.

That issue of the June 24 U.S. Short Term Update also referred to record levels of investor optimism in Small Trader call buying, the total number of DARTs at the two largest U.S. discount brokerage firms, and the off-the-chart exuberance by institutional investors in the amount raised for blank-check IPOs.

Plus, here are two recent headlines:

Well, the stock market’s Elliott wave pattern, plus the extreme bullish sentiment, provide a high-confidence answer to the question of “What’s next?”

Learn more about the Elliott wave model by reading the online version of the book, Elliott Wave Principle: Key to Market Behavior.