U.S. Dollar: When Almost Everyone Is Bearish…

– June started off with speculators decidedly negative toward the U.S. dollar.

On the second day of the month, the Financial Times said: 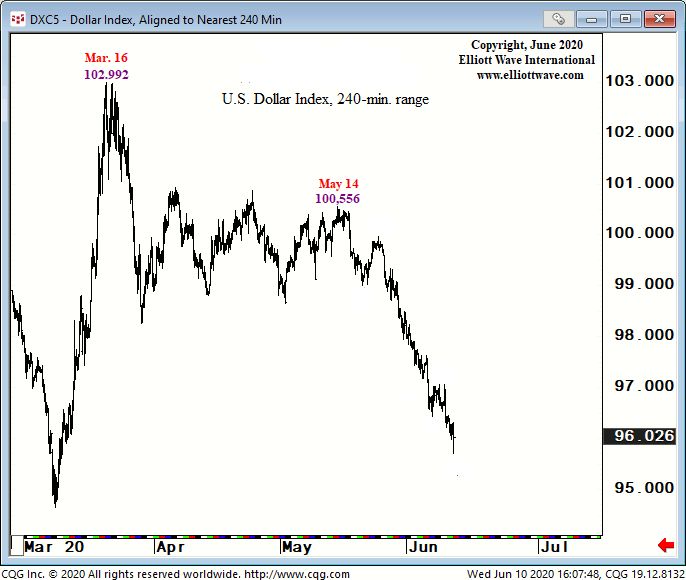 
The decline from 100.556, the May 14 high, is progressing as an impulse. … Once [the currently unfolding] wave is complete, the U.S. dollar will rally. … Sentiment is rapidly becoming bearish to the extreme. The U.S. dollar DSI (trade-futures.com) is at 22%, nearly matching the 20% that coincided with the March 9 low.

Even so, two days later, a June 12 Reuters headline read:

And, talk about bearish – three days after that, a CNBC headline said (June 15):

One of the world’s leading authorities on Asia … is worried a changing global landscape paired with a massive U.S. budget deficit will spark a dollar crash.

His forecast calls for a 35% drop against other major currencies.

Yes, it’s true that the U.S. is running a big budget deficit. It’s true that there are still riots in the streets, in parts of the country. It’s true that COVID-19 cases are on the rise, the economy is on the ropes and the unemployment is the highest it’s been since the Great Depression.

But, from Elliott Wave International’s 40-year experience observing and forecasting the markets, our analysts know it’s better to pay attention to the greenback’s Elliott wave structure and other supporting factors rather than “bearish fundamentals.”

Here’s just one example as to why. On April 30, 2011, a Wall Street Journal article cited fundamentals as a reason for the then dollar’s downward slide:

The main drivers of the dollar’s weakness, say economists, are the twin pillars of economic intervention: monetary and fiscal policy. “The market is concerned about the deficit and the Fed,” says [a] fixed-income and foreign-exchange analyst. …

Well, five days after that article published, the buck hit a major bottom and went on to rally for several years!

Getting back to 2020, as of this writing on June 22, the U.S. Dollar Index remains above its June 10 low. Despite all the “bearish fundamentals.”

The U.S. Dollar Index [has been] rising in a well-defined channel since February of 2018. This channel should remain intact as the index advances.

[Ralph N. Elliott, the founder of the Wave Principle,] noted that a parallel trend channel marks the upper and lower boundaries of an impulse wave, often with dramatic precision. You should draw one as early as possible to assist in determining wave targets and provide clues to the future development of trends.

You can learn more about “channeling” by reading the online version of Elliott Wave Principle: Key to Market Behavior for yourself. You can do so – free!

All that’s required is a free Club EWI signup. If you’ve never heard of Club EWI, it’s the largest educational Elliott wave community in the world. Members get free access to a wealth of Elliott wave resources.

Follow the link and you’ll be on your way to expanding your knowledge of the Wave Principle — free: Elliott Wave Principle: Key to Market Behavior.

This article was syndicated by Elliott Wave International and was originally published under the headline U.S. Dollar: When Almost Everyone Is Bearish…. EWI is the world’s largest market forecasting firm. Its staff of full-time analysts led by Chartered Market Technician Robert Prechter provides 24-hour-a-day market analysis to institutional and private investors around the world.

Uncategorized
← What Resource Companies Are on This Fund Manager’s Buy List?
Trinidad & Tobago holds rate, liquidity up after March cut →