When You Reward Failure, You Encourage Fraud

Bob Moriarty of 321gold expresses his views on the potential bailout of industries.

Sigh! We missed a great chance to make the world a better place. Perhaps we can do better this time around.

The banks and powerful corporations who have controlled the US government for the last fifty years are in the process of trying to raid the last of the treasure from US vaults. They want their servants in government to reward them for their fraud and utter stupidity. It would be a crime of the first order to allow this.

It began in the summer of 1944 at Bretton Woods in New Hampshire. The conference agreed that the US dollar should become the world’s reserve currency and be directly tied to gold. Most other countries linked their currency to gold by linking to the dollar.

This gave the US a giant competitive advantage. If the US wanted dollars to pay for goods or services, all we had to do was run the printing press. If any other country needed dollars, they first had to produce goods or services and trade them to us.

The US was pretty close to being King of the World and boy didn’t we know it? The US became the Exceptional Nation because we were so wise and wonderful and rich. Actually it was merely because we had the reserve currency but why bother with pesky details?

As time went by American politicians became more and more corrupt with power. Power does corrupt and absolute power does corrupt absolutely. The US has pretty much been in a state of continuous warfare off and on since the Spanish American war. That went into high gear when Congress created the CIA in 1947. Everyone became our enemy.

Alas, wars cost money. Actually wars cost a lot of money and by the trailing days of the Vietnam fiasco in 1971 the US could no longer hand over gold bars in exchange for worthless pieces of used toilet paper.

Which reminds me, the government is going to issue a new crypto currency based on the value of toilet paper. It is to be called butt-coin. 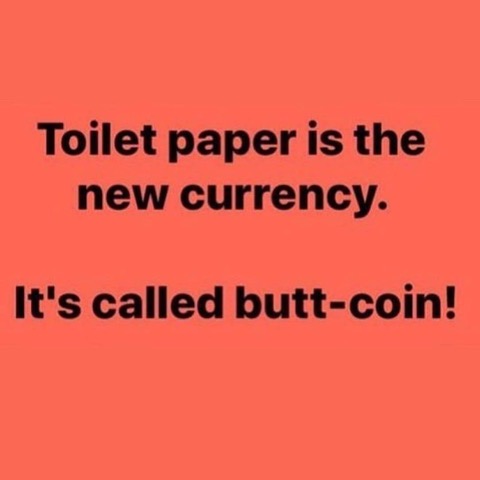 Incredible stupidity and fraud in the sub-prime mortgage area on the part of banks caused the GFC in 20072009. The banks and financial institutions that caused the problem were the first to whine to the FED that they needed to be bailed out. So we did. And we had a wonderful moment in time where we should have let the bastards burn and brought marshmallows to the fire.

Fast forward to the start of the Greatest Depression. The coronavirus has destroyed the travel industry. Cruise lines are history. The major US airlines are screaming for a government bailout. Boeing claims they need $60 billion of taxpayer money or they go under.

While you can, go to the store and buy a big bag of marshmallows and fine a long stick. We need to let these bastards burn and go out of business. But we could have a great marshmallow roast while they fry.

The big four American airlines spent $43.7 billion on share buybacks in the last eight years. Stock buybacks have been prohibited since the Great Depression because we knew they were good for shareholders and bad for the economy. It was only after 1982 that buybacks were legalized again. Now the airlines want taxpayers to fork over $50 billion.

Let me point out the obvious that everyone else seems to ignore. If Delta, American, United and Southwest all go belly up, not a single flight would stop, not a single employee (except for maybe the CEO and CFO) would lose their jobs. We need airlines and when the virus is in the rear view mirror we will need these airlines and crews.

But while the shareholders benefited from $43.7 billion in buybacks, they should bear the burden of bankruptcy. If the bondholders and shareholders lose money why would we care? Let them burn down and start over. That’s what bankruptcy is for. That’s also what big bags of marshmallows are made for.

Boeing used to make great aircraft. They should, after all, engineers ran the company. But as time passed the bean counters took over. I can hear it now, “Why do we still install two of those sensors? You rarely need two, we can save $500 per aircraft if we only install one sensor.” That’s bean counter thinking. Engineers say, “It’s possible that in 200,000 hours of flight we could have a sensor go bad. We really need to be installing two. It might cost us a little more but it will save lives in the end.”

Boeing has propped up their share price by an astounding $43 billion over the past eight years. Now they are the leader of the pack in pitching the government for $60 billion in bailout money. Naturally they would get the lion’s share of the money.

You can turn every tree in California into paper and you still cannot bail the US economy out. We have gone over the edge and have slid right into the Greatest Depression. We need to do what we can to produce medicine and to provide medical care for the millions of Americans about to come face to face with the coronavirus. Tens of thousands of small businesses are being destroyed as I write. Many will never recover no matter what the government does.

But we need to recognize right now that there are very real limits to what government can afford and should do. Bailing out shareholders of companies run by idiots for the sole purpose of enriching shareholders would be as close to insanity as you can find. Boeing will still build aircraft but will be under different ownership. All the airlines will still be flying but will have new shareholders. Banks will still do what banks need to do.

They just don’t need to do it with taxpayer money. Do you want to put your grandchildren into debt slavery on behalf of the shareholders of these companies?

If they fail, let them fail. That’s why we have bankruptcy laws. Rewarding people for fraud and stupidity is a sure road to disaster. Human stupidity is limitless. Government funds are limited.