Everyone is talking about the ‘hawkish cut’ and the reweighting taking place in FX.

The strength of the USD should not be underestimated, it has seen GBP, AUD, EUR and NZD get pounded to multi-year lows.

It was even more painful when you factor in Powell’s testimony; his bumbling and inability to clarify the Board’s reasoning for cutting rates put an even bigger rocket under the USD and will have hurt positions.


However, since the FOMC meeting the dust has settled a bit. Market pricing of the Fed Funds futures has actually returned to levels seen pre the July 31 st meeting. The most notable part is the October 30th meeting is being price at an 82% of another cut.

This should filter into FX over the next period, make no mistake the higher the USD goes the bigger the risk setbacks build in markets. The Fed and the President for that matter will want to address this quick – accommodation is still coming.

However, there is another trade that is presenting here post the Federal Reserve – XAU

XAU’s initial reaction to the ‘hawkish cut’ was a swift move lower. However, this dip was quickly bid up by the market as its focus shifted to the economic implications of the Hawkish Fed. Sentiment also seen in US equities and the broader risk-off sentiment which supports our trade idea in gold, this being:


Over the past month XAU as broken out of its long-term wedge pattern formed in late July 2016 to August 2018. Creating a new trend line starting from the August 18 low to July 19 high, which has now created a $1,453 resistance level. 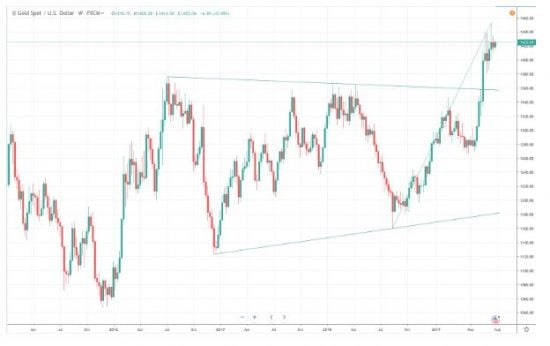 If we look at levels past the $1453 resistance XAU would effectively open up a new topside and the trend lines suggest there could be a continuation to a new level of $1,568 to $1,595 on a Fibonacci derivation. Thus a break here would see us adding to our trade.

Adding the technical to the fundamental justification an XAU long position could be advantageous.