Who Are The Gold Buyers That Pushed The Price Over $1,400?

In June, the gold price finally broke above the $1,400 level after five long years. So, who was responsible for pushing the gold price to a new high since 2013? Well, if we look at the data, it most certainly wasn’t the physical gold investor. And, according to several dealers I spoke with, physical gold retail investors took advantage of the $1,400+ price to sell metal rather than be big buyers… which I found quite interesting.

However, if we understand the psyche of the smaller retail investor, it’s not all that surprising. The retail physical gold investor tends to buy more metal when there is fear, financial instability, or extreme price volatility in the markets. So, if it wasn’t the physical gold investor responsible for the $1,400+ price move… then who was? It was the Paper Gold Buyer.

Thus, in a strange and odd sort of way, we can thank the Paper Gold Buyer for pushing gold above the critical $1,360 level that I wrote about in my article, FINALLY… GOLD BREAKS OUT THROUGH KEY 5-YEAR RESISTANCE LEVEL. Here we can see gold finally pushing through the key $1,360 level in this monthly chart: 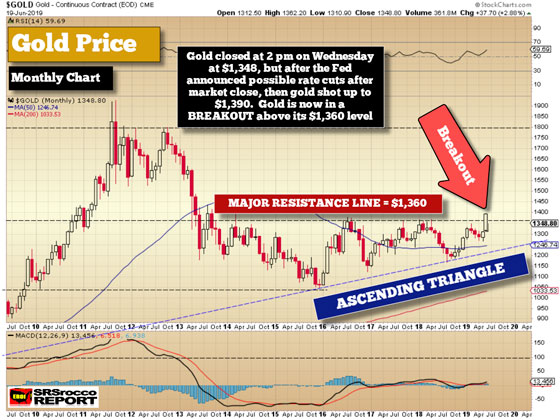 
As I mentioned in several articles, Traders, Hedge Funds, and Institutions look at crucial support and resistance levels, whether or not precious metals investors follow Technical Analysis. So, when gold finally broke above that $1,360 level, it shut up all the way to $1,440 before correcting. While the Technical Analysis pointed to a breakout above $1,360, it was the announcement by the Fed of possible rate reductions that caused Traders, Hedge Funds and Institutions to push gold to five-year highs.

And, if we look at the Global Gold ETF Flow data put out by the World Gold Council, June 2019 had the highest amount of inflows for the past seven years: 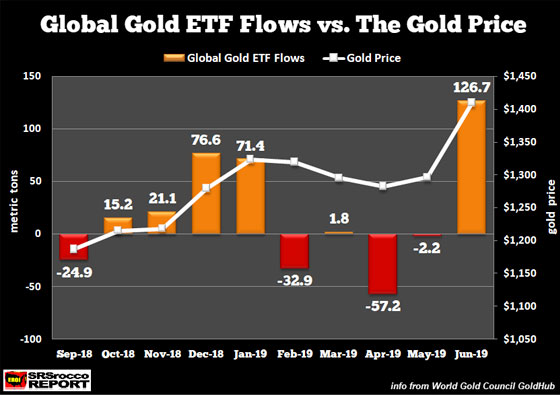 We can see that when the broader markets were crashing in December 2018, the gold price shot up as well as the inflows into the Global Gold ETFs. However, after the Fed came back in and reassured the markets, along with the record 4 trillion Yuan pumped into the domestic Chinese market in January 2019 by China’s Central Bank (source: Mike Pento interview Greg Hunter), the gold price subsided in the following months as did the demand for Gold ETFs.

It wasn’t until the Fed did an about-face in June and announced that it would seriously consider cutting rates in July did the gold price spike above $1,400… due to huge paper gold demand on the COMEX and Global Gold ETFs. According to the World Gold Council, Global Gold ETFs experienced a 126.7 metric ton net inflow in June, the highest monthly amount in seven years.

Now, I don’t know if all the physical gold made it into these Gold ETF’s last month or if the custodians hold all the gold they report in their inventories. I am not a paper gold investor, but I look at what happens in the Global Gold ETFs as a BAROMETER of price and the market.

So, what did the retail physical gold investor do as the price hit a new high after five years? Well, it seems as if they took this opportunity to sell a lot of metal, quite the opposite of the Paper Gold Buyer. And we can see this in the very weak demand for the U.S. Mint Gold Eagles. The U.S. Mint reported sales of only 5,000 oz of Gold Eagles in June: 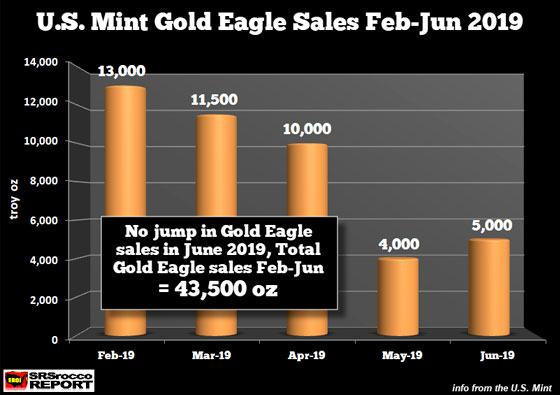 As we can see, Gold Eagle sales have been trending lower since the beginning of the year. I omitted sales in January because they usually are quite high due to the new issue being released. Regardless, demand for Gold Eagles continues to be weak, suggesting that the physical gold investor is not motivated to buy at this time.

Of course, the figures reported by the U.S. Mint are for the Authorized Purchases, who sell to the public, but they are a good indicator of the overall demand by the physical investor. For example, when the announcements for England’s Brexit vote (to leave the European Union) as well as the Chinese Government Yuan-denominated gold benchmark in April 2016, the U.S. Mint Gold Eagle sales surged: 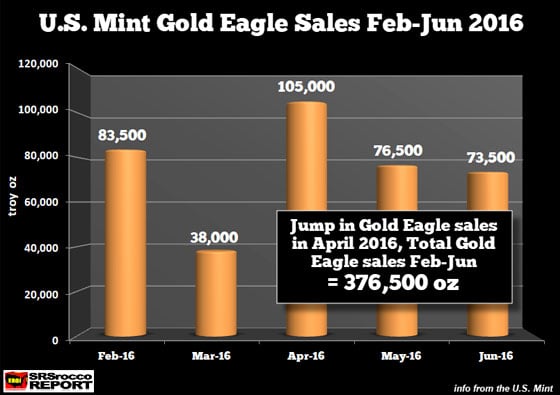 Sales of U.S. Gold Eagles rose to 105,000 oz, up from 38,000 during the previous month. Also, the gold price bottomed in January 2016 at $1,097 and surged nearly $200 to $1,285 by April. However, as the gold price increased to $1,366 in July 2016, Gold Eagle sales fell to only 38,500. So, it doesn’t seem like the short-term price rises are the primary motivation for the physical retail gold investor. Rather, retail physical gold investors tend to buy more when there is Fear, Financial Instability, or significant price volatility… such as gold reaching new highs or lows.

Also, if we compare the five months of Gold Eagle sales from 2016 to 2019, we see a striking difference:

Gold Eagle sales were more than eight times higher in Feb-Jun 2016 than they are this year. This suggests that the physical retail gold buyer is not the key driver of price; it’s been the paper gold buyer. That being said, I believe we are going to finally see a RECORD amount of physical gold buying when we see a huge increase in FEAR and FINANCIAL INSTABILITY as the economy and markets finally head over the cliff.

Precious metals investors need to understand that there are two Gold Markets… one physical and one paper. While we attribute manipulation and market rigging to the paper gold market, it has also been the leading driver of price, whether we like it or not. Sure, if investors could only purchase physical gold and not the hundreds of thousands or millions of COMEX Paper contracts and Gold ETF shares, then we would see a much higher gold price… but the entire market is set up that way.

For instance, the U.S. Government creates money to either issue or buy back U.S. Treasuries. So, there isn’t just manipulation of gold and silver; IT’S EVERYWHERE. And, as I have mentioned, why would investors buy gold and silver right now when they can make 200-300% in stocks such as ROKU: 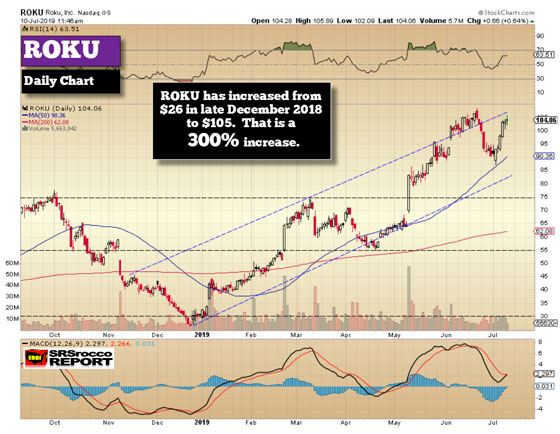 ROKU’s stock price is up 300% from its low in December 2018. ROKU still hasn’t made any real money, even though analysts say that it will take five years for the company to be profitable. I can assure you, that when the markets finally correct and the economy heads into an overdue recession (or possible depression), ROKU will not be making profits.

The gold price shot up today after Fed Chair Powell announced that a rate cut in July was still possible. Thus, the markets took Powell’s commentary as being very Dovish, which pushed the Dow Jones Index up 180 points at the high. This is the sort of insanity now that has taken over the market.

Lastly, when the Fed and Central Banks lose control of the markets, watch as physical gold and silver buying reach levels never seen before. While its highly likely the paper gold buyers will breaking new records in the COMEX and GOLD ETFs, the real winners will be acquiring the PHYSICAL METAL.