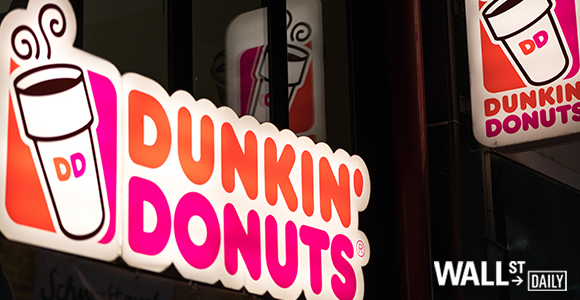 JAB Holding Co. is rumored to be considering a takeover of Dunkin’ Brands (NASDAQ: DNKN).

If the deal is consummated, Starbucks (NASDAQ: SBUX) would be the last publicly traded coffee stock.

That is because JAB would own virtually every other coffee asset.

Dunkin’ Brands, along with its $5 billion market capitalization and its 20,000 locations, is the next target.

If the coffee craze has staying power, then JAB Holding Co. is a king.

But if the brown bean fades, then JAB is a pauper.

Here’s what you need to know now.

All Hail the Caffeine King

You might call them crazy now, but JAB Holding Co. knows exactly what they’re doing.

Coffee is a legal drug — with millions of addicts around the world.

In the U.S. alone, 62% of Americans drink coffee daily, according to the National Coffee Association.

And Bloomberg noted that coffee demand, fueled by millennials (adults aged 19–34), has surged to historic records.

But here’s the thing…

Unless global temperatures halt their rising pace, coffee beans could be extinct by 2080.

Yes, you read that right.

Coffee as we know it is brewed primarily from two species of beans: robusta and arabica.

Robusta beans are generally easy to grow and harvest — and, as a result, cheap for consumers.

But the coffee brewed from these beans is often harsh in taste and acidic in body.

Arabica beans, on the other hand, produce the flavorful, high-end coffee that most of us know and love.

These beans require high altitude and a tight temperature range of 64–70 degrees Fahrenheit to grow optimally.

As you can imagine, Arabica coffee is more difficult to produce and extract.

Well, thanks to global warming, it’s going to get a whole lot harder for coffee farmers.

According to a report from the Climate Institute, at the current pace of climate change, the amount of suitable farmland available to grow coffee on will be halved by 2050.

So unless demand drops over the next 40 years, a major coffee supply crunch is looming.

Anticipating soaring coffee prices, JAB is gobbling up every major coffee maker it can get its hands on.

An Unlikely Boost From Technology

In the next decade, coffee chains will see a sudden spike in business thanks to the expansion of self-driving cars.

Well, currently, commuters who want their morning cup of joe have three choices:

With self-driving cars, the hasty cup at home — and the disgusting office cup — will be history.

Commuters will buy coffee from their favorite chain and drink it leisurely while a robo-car drives them to work.

There is thus substantial upside for coffee chains like Dunkin’ Brands.

Its broad network of suburban locations in strip malls and residential areas will capture more of this new market than Starbucks, which is driven more by urban foot traffic.

Current forecasts indicate that one in four cars will be self-driving by 2025 or at latest 2030. Initial market penetration will be greatest among affluent commuters in distant suburbs, who currently have the most taxing commutes.

Coffee chains with outlets in the outer suburbs are thus due for a major upsurge in demand in the next few years.

Time to Buy the Doughnuts and the Coffee

“Coffee is not an extravagance but rather a caffeinated beverage that transforms zombies to humans,” says the Thrillist’s Sam Blum.

Count me among the faithful (and growing) group of consumers in need of a daily transformation.

According to the latest coffee drinking survey, which has been conducted since 1950 by the National Coffee Association USA, more Americans are drinking coffee every day.

As Jonathan mentioned above, 62% of Americans enjoy a cup of joe every morning — up from 57% in the previous year. Increases in consumption appeared in all age groups, too, including the notoriously unpredictable millennials.

“More of us are drinking coffee, and younger consumers appear to be leading the charge,” says Bill Murray, NCA president and CEO. “A steadily growing taste for gourmet varieties is also driving a wider trend toward specialty beverages.”

Although JAB’s purchase of Dunkin’ Brands might be expensive — and would create a near monopoly — there’s considerably more room for expansion.

Population growth alone adds another 20 million people to the pool of potential coffee drinkers each year.

More importantly, many markets in the West remain largely untapped, as they’ve long relied on tea, not coffee.

This untapped opportunity for converts is not lost on Dunkin’s management, either.

As you can see in the chart below from their recent company presentation, there’s nothing but upside for coffee consumption in the future, particularly in the West. The company could easily double its store count from current levels. 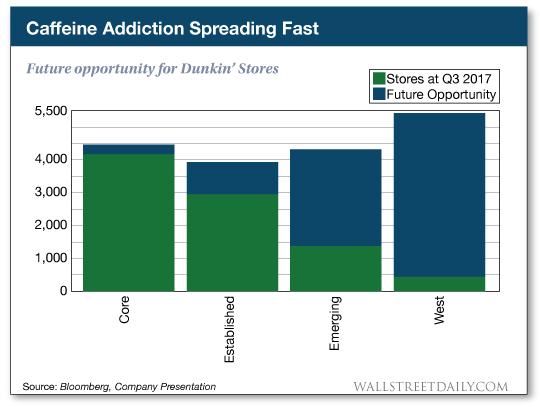 If you want to invest in the broader coffee growth trend, I recommend scooping up shares of Dunkin’ and Starbucks before there aren’t any publicly traded options.

Ahead of the tape,