Selling in the greenback is picking up this afternoon but there has been no clear extension of Friday’s losses after the payrolls report so far. While economists continue to pick over the second disappointing headline employment numbers and other figures from the monthly release potentially paint a more complicated picture on labour market tightness, the Fed can remain in its “wait and see” modus operandi with eyes on Thursday’s CPI report. 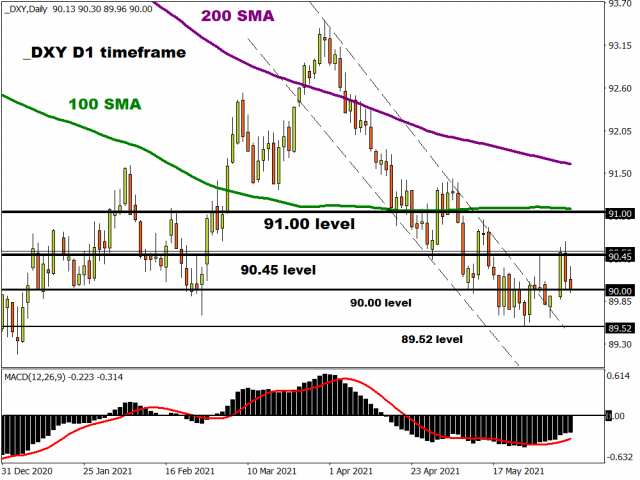 In fact, there are no Fed speakers this week as the FOMC is in a blackout period ahead of its meeting next week. This doesn’t stop the US Treasury Secretary, and former chair of the Fed from telling us what she thinks of the US economy! Treasury Secretary Yellen said over the weekend that higher rates “would actually be a plus for the Fed’s point of view” as she pushes for more government spending to take rates back to “normal” after being “too low for a decade”. Interesting words from Yellen, some might even say she is stepping into ground she shouldn’t be treading on?

US stocks open in the red

It’s a subdued start to the week for equity markets after global indices lifted near to all-time highs last week. Tech stocks had led the market on Friday after the NFP numbers but its once again the meme stocks that are takin the headlines in the first US trading session of the week. AMC stocks are up over 22%, Gamestop is up 6.5% and Blackberry has risen close to 11% as retail frenzied priced moves become increasingly concerning to some. The share of companies experiencing upgrades is now roughly at all-time highs and with analyst optimism at extreme levels, some market watchers are now saying that the next earnings season may be a major reality check for many investors.

As the dollar slides, so gold bugs find their feet and advance higher. While June hasn’t got off to the best start after May proved to be the best month for gold this year, the precious metal bounced off the upward trendline from the April low on Friday. With the 200-day SMA just below her around $1842, there seems to be solid support for gold to at least push to last week’s high at $1916. 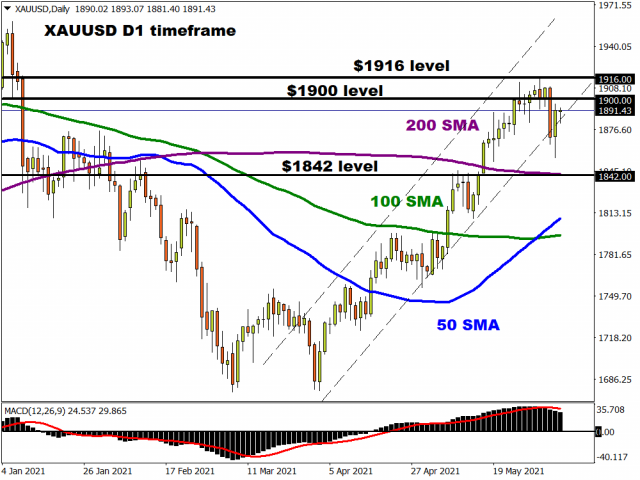