By Imraan Valodia, University of the Witwatersrand

The South African academic and economics community is still coming to terms with the passing of Professor Vishnu Padayachee, Distinguished Professor of Development Economics at the University of the Witwatersrand.

I first met Vishnu Padayachee when he walked into my Economics 101 class in 1983 at South Africa’s University of Durban-Westville to lecture on introductory microeconomics. He immediately made a lasting impression on me, and remained a mentor, friend, academic colleague and comrade until his passing on 29 May 2021.

As he began his lecture, I was immediately mesmerised by this urbane, genial, exceptionally articulate teacher. He made Economics 101 not only interesting, but also tinged with radical economic ideas.

For a young student growing up in apartheid South Africa this was truly extraordinary stuff. He introduced me to the work of the cutting edge thinkers of the time such as lawyer, sociologist, political economist and anti-apartheid activist Harold Wolpe, historian and Marxist activist Martin Legassick, academic and anti-apartheid activist Rick Turner, and the famous speech by the general secretary of the Federation of South African Trade Unions, Joe Foster.

None of this was on the economics curriculum and most of it was, at the time, banned. In those days, people went to jail for distributing this kind of material because it threatened the apartheid state and radicalised students. Suddenly, economics was exciting and I began to understand the world around me. These early years shaped my academic trajectory forever.

Over the years, Vishnu steered me toward a better understanding of the world, linked me up with new exciting research ideas, and encouraged me to strive for academic excellence. He had this effect on many, many others too. 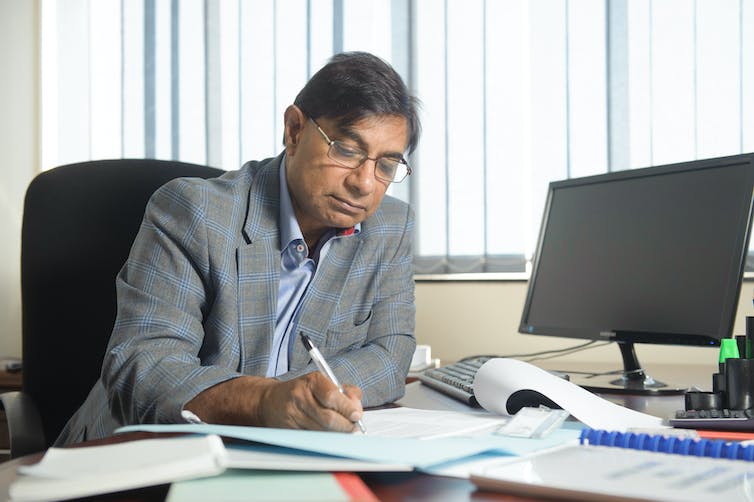 Professor Vishnu Padayachee. Supplied by University of the Witwatersrand

Vishnu was born in Umkomaas, South Africa on 31 May 1952. His father was a teacher and school principal. In those days, the life of an Indian school principal involved having to move from one little town to the next. Vishnu’s parents lived this life. As a result he was brought up by relatives, a relatively well off and globally connected family.

I think this upbringing was instrumental in Vishnu’s love for the good things in life – good food, sporty cars, good wine and the best whiskey – notwithstanding his lifelong work for a democratic and egalitarian society.

Vishnu studied at the University of Durban Westville, at the time the only place where Indians were able to study under apartheid’s strict racially-defined laws, completing a B.Comm, B.Comm (Hons) and M.Comm in Economics. He began working as a Junior Lecturer in Economics in 1977 and completed his PhD in 1989 at Natal University. He went on to have a stellar academic career.

He was recognised across the globe with appointments in Oxford and Cambridge and Johns Hopkins, where in 1985 and 1986 he taught a course on the political economy of South Africa under apartheid. These two years were significant in this formative stage of his academic career. It opened his eyes to a much larger academic world.

The early 1990s were exciting years in South Africa. Under the leadership of Jairam Reddy, the University of Durban Westville became a hotbed of intellectual activity as the democratic transition unfolded. Vishnu became Special Assistant to the Vice-Chancellor, building a new progressive university. He also contributed as an editor to the journal Transformation.

Vishnu was a leader in the Macroeconomic Research Group, an economic think tank to design post-apartheid economic policy set up by the African National Congress (ANC). He worked on some of the key economic questions during the transition and was part of the team that drafted the research group’s final report.

Sadly for Vishnu, the ANC largely ditched the report even before it was finalised. This became a focus of much of his later work, as he sought to explain why the ANC, a supposedly left party, opted for, in his view, a neo-liberal economic policy.

He joined the University of Natal (now University of KwaZulu Natal) in 1997 and headed the School of Development Studies for two spells during the period 2002-2011. These were intellectually exciting times. And the academic programme attracted the smartest students from all parts of the globe.

Vishnu led much of the initiative, built what many considered to be the among the world’s most innovative and productive development studies programmes, created a truly collegial community and mostly thrived at supporting us younger members of staff.

In 2013, the university’s management dissolved the school into a larger structure. Distraught, Vishnu withdrew and found new inspiring spaces at Rhodes University.

In 2014 he took up an appointment as the University of the Witwatersrand as Distinguished Professor and Derek Schrier and Cecily Cameron Chair in Economics. He helped develop the Applied Development Economics postgraduate programme, and contributed hugely to the development of the Southern Centre for Inequality Studies at the University of the Witwatersrand.

Notwithstanding ill health, this last period of his life was highly productive.

Given the volume and scope of Vishnu’s academic work, it would be impossible to capture all aspects of it. Three threads really stuck out for me.

First, his work on the economic policy in South Africa, which is unparalleled. It began with his early work on South Africa’s international economic relations, followed by the more voluminous work he did during the transition and then post-apartheid economic policy.

Second, his passion for economic history, including more recent work on central banking.

Third, the broad range of his work – from economics, central banking and politics to cricket.

Although he did have his fair share of academic fallouts, Vishnu had an extraordinary ability to engage across ideological boundaries. Though firmly in the left post-Keynesian economic camp, he was able to supervise students more firmly to his right on the political spectrum, and engage with academic disciplines from accountancy to politics. He never imposed his views but was always clear on where he stood on important matters of ideology.

He loved cricket and, more than anyone else I know, understood the intricacies of how the doosra was bowled, or the technical adjustment that South African cricket legend Hashim Amla had made to his batting.

Due to his poor health, I saw less of Vishnu over the last two years. But we continued to stay in touch.

First, his concern with the state of South Africa’s universities. It bothered him that South African universities were being distracted from the core pursuits of academic and research excellence and that increasing pressure on universities – from students demanding free higher education to political interference – was undermining their ability to retain the country’s place in the international scientific community.

Second, the state of economy and politics in South Africa. It depressed him that the party he supported so strongly in the 1990s and worked tirelessly for in the heady days of the transition, and the movement that he was a part of all of his life, had chosen a set of economic and political strategies that resulted in outlandish corruption, poverty and unemployment.

Finally, he sought to ensure that the autobiography of our mutual friend the academic and historian Bill Freund, Autobiography: An historian’s passage to Africa, just published by Wits University Press, be given the recognition that it deserved.

Imraan Valodia, Dean of the Faculty of Commerce, Law and Management, and Head of the Southern Centre for Inequality Studies, University of the Witwatersrand

This article is republished from The Conversation under a Creative Commons license. Read the original article.