Stock bulls appear to have found more comfort in pushing benchmark indices higher, after the Fed’s March meeting minutes showed that policymakers have a consensus that the US economy would need more time to reach a full recovery, as defined by the central bank’s targets for employment and inflation.

Fed Governor Lael Brainard used a TV interview appearance to remind markets that US economy still has over 9 million fewer jobs compared to pre-pandemic levels. Dallas Fed President Robert Kaplan and Chicago Fed President Charles Evans also appear to have downplayed inflation even if it were to reach 2.5% or higher, as long as it’s transitory and the overshoot eventually fades.

Until the hard data shows that the US economy is truly running hot and beyond the Fed’s tolerance, the US central bank appears poised to leave its policy support settings untouched in the interim.

The Fed has been buying $120 billion in bonds per month while keeping the benchmark interest rates near zero.

US equity futures are pushing higher at the time of writing, after the S&P 500 posted its highest ever closing price on Wednesday. However, this blue-chip index has been flirting with overbought levels, judging by its 14-day relative strength index, and has been testing the upper range of its trading bands. A breach of these key technical levels may signal that the index is ripe for a slight pullback. 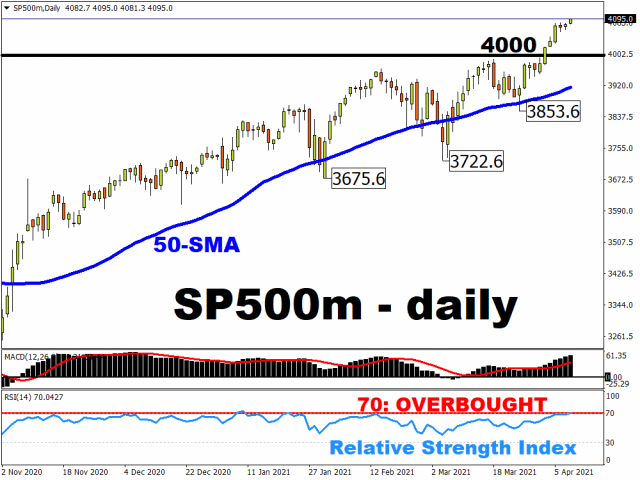 The communication services sector was the best performer on the S&P 500 mid-week, led by tech heavyweights such as Twitter, Facebook, and Alphabet. These 3 stocks, along with Snap, are the evenly-weighted constituents of the FXTM Social Media index, which also registered a new record high on Wednesday. Such a feat was enabled by the new record highs that Facebook and Alphabet posted yesterday, aided further by Snap Inc’s 15% surge so far in April. 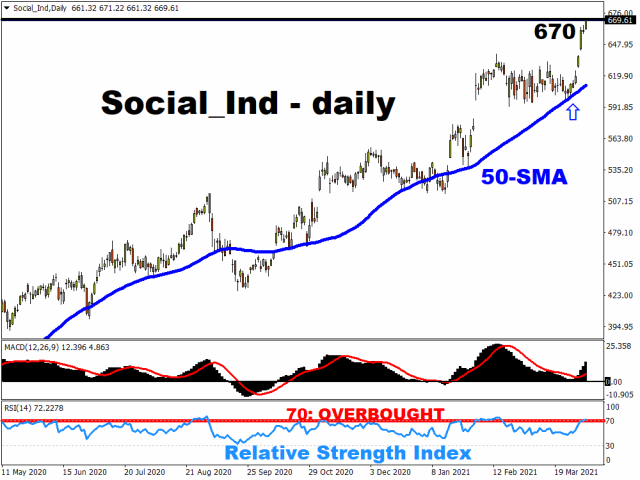 Since bouncing off its 50-day simple moving average, the FXTM social media index has advanced by more than 8% so far in April. For comparison, such gains far surpass the month-to-date climbs in other US benchmark indices:

The cool off in US Treasury yields has also contributed to this supportive environment for US stocks to realize more of their upside. 10-year yields have dropped by as much as 12 basis points this month, while stock market volatility, as measured by the VIX index, has moderated below its long-term average of 20.

What to look out for on Thursday?

While today’s serving of Fed speak is likely to continue in that dovish vein, investors must remain vigilant for any fresh clues about policymakers’ biases in their eventual response to a full US economic recovery.

And when that day comes and the Fed has to eventually pull back its policy support, there could be an almighty reaction across global financial markets, especially if the Fed does a poor job conveying its intentions. But until then, and as long as the Fed leaves its policy settings untouched, that should spell more upside for US stock markets.