In the past year, the stock market has been flooded by inexperienced investors.

The message of that headline matches up with the sentiment among many investors that the stock market is at the start of a boom — not near an end.

Yes, financial history shows that the same psychology has been on display before, i.e., the heralding of “The New Economy” in 2000 — just as stocks were topping. And, if you want to go all the way back to the 1929 top, the proclamation of “A New Era.”


There are other psychological characteristics on display here in 2021 that are rare.

One of them is a dismissal of the market admonitions from experienced market veterans — those who’ve lived through both bull and bear markets.

A backlash has emerged against the experienced professional, to the point that someone with “a knowledge of history and value is eventually judged as an impediment to success.”

Our April Elliott Wave Financial Forecast described another rare — if not “unprecedented stage” — of investor psychology. Here’s a chart and commentary: 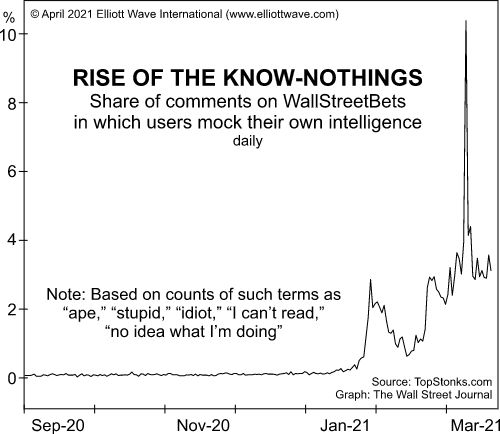 Newcomers now revel in their ignorance. The chart from The Wall Street Journal shows the “Rise of the Know-Nothings.” It’s derived from the postings on WallStreetBets’ Reddit forum of GameStop fans. In the wake of GameStop’s peak on January 28, the percentage of those professing stock market ignorance spiked to about 3% of those posting on WallStreetBets. The use of terms such as “stupid,” “idiot” and “no idea what I’m doing” identified the know-nothings. … The percentage of know-nothing references [spiked] to a high of almost 11% on March 14. So, the foundational basis for the New Era is idiocy.

The reason for pointing out these traits is that they seem to reflect a market psychology that signals an end — not the beginning — of a financial “boom.”

The best way to get a precise handle on the stock market is to review the Elliott wave pattern of the main indexes.

If you’re unfamiliar with the Wave Principle or need to brush up, here’s a quote from the Frost & Prechter’s Elliott Wave Principle: Key to Market Behavior:

In markets, progress ultimately takes the form of five waves of a specific structure. Three of these waves, which are labeled 1, 3 and 5, actually effect the directional movement. They are separated by two countertrend interruptions, which are labeled 2 and 4. … The two interruptions are apparently a requisite for overall directional movement to occur.

[R.N.] Elliott noted three consistent aspects of the five-wave form. They are: Wave 2 never moves beyond the start of wave 1; wave 3 is never the shortest wave; wave 4 never enters the price territory of wave 1.

R.N. Elliott did not specifically say that there is only one overriding form, the “five-wave” pattern, but that is undeniably the case. At any time, the market may be identified as being somewhere in the basic five-wave pattern at the largest degree of trend. Because the five-wave pattern is the overriding form of market progress, all other patterns are subsumed by it.

If you’d like to read the entire online version of this Wall Street classic book, you may do so — free.

All that’s required for free access is a Club EWI membership. Club EWI is the world’s largest Elliott wave educational community and is free to join. Members enjoy free access to a wealth of EWI resources on financial markets, investing and trading.

Simply follow this link to get started right away: Elliott Wave Principle: Key to Market Behavior — free and instant access.

This article was syndicated by Elliott Wave International and was originally published under the headline Investor Psychology: Here are 2 Rare Traits Now on Display. EWI is the world’s largest market forecasting firm. Its staff of full-time analysts led by Chartered Market Technician Robert Prechter provides 24-hour-a-day market analysis to institutional and private investors around the world.