The above list of Marvel Discovery Corp.’s (MARV:TSX.V; IMTFF:OTCQB) seven main properties/projects covers a lot of bases. Some say that uranium is the next hot sectorÖ. perhaps. However, there’s no doubt about nickel, copper, cobalt, platinum (but not palladium); those four are already very strongóat or close to multiyear highs.

It’s highly unusual to find a company with a diversified portfolio of attractive (early-stage) opportunities like these, valued at just C$4.6 million = ~US$3.6 million. This is absurd given the company’s existing assets, near-term prospects and expert deal-making team led by CEO Karim Rayani.

If Marvel’s share price were twice as high, I would be writing the same articleódescribing how undervalued this story is. Management changed the company name to Marvel Discovery Corp. to rebrand and reiterate the compelling risk/reward proposition available to investors. {please see Marvel’s new corporate presentation}

Yes, I realize it’s common for companies with multiple assets not to receive full credit for all of them. Asset portfolios can trade at a “conglomerate discount.” Yet, while the valuation of hundreds and hundreds of metals/mining/minerals juniors have soared, Marvel’s share price remains stubbornly below C$0.10.

This unwarranted valuation won’t last, there are too many good things going on, not least of which the proposed spinout of two projectsóSerpent River/Pecors and Wicheeda Northóinto a new publicly traded vehicle.

Both of these assets have significant Rare Earth Element prospects that would benefit from a dedicated management team focused on two projects, instead of seven.

Speaking of REEs, Marvel’s 100%-owned, 1,444-hectare property Wicheeda North in Prince George, B.C., is quite promising. And, CEO Rayani is having conversations about picking up additional land near Wicheeda North.

Make no mistake, this is an early-stage opportunity, but several REE prices have been on a tear lately. For instance, dysprosium and neodymium are up about 180% and 150%, respectively, from 2019ñ20 lows.

The market has noticedósending the average price gain of the top eight performing REE juniors up roughly 1,500% (from their 52-week lows). Unlike the >700 North American-listed gold juniors I’m aware of, there are only about 50 or 60 REE juniors, many listed in Australia. Marvel has two REE properties (the other is the polymetallic Serpent River/Pecors).

The 2020’s COULD be really big for REEs and UraniumÖ.

In addition to REEs, there’s an historical (Indicated) resource estimate of 14.8 million pounds of uranium at Serpent River. That’s not a giant size, but if uranium prices take off from the upper $20s/lb, this deposit could provide a launching pad for something bigger and better. Rio Algom reportedly mined >100 million pounds of U308 from similar deposits in the Elliot Lake camp.

Readers should note, the uranium price was 3x its current price, for years at a time, prior to the Fukushima Daiichi nuclear power plant disaster in Japan a decade ago (a tsunami took it out). That incident was a long time ago; a nuclear power renaissance is now underway.

Given a notable uptick in the number and severity of global storms and wildfires, decarbonizing the planet has taken on renewed importance. Nuclear remains the only clean, green, large-scale, baseload source of renewable energy.

But, I digress. REEs and uranium are not the main stories at Marvel, gold is. And, I promise to turn to gold after one more detourónickel and copper! Two portfolio projects have considerable nickel and/or copper upside. Both metals are high-tech and green, and easy to brag about. 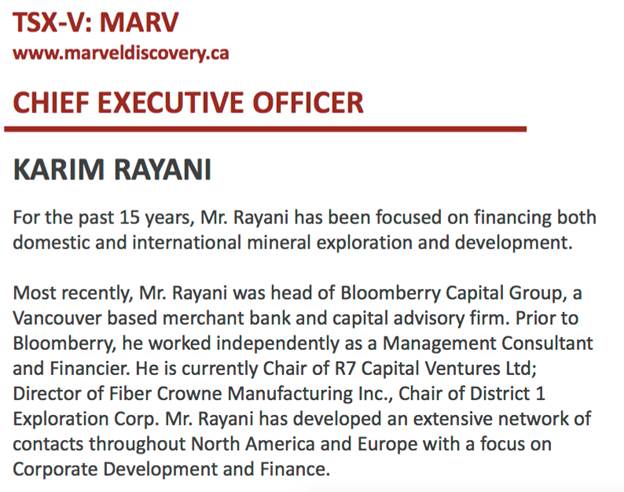 The 2020s WILL be really big for Copper and NickelÖ.

Nickel is increasingly used in rechargeable Li-ion batteries that power electric vehicles. These complex batteries use a range of metals (mostly cobalt, lithium, nickel, manganese). Of these four critical elements, only nickel content is known to be increasing.

More important than the metals mix is the incredible growth profile for global EV adoption. If one believes in the paradigm shift to EVs, one should be very bullish on nickel. Of course, no metal on earth is more hi-tech and green than copper. Fully electric vehicles use about 4x as much copper as conventional cars.

City-scale energy storage systems that store energy from wind and solar farms use copious amounts of copper for wiring and cables, and electrical for grid expansions. Tens of trillions of US$ will be invested in copper-intensive projects in the 2020s.

Readers may notice that I’m excitedly describing several metals/commodities. Some have brighter futures than others. Arguably, oil and thermal coal are not looking so good.

There’s been a great deal of talk lately about the beginning of a new super-cycle in commodities. Inflation is very likely to increase this decade, possibly by a lot. Commodities (hard assets) perform well during inflationary periods.

Newfoundland is one of the hottest jurisdictions in North America for gold. Marvel’s management team successfully negotiated and secured two properties over the past sixñnine months. These are promising properties near both Marathon Gold’s 4 million ounce, prefeasibility study-stage project and New Found Gold’s very high-grade, pre-maiden resource project.

Grab samples at Victoria Lake range from 15 to 25 g/t gold and up to 140 g/t silver. Slip Gold has seen surface samples as high as 44.5 g/t gold. Both properties are planned to be drilled this year.

In the Red Lake district, Marvel is earning into a 51% interest in the Camping Lake project. Camping Lake is within 20 km of Great Bear Resources’ blockbuster Dixie Gold project.

NOTE: {Karim Rayani is CEO of both Marvel Discovery Corp. and Falcon Gold, and he’s been actively buying shares in the open market of both companies}

Blackfly is ~14 km southwest along strike of Agnico Eagle’s 32k hectare, 5.6 Moz. Hammond Reef deposit. Mineralization at Blackfly is traceable over a 4.4 km strike length on the property. The best gold values come from prior operator TerraX Minerals about a decade ago. Grab samples include assays of 167 and 85.6 g/t gold.

In addition to Agnico and Marvel Discovery, companies including Abitibi Royalties, Greencastle Resources and Maxtech Ventures have also secured properties in the district. Some juniors with just one or two properties in the camp (and no other assets) have market caps as large or larger than Marvel’s.

Make no mistake, there are a number of high-quality, diversified natural resource juniors, but many have seen their valuations climb by 1,000%+ from last year’s lows. Marvel’s market cap of C$4.6 million = ~US$3.6 million is hardly a stretched valuation, especially if we’re headed into an epic bull market run, a new super-cycle, in commodities. {please see Marvel’s new corporate presentation}

Disclosures / Disclaimers: The content of this article is for information only. Readers fully understand and agree that nothing contained herein, written by Peter Epstein of Epstein Research[ER], (together, [ER]) about Marvel Discovery Corp. (formerly named Intl. Montoro), including but not limited to, commentary, opinions, views, assumptions, reported facts, calculations, etc. is not to be considered implicit or explicit investment advice. Nothing contained herein is a recommendation or solicitation to buy or sell any security. [ER] is not responsible under any circumstances for investment actions taken by the reader. [ER] has never been, and is not currently, a registered or licensed financial advisor or broker/dealer, investment advisor, stockbroker, trader, money manager, compliance or legal officer, and does not perform market making activities. [ER] is not directly employed by any company, group, organization, party or person. The shares of Marvel Discovery Corp. are highly speculative, not suitable for all investors. Readers understand and agree that investments in small cap stocks can result in a 100% loss of invested funds. It is assumed and agreed upon by readers that they will consult with their own licensed or registered financial advisors before making any investment decisions.

At the time this article was posted, Marvel Discovery Corp. was an advertiser on [ER] and Peter Epstein owned shares in the Company.

Readers understand and agree that they must conduct their own due diligence above and beyond reading this article. While the author believes he’s diligent in screening out companies that, for any reasons whatsoever, are unattractive investment opportunities, he cannot guarantee that his efforts will (or have been) successful. [ER] is not responsible for any perceived, or actual, errors including, but not limited to, commentary, opinions, views, assumptions, reported facts and financial calculations, or for the completeness of this article or future content. [ER] is not expected or required to subsequently follow or cover events and news, or write about any particular company or topic. [ER] is not an expert in any company, industry sector or investment topic.

4) The article does not constitute investment advice. Each reader is encouraged to consult with his or her individual financial professional and any action a reader takes as a result of information presented here is his or her own responsibility. By opening this page, each reader accepts and agrees to Streetwise Reports’ terms of use and full legal disclaimer. This article is not a solicitation for investment. Streetwise Reports does not render general or specific investment advice and the information on Streetwise Reports should not be considered a recommendation to buy or sell any security. Streetwise Reports does not endorse or recommend the business, products, services or securities of any company mentioned on Streetwise Reports.
5) From time to time, Streetwise Reports LLC and its directors, officers, employees or members of their families, as well as persons interviewed for articles and interviews on the site, may have a long or short position in securities mentioned. Directors, officers, employees or members of their immediate families are prohibited from making purchases and/or sales of those securities in the open market or otherwise from the time of the decision to publish an article until three business days after the publication of the article. The foregoing prohibition does not apply to articles that in substance only restate previously published company releases.