Key events this week: US inflation still all the rage?

At the onset of this new trading week, markets are reacting to the Senate’s passing of US President Joe Biden’s $1.9 trillion fiscal stimulus package over the weekend, which the House could then sign into law in the coming days. Asian stock markets are pushing higher, with futures contracts for the Dow Jones index and the S&P 500 following suit.

Hopes for more fiscal stimulus have been a bedrock for stock market bulls since last year, though now it could feed into heightened expectations that US inflation could come back with a vengeance, thanks to the trillions that the US government and the Fed have poured into the economy.

Here are some other key events and economic data that markets will be eyeing this week:

The Nasdaq 100 has endured three consecutive weeks of declines. However, it did manage to avoid a technical correction, which would have been 10% down from its record high in February, thanks to the buy-the-dip market action on Friday.

More selling of tech stocks could make precarious the Nasdaq 100 minis’ position above the 100-day simple moving average (SMA). The asset could then break below last Friday’s 12,212 support level, which was also a key region on several occasions in Q4 2020. To the upside, the 12,750 support-turned-resistance level is also one to watch for the immediate term.

At the time of writing, futures for Nasdaq 100 are tipping into the red and resting on their 100-day SMA. 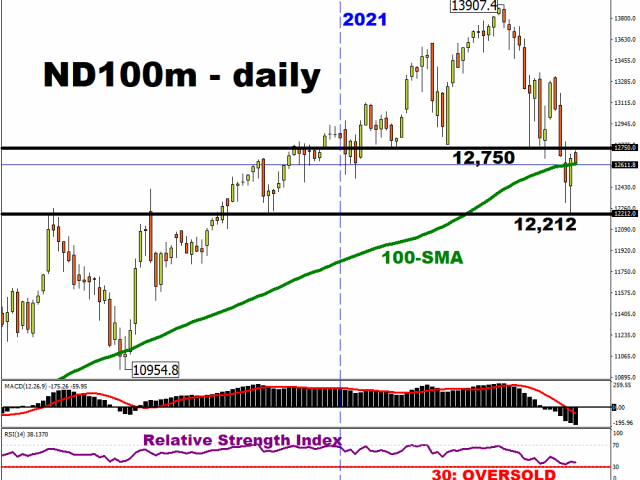 Much could depend on how Treasury yields fare in light of the imminent fiscal stimulus injection, and also around the mid-week release of the US February consumer prices index.

Should both events point to US inflation making a roaring return, that could exert more downward pressure on the Nasdaq 100. However, a softer-than-expected CPI could dampen yields and offer tech stocks some breathing space.

Investors would also have to juxtapose Wednesday’s backward-looking CPI with Friday’s forward-looking US consumer sentiment data. Should Americans be found raring to spend once more to overcome lockdown fatigue, that could translate into heightened inflation expectations and another surge in Treasury yields, while prompting further losses in the Tech sector.

With Fed members entering their blackout period ahead of the mid-March FOMC meeting, investors will be looking to the commentary by BOE Governor Andrew Bailey on Monday, as well as Thursday’s speech by ECB President Christine Lagarde after the European Central Bank’s policy meeting.

Global central bankers have been growing concerned that rising bond yields could tighten financial conditions, which could ultimately disrupt their respective economic recoveries.

Should either central bank official successfully dampen their respective bond yields and widen the gap with Treasury yields, that could weigh on their respective currencies while lending a further boost to the dollar index (DXY).

Note that the euro and the pound are the first and third largest constituents respectively on the DXY. Combined, the euro and sterling account for nearly 70% of the dollar index.

And should the GDP and industrial production readings from either side of the English Channel disappoint markets this week, that could further buffer support for the greenback which has been enjoying a resurgence of late, thanks to rising Treasury yields and also last Friday’s better-than-expected jobs report. 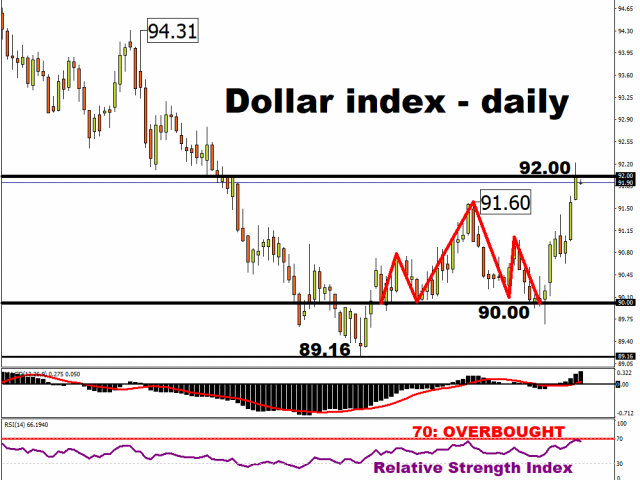