Why are tech stocks falling?

The Nasdaq 100 has just recorded its longest losing streak since October, having declined for 5 consecutive days. The tech-heavy index fell 2.63 percent to commence the trading week on a weaker note, in contrast to the Dow Jones index, which inched up 0.09% on Monday. 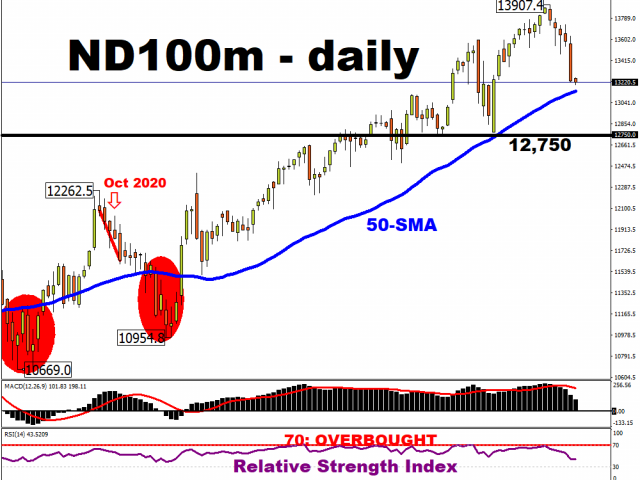 To be clear, the upward trend for the Nasdaq 100 remains intact, even as it looks destined to test its 50-day simple moving average (SMA) as a support level.


Tech stock fans can take heart that previous forays below the 50-SMA have proved fleeting; such has been the resilience of tech stocks.

The Nasdaq 100 minis still have to break below the 12,750 region in order to post a lower-low to potentially bring its upward trend to a shuddering halt.

But what could make things different this time?

What does the reflation trade mean for specific sectors?

The reflation trade suggests that stocks that are more exposed to the economic cycle stand to benefit at the expense of tech counters, which had been darlings amid the pandemic.

Here’s a snapshot of the reflation trade as per Monday’s price action within the S&P 500:

Also note that the concerns surrounding overstretched tech valuations are now coming to the fore.

Even after Monday’s declines, the Nasdaq Composite Index now has a PE ratio of 70.43, which is still more than double its average of 33.22 from the past decade. That’s in contrast to the S&P 500’s current PE ratio of 31.7, while the Dow Jones index’s PE ratio stands at 28.26.

In other words, non-tech stocks have plenty of room to catch up, while tech counters could have more downside to explore, as funds are rotated away from tech amid the reflation trade.

To be clear, this does not herald the capitulation of tech stocks.

Rather, it may be the case that tech stocks are set to lag behind other sectors that are exposed to the traditional “Main Street” economy that are more likely to benefit from more fiscal stimulus.

And as if to prove the point further, at the time of writing, the futures contracts for the Nasdaq 100 are edging lower while their counterparts for the Dow and the S&P 500 are little changed.

This suggests that the reflation trade is set to persist for a while longer, with tech stocks likely to languish out of investors’ favour for the time being.

Financial News Stock Market News
← Technical Outlook: Dollar Index depressed around 90
The outlook for Gold and Brent is very different from a year ago →
Featured Articles: