Twitter’s Q4 earnings are set to be released after US markets close on Tuesday, with its share prices currently at their highest levels since Feb 2014.

The stock has proven resilient even in the face of the pandemic and amidst political turbulence, having surged by more than 160% since the March 2020 bear market.

From a technical perspective, Twitter looks ripe for a sell-the-news event. After all, its 14-day relative strength index has already broken into overbought territory, which typically suggests that a pullback is in order, and possibly even healthy.


The catalyst for such a pullback could arrive when Twitter reveals its Q4 performance, which is set to unveil some strong numbers along the lines of what’s already been seen by other social media platforms such as Facebook and Snapchat for the same period.

The company’s top line is expected to come in at $1.19 billion, which is the second time its quarterly revenue has ever exceeded the $1 billion mark (the previous occasion was in Q4 2019). This was likely aided by the boost from the November 2020 US presidential election.

Twitter’s Q4 adjusted net income is set to register a year-on-year growth of 20.6 percent to $245 million, although it probably won’t be enough to offset a full-year loss of $307.6 million.

What will Twitter’s shareholders be paying attention to?

Shareholders are more likely to focus on how Twitter plans to enhance its mobile-ad products so as to help monetize its user base of over 190 million.

Twitter has clearly lagged other tech giants in being able to monetize its offerings. For context, Twitter’s 2020 revenue is expected to make up just 1/8th of Facebook’s net income for the year. According to EMarketer, Twitter’s market share for digital ads worldwide is a measly 0.8 percent.

Such is the disparity.

What are the downside risks to social media companies?

Social media platforms often get caught in the crossfires amid political chaos, from the US to Myanmar. From battling misinformation to removing accounts, such efforts require a tremendous amount of time and resources, which could weigh on Twitter’s bottom line.

And then there’s the public fallout to contend with as well. When Twitter banned former President Donald Trump from its platform on January 8th, many users pledged to jump ship too, prompting Twitter’s share prices to fall 12.2 percent in the week following the company’s decision. Although to be fair, the stock has recovered remarkably well since.

It remains to be seen how the likes of Twitter and the rest of Big Tech can handle the heightened scrutiny from lawmakers.

The risk of more regulations being imposed on social media platforms may serve as a headwind on these stocks over the near- to medium-term.

Twitter’s stock has, on average, seen an absolute one-day move of 12.7% after its quarterly earnings are released.

For this Wednesday, which would be the first cash session after its imminent earnings announcement, markets are already pricing in a similar move of about 12% either upwards or downwards.

Such a move could have a major impact on the FXTM Social Media index, which is an evenly-weighted index comprising the stocks of Twitter, Facebook, Google, and Snapchat. The double-digit, year-to-date gains in the likes of Google and Snapchat have been able to offset the declines in Facebook’s share prices so far in 2021:

Twitter is the last of the 4 constituents of the FXTM Social Media index to report its Q4 2020 earnings.

With the FXTM Social Media index trading near its record high, and having been in technically overbought territory over the past week, Twitter’s announcement could well determine whether the index has good reason push to a new record high in mid-week. 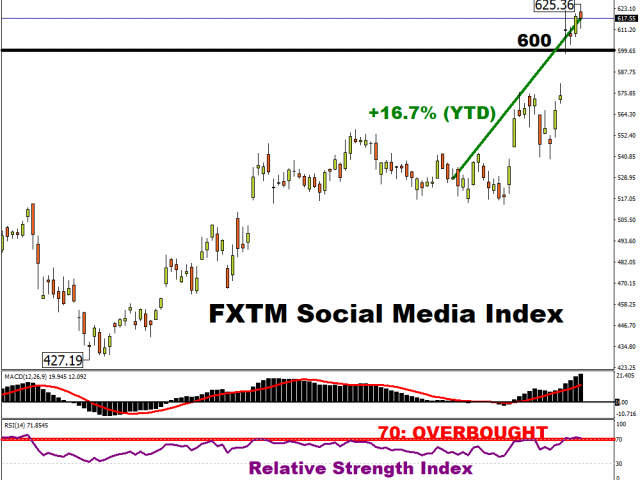