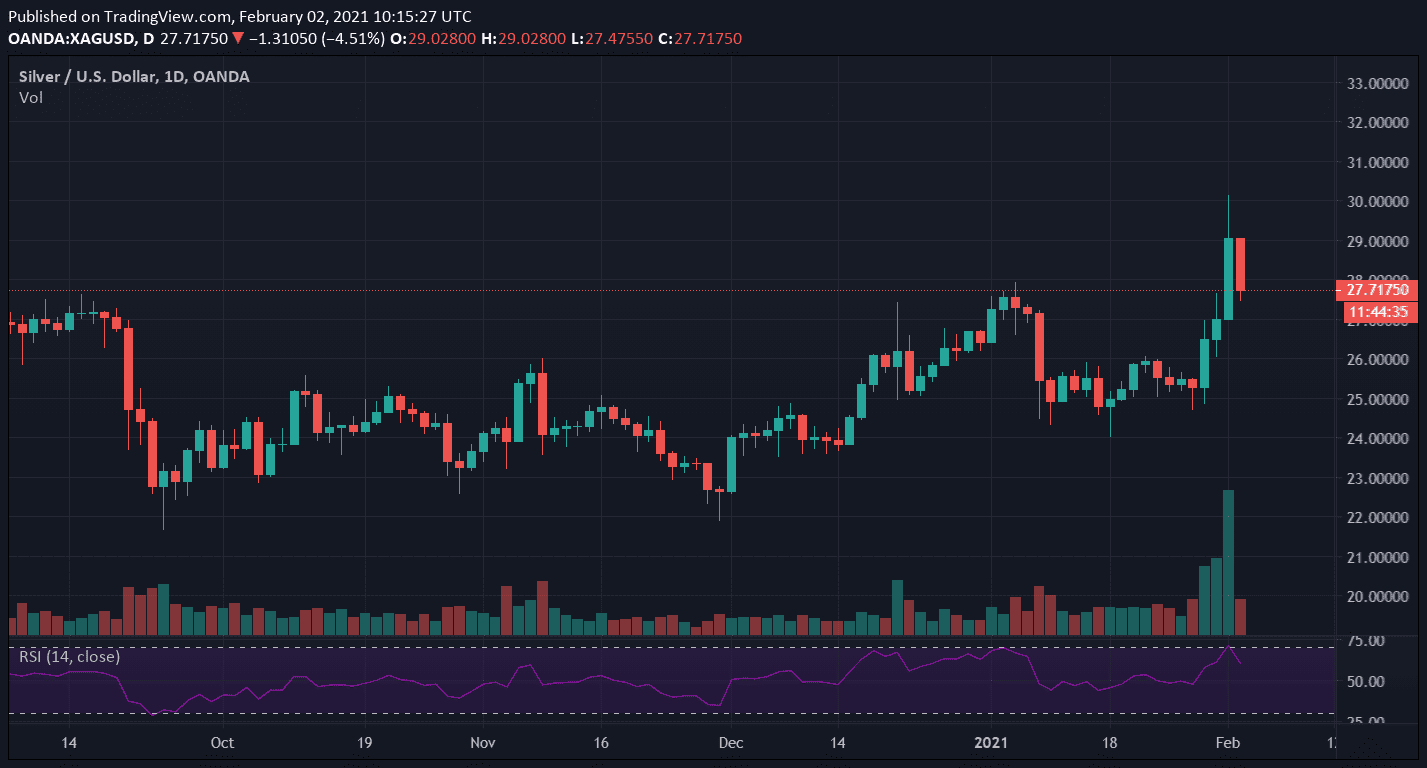 Silver prices slipped sharply lower in early trading on Tuesday. The precious metal reached an 8-year high on Monday, with prices rising slightly above the key psychological level of $30 per ounce.

Over the weekend, the hashtag “#silversqueeze” was trending on Twitter and on Monday, the mainstream media widely reported an attempted ‘silver squeeze’ by retail investors, such as those on Reddit’s Wall Street Bets sub.

However, many on the popular discussion and social news aggregation website now reject the idea. A popular Wall Street Bets thread suggests that the silver squeeze is a ‘hedge-fund coordinated attack’ – an attempt to distract investors from their long positions in GameStop (GME).


Mohamed A. El-Erian, Chief Economic Adviser at Allianz, highlighted the differences between a short squeeze in GameStop and silver in a tweet:

#GameStop and #silver are not the same for those pursuing the short squeeze trade The silver market is much larger; Existing shorts are smaller; Some of the #HedgeFunds that are short #GME are said to be long silver Bottom line: A dissimilar trade that eats away at #GME gains

Meanwhile, retail websites for buying silver bars and coins such as Money Metals, SD Bullion, JM Bullion and Apmex were swamped with demand over the weekend. Speaking on Bloomberg TV, Tyler Wall, president and chief executive officer at SD Bullion, said: “Pretty much physical silver is almost all gone in terms of live inventory.”

The Commodity Futures Trading Commission (CFTC) Acting Chairman RostinBehnam stated on Monday that the CFTC is “closely monitoring recent activity in the silver markets”, adding that it is “communicating with fellow regulators, the exchanges, and stakeholders to address any potential threats to the integrity of the derivatives markets for silver, and remains vigilant in surveilling these markets for fraud and manipulation.”