Crude oil prices have extended their 2021 rally this week with the market adding a further 3.3% as of writing.

Oil prices have been on an impressive run-up since November 2020. Better risk appetite and a weaker US dollar have helped prices along, in combination with improved demand expectations thanks to the global vaccination effort.

Expectations of forthcoming US fiscal stimulus have also helped risk assets. And as a result, oil prices have benefitted firmly from the broader pick-up in higher-yielding markets.

This week, the Energy Information Administration added further fuel to the fire.


The EIA reported a further drawdown in US crude inventories. This week marked the sixth straight week of declines in stock levels.

Headline inventory levels fell by 6.68 million barrels. This was more than six times deeper than the 0.9-million-barrel contraction forecast.

The continuing drawdown in US stockpiles reflects the ongoing pick-up in demand for crude amidst the backdrop of increased vaccine optimism.

Traders are eyeing a strong pickup over the second half of the year. The current outlook sees lockdowns easing and travel restrictions lifting.

Should this materialize, traders can expect a return of a large source of demand for oil.

Despite the drawdown in headline crude levels, gasoline inventories were higher again over the week, rising by 4.3 million barrels.

Gasoline stockpiles have risen as steadily as crude inventories have declined over the last six weeks.

Stockpiles are now back at their five-year average for this time of year. Distillate stockpiles, which include diesel and heating oil, were lower over the week, falling by 1.7 million barrels.

In terms of gauging demand, the total products supplied number averaged 19.5 million barrels per day over the last four weeks. This is down 5.8% on the same period last year.

This figure reflects a steady upward trend in demand for crude.

The gasoline products supplied number came in at 7.9 million barrels, down 10.1% on the same period a year prior.

Meanwhile, the distillate products supplied number came in at 4.2 million barrels, up 1.9% on the same period a year prior. 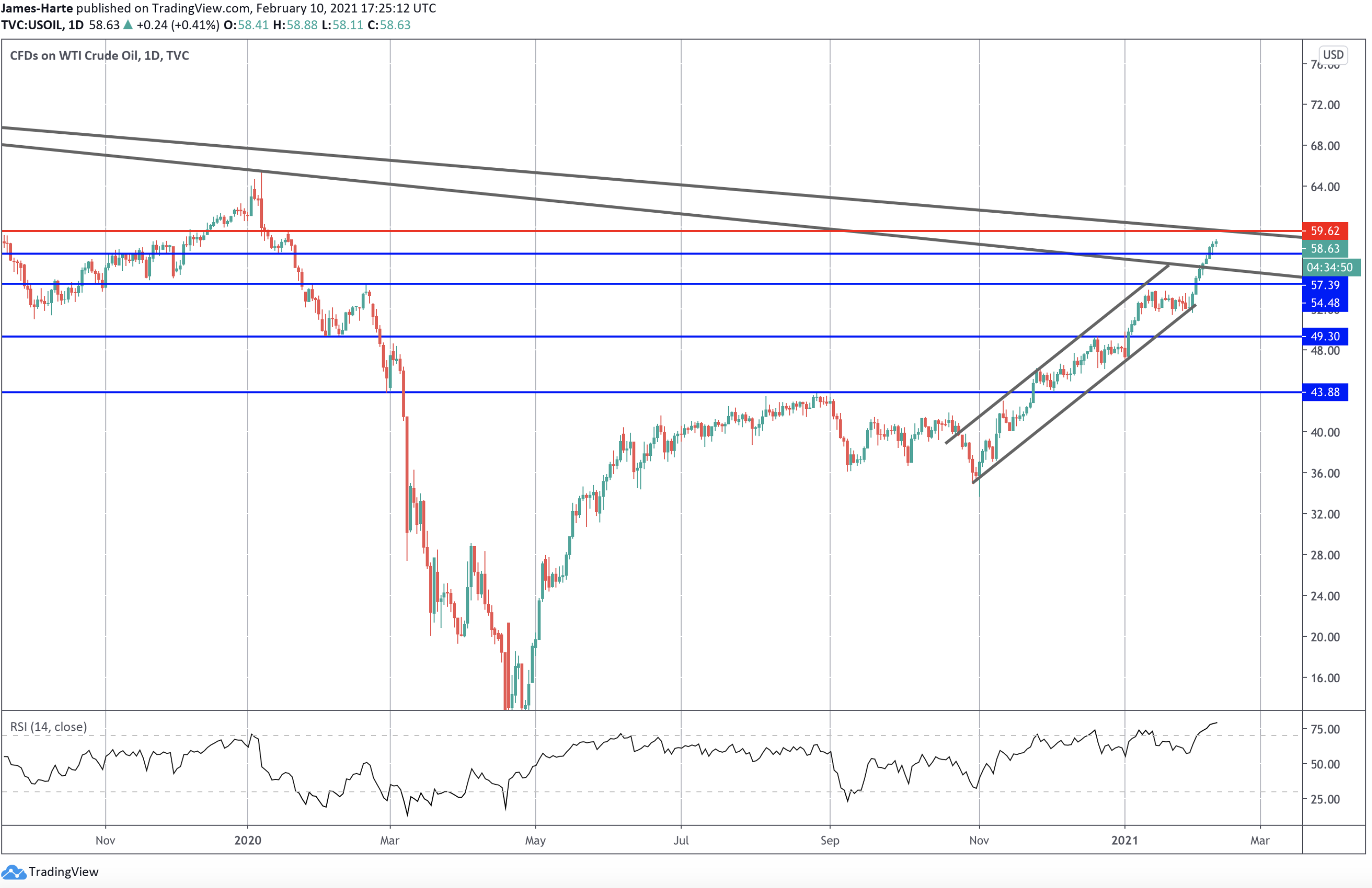 The rally in crude oil is starting to break some important technical levels now.

For now, oil prices look set to continue higher, supported by strong momentum on the RSI indicator. Should we see any correction lower, bulls will be looking to defend the 57.39 level to keep bullish momentum intact.