Shares in US technology company Cisco Systems are trading down off the recent highs this week. Following a firm rally across Q4 and early January this year, Cisco shares recovered from low 35s to highs of almost 50, marking a 40% rally.

However, shares have since corrected a little lower, with price falling back below the 48.48 level. The move lower as seen in response to a weaker than expected set of Q4 earnings for the company which completed five straight quarters of earnings misses.

Cisco reported fourth quarter earnings per share of $0.60, undershooting Wall Street estimates for a $0.76 EPS. Despite the miss on headline earnings, revenues came in above expectations at $11.96 billion, beating the $11.92 billion Wall Street was looking for.

However, the revenues beat was not enough to keep the Cisco rally in place with the company’s shares gapping lower at the open the day after reporting.

Looking at the breakdown of the company’s earnings release, the firm’s infrastructure platforms segment, which is typically its leading business, saw a 3% year on year decline in sales to $6.39 billion.

“The enterprise market remains soft, driven by some elongated sales cycles and a continued pause in spending amongst some customers brought on by the pandemic.”

The company’s applications unit, which includes Webex video-call products, saw $1.35 billion In revenues, roughly flat year on year, which was below the $1.40 billion Wall Street was looking for.

Looking ahead, Robbins said of the Webex products:

“I think over the next year you’ll see us actually — that portfolio will continue to improve, and I think we have a chance to take share back.”

One interesting aspect of the release was Cisco reporting that it had increased its offer to but Acacia Communications from $2.6 billion to $4.5 billion. Cisco also highlighted plans to purchases IMImobile for $730 million.

Looking ahead, Cisco offered guidance for the current quarter of between $0.80 and $0.82 on 3.5% – 5$ revenues growth. This was slightly above the Wall Street estimate. Although, again, it did little to detract from the final quarter of 2020 marking five straight quarters of losses for the firm. 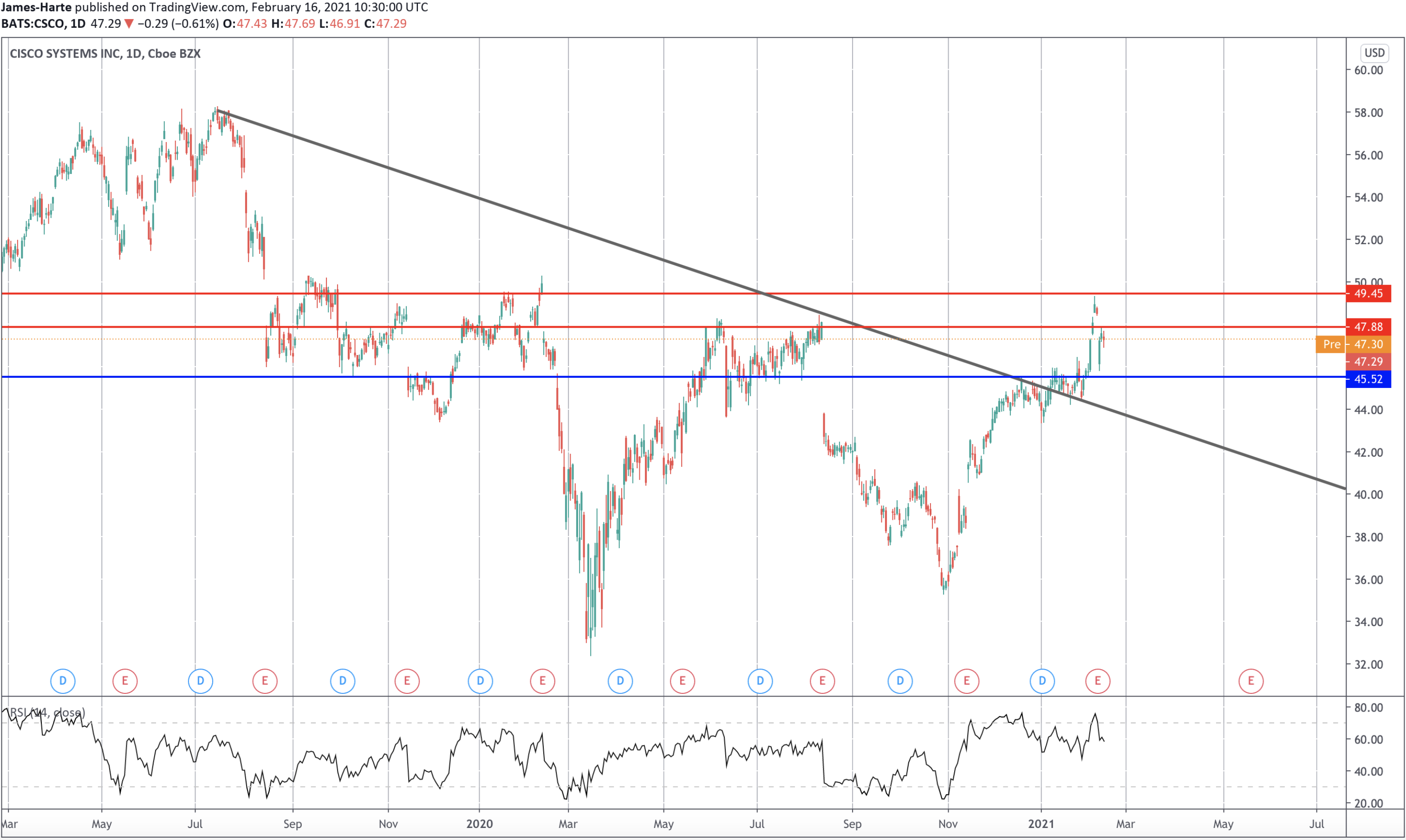 The rally in Cisco over Q4 saw price trading up to test the 49.45 level, which has held as support for now. Price has subsequently broken back below the 47.88 level. While below here, a further move lower cannot be ruled out.

However, while price holds above the broken trend line and support at the 45.52 level, the bias is still in favour of continued upside.