This Gold Company Has a Silver Lining

Mexico-centered Magna Gold has one operating project and several exploration projects, one of which just reported high-grade silver assays.

Magna Gold Corp. (MGR:TSX.V; MGLQF:OTCQB) is a relatively new companyóit only began trading on the TSX Venture exchange in June 2019óbut has quickly moved to optimize and restart operations at the San Francisco Gold Mine in Sonora, Mexico, that it acquired in May 2020, and it has been acquiring additional projects.

Magna Gold’s CEO Arturo Bonillas is no stranger to the company’s flagship San Francisco Mine. He co-founded Timmins Gold Corp., which acquired the project in 2005 from Geomaque, then drilled it, produced a feasibility study, built the processing facilityówhich originally had a 10,000 tonne per day (tpd) capacity that was expanded to 20,000 tpdóand operated the mine.


Bonillas left Timmins Gold in 2017, and the San Francisco Mine ran into operational challenges. “We have the same team we had back in Timmins days who were responsible for the mine’s initial success,” Bonillas told Streetwise Reports. “This is a very particular ore body. It doesn’t have a meaty metallurgy. However, we have resolved the issues and the mine is very profitable, reaching heap-leach recoveries of over 70%, which is not common. The most important thing is the human capital, people are back being creative.”

“Our primary strength is in our team of highly experienced mining professionals. We have a proven track record of developing properties in Mexico from discovery to production on budget and on time,” Bonillas added.

The San Francisco Mine has a Measured and Indicated resource of 1.43 million ounces of gold, and plans further exploration on the 41,000 hectare property. The company expects to complete 30,000 meters of drilling by March 2021 and has stated that it aims to increase the mineral reserves by at least 200,000 ounces of gold with that drilling. 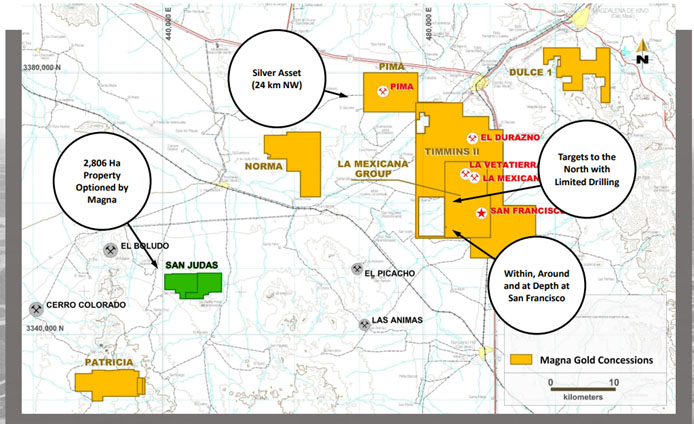 “Magna’s goal is to unlock the inherent value of San Francisco through an aggressive yet disciplined program of drilling and mine optimization that will establish a mine generating cash flow that can be re-invested into the property to support future growth,” the company stated. From May 6 through October 31, 2020, Magna has sold 14,810 ounces of gold from the San Francisco Mine, generating revenues of US$27 million.

The company has been exploring its other projects and just released results from its nine-hole, 1,719-meter, phase 1 drill program at La Pima silver project, also located in Sonora, just 24 km from the San Francisco Mine. “La Pima is an early-stage silver target with an excellent surface target of historical mine workings and outcrops,” the company stated. Drilling homed in on areas that geophysical surveys found promising.

“Magna is encouraged by these drill results and a second round of drilling is currently being planned to commence the first quarter of 2021,” Bonillas said. The company intends to drill 2,000 meters in a follow-up program designed “to test additional areas of alteration and to test the assays received at depth.”

In addition, the company is continuing to explore the Mercedes project located in Sierra Madre Occidental province. Drilling at the end of 2019 confirmed near-surface gold and silver mineralization along 300 meters of La Lamosa Ridge. “We are designing a small operation there, and we are finalizing a PEA [preliminary economic assessment] study to make a production decision there next year,” Bonillas said.

Another project, San Judas, is an early-stage exploration property in Sonora. Samples on the property have returned assays ranging from 0.5 g/t gold to 26.0 g/t, “outlining a broad areaó5 km by 2 kmóof structurally controlled gold mineralization. We have the potential here another San Francisco Mine type of deposit,” Bonillas noted. 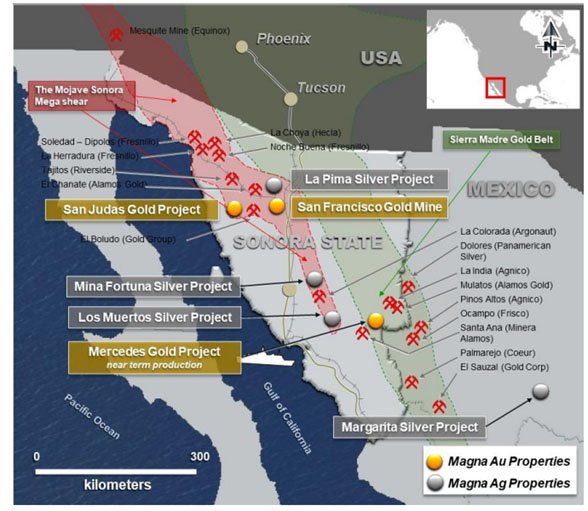 In November, Magna acquired the Margarita silver project in the state of Chihuahua. “The property features 7 km of outcropping veins, but only one vein has been drilled,” Bonillas noted. Channel sampling has returned assays from 100 g/t silver to 900 g/t silver. “We plan to initiate drilling shortly and put out a maiden resource estimate on the project,” Bonillas explained, “and then produce a preliminary economic assessment and prefeasibility study.”

With both gold and silver properties, the company is developing its strategy and has stated that it may consider forming a standalone silver company.