Peter Krauth explains why he believes gold will reach record highs next year.

Gold is winding up to set new all-time high record prices next year.

I know it may not feel that way for some right now, with gold correcting and consolidating since early August.

Still, the last four months have been productive. By now gold has worked off most of the excess bullish sentiment its market had built up. Gold’s huge 38% gain between March and August was exciting, but not entirely sustainable.


A correction from that point was likely, as most who’d wanted to buy had bought. Unfortunately, many did so in the last month or two of that rally. When gold retreated, those who saw some or all of their gains evaporate, and lacked conviction, became sellers.

But now most of that sentiment has rebalanced along with declining volumes. However, gold remains in its early days of a solid, multi-year bull market. The fundamentals are only becoming more supportive. And gold prices remain near all-time record highs in every existing currency.

The outlook could hardly be more bullish. And I expect we will see new record high nominal gold prices in every major currency next year.

Gold Highs Around the World

One of the hallmarks of a secular gold bull market is its performance in all currencies. When gold keeps establishing new highs, then it’s a key indicator of gold’s ongoing strength.

Here’s a look at gold’s performance in the world’s most commonly used currencies for perspective. 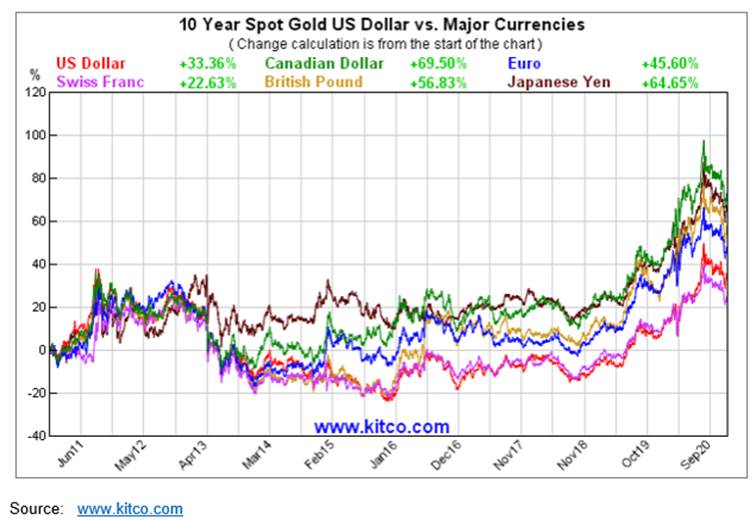 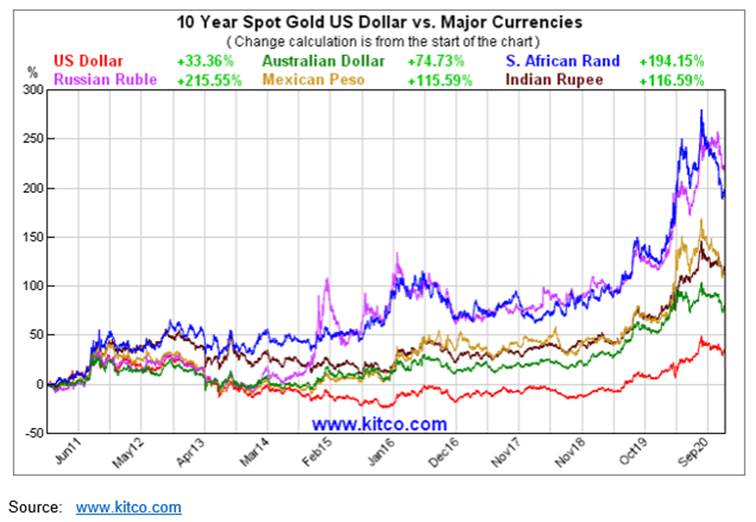 As you can see, over the past ten years, which includes gold’s peak in many currencies back in 2011, gold established a record high this year in every single one.

It’s true that it has retreated in recent months, but that’s just normal ebbing that comes after flowing. Expecting gold to rise in a straight line is simply unrealistic.

Like I’ve said many times, more stimulus is coming. Businesses are hurting, and unemployment remains stubbornly high. Fed Chair Powell’s comment in June that “ůwe’re not even thinking about thinking about raising ratesů” underscores that low rates are here to stay.

In fact, the trend towards negative real rates began in late 2018. 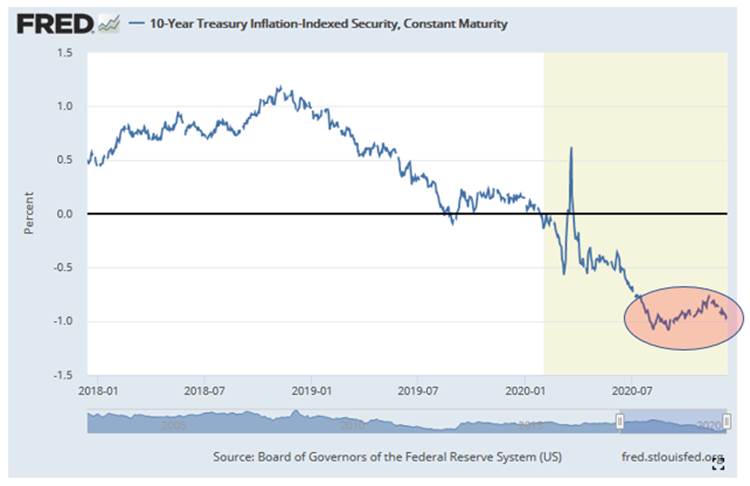 That’s when the Fed raised rates for the last time. The market was not happy, as evidenced by the S&amp;P 500 index’s volatility in 2018, and even ending that year with a loss.

Interestingly, the 10-year Treasury Inflation-Indexed Security initially bottomed on the very day gold peaked: August 6th. It began rising, and gold began falling. But then it peaked in early November. Within weeks, gold appears to have bottomed.

Rumblings about the Fed initiating yield curve control (YCC) to manage longer-term rates have grown louder. The last thing the Fed wants is longer rates to climb, which will discourage fund flows into equities. Sideways action in the S&amp;P 500 between early September and early November once again indicates the markets didn’t appreciate rising rates. Here again, stocks bottomed in early November and started to rise as the 10-year Treasury Inflation-Indexed Security topped.

So Where Is Gold Headed Next?

Let’s take a closer look at gold’s action over the recent past. 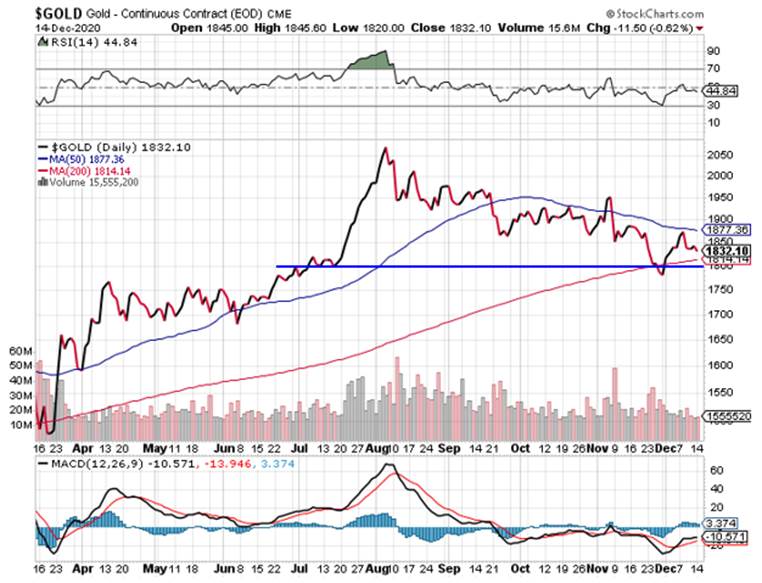 Despite testing its 200-day moving average in late November, gold’s held well above that level since. Both the RSI and MACD also bottomed at that point and have trended higher, reinforcing gold’s gains of the last month.

That doesn’t rule out a retest, however. We could still revisit gold’s late November low of $1,775. But with over 4 months of correction/consolidation behind us, odds are good that we’ve already seen most of the selling. There could be overhead resistance at $1,877, the 50-day moving average. But once that’s overcome, we could see a new rally begin in earnest.

December to February tends to bring some of the biggest gains for gold, starting with Christmas holiday buying, then topping out with Chinese New Year purchases in late February. Add in a late January presidential inauguration, combined with growing expectations for more stimulus, further supported by a few more challenging winter months of Covid-19 restrictions, and gold could well soar.

I expect gold will not only perform well in 2021, but establish a new all-time nominal high in U.S. dollars and all other currencies as well. In my view, gold is likely to reach US$2,300 at some point next year.

Gold is heading higher, and we gold bulls have the world’s major central banks and profligate governments to thank for that.

Now’s the time for gold. Buy the dips.