Legendary financier John Pierpont Morgan was — for all practical purposes — a one-man central bank before the Fed came into existence in 1913.

During the financial panic of 1907, the banking titan used his influence to provide bailouts for faltering financial institutions. And, back in 1895, he had actually loaned the federal government money during another crisis.

The creation of the Fed had J.P. Morgan at its heart and, since then, the relationship has been very cozy (witness the Fed gifting J.P. Morgan Bear Stearns for a tenth of its value in 2008).

All of what’s been said relates to this chart and commentary — also from the October Global Market Perspective: 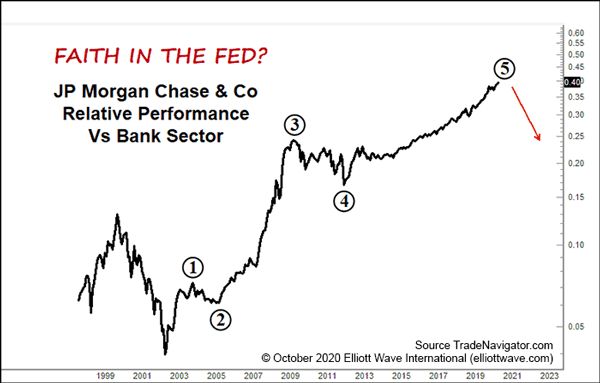 [The chart] shows the relative performance of J.P. Morgan to the U.S. banking sector. A very clear five-wave advance can be seen from 2002 with the fifth wave being shallower than the third, a classic loss of momentum as the impulse fades. This chart could be a proxy for the market’s faith in the Fed. If that is so, the Fed’s zenith is being crested right now.

Of course, the conventional wisdom has been that the Fed holds a lot of power over the economy and even the stock market.

The 2020 edition of Robert Prechter’s Conquer the Crash calls this the “potent directors” fallacy. Here’s a quote from the book:

It is nearly impossible to find a treatise on macroeconomics today that does not assert or assume that the Federal Reserve Board has learned to control the credit supply, interest rates, the rate of inflation and the economy. Many people believe that it also possesses immense power to manipulate the stock market.

The very idea that it can do these things is false. …

Real economic growth in the U.S. was greater in the nineteenth century without a central bank than it [had] been in the twentieth century with one.

The U.S. has experienced numerous financial crises in its history.

Here in the waning weeks of 2020, the evidence suggests that the next one may be one of the most severe. This financial earthquake will likely shake the entire globe.

Let’s return to the 2020 edition of Conquer the Crash:

The discrepancy between the value of total debt outstanding and the value of its real underlying collateral is huge. It is anyone’s guess how much of that gap ultimately will have to close to satisfy the credit markets in a deflationary depression. For our purposes, it is enough to say that the gap itself, and therefore the deflationary potential, has never been larger.

Now is the time to read Elliott Wave International’s special free report: “What You Need to Know Now About Protecting Yourself from Deflation.”

This article was syndicated by Elliott Wave International and was originally published under the headline Why the Market’s “Faith in the Fed” May Be Dwindling Fast. EWI is the world’s largest market forecasting firm. Its staff of full-time analysts led by Chartered Market Technician Robert Prechter provides 24-hour-a-day market analysis to institutional and private investors around the world.

Margin: How Stock Market Investors Are “Reaching for the Stars” Nov 24, 2020 - "This is the highest ratio in the 20-year history of the data." By Elliott Wave International - One of the historic ways that stock market investors exhibit conviction about the direction of prices is to use leverage or participate in…