How to Stay Ahead of Price Turns in the U.S. Long Bond

This method of analysis applies to any widely traded financial market

Back in August, the volatility index for Treasury debt was at an all-time low, indicating record commitment to the idea the markets would continue to calmly rise.

Bond Investors Are Getting Fresh Reasons to Stay Record Bullish

Bloomberg mentioned U.S.-China tensions as a reason that investors would seek a safe haven in bonds, hence, pushing prices higher.

Then, a week later (Aug. 3), Reuters quoted the co-head of global bonds for an asset management group:


“I think the downward pressure on yields will continue for the foreseeable future.”

Of course, as you probably know, a “downward pressure on yields” correlates with higher bond prices. Yields and prices move inversely to each other.

But, it’s best to look beyond “fundamentals,” such as the chilly relationship between the U.S. and China, and focus on the price pattern of bonds. 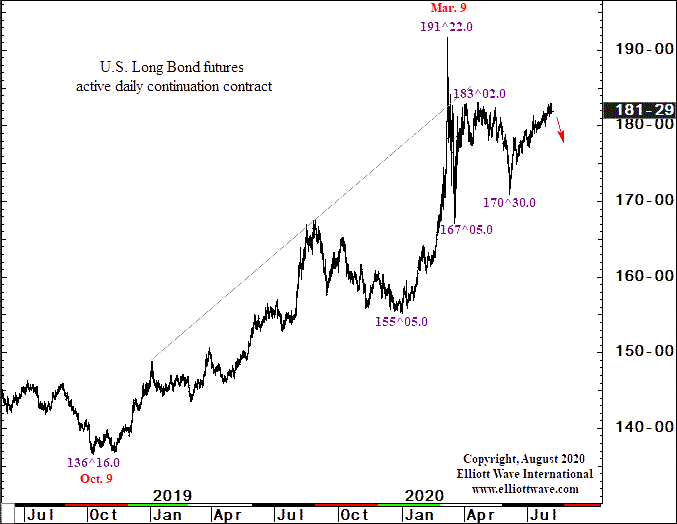 Last night, [U.S. Treasury long bond futures] met the wave … high from April 21, with a rally to 183^00.0. Prices could modestly exceed this high, but the pattern does not require it.

In other words, the wave pattern suggested that the next move would be down, as indicated by the red arrow at the end of the price line.

Well, the long-bond high was reached the very next day (Aug. 6), and prices have been trending downward since. 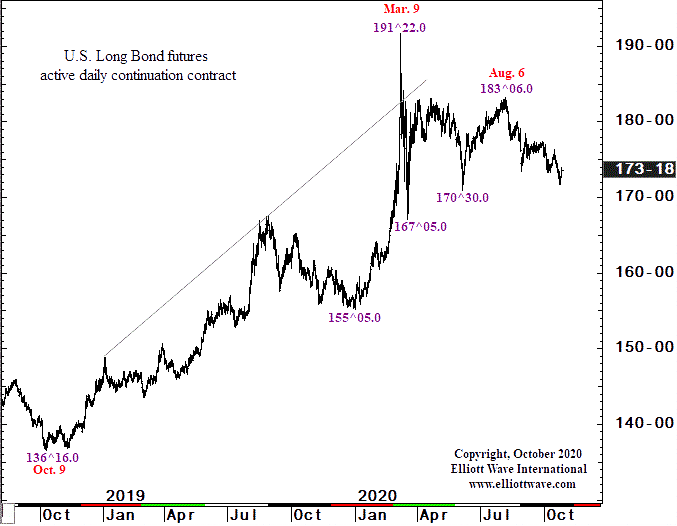 You can see that high notated on the chart and the subsequent slide. Since that slide began, prices have tumbled by about 5.5% (as of Oct. 26) — and yields, they’ve been rising.

So, the way that investors can stay ahead of turns in the bond market is by using the Elliott wave model. This method works with any widely traded financial market.

Would you like to learn more about the Wave Principle?

If your answer is “yes,” then you may be interested in knowing that the online version of Elliott Wave Principle: Key to Market Behavioris available to you free when you become a member of Club EWI, the world’s largest Elliott wave educational community. Membership is free — and you’ll gain instant access to a wealth of valuable resources on investing and trading from an Elliott wave perspective once you join. Club EWI has about 350,000 members.

This article was syndicated by Elliott Wave International and was originally published under the headline How to Stay Ahead of Price Turns in the U.S. Long Bond. EWI is the world’s largest market forecasting firm. Its staff of full-time analysts led by Chartered Market Technician Robert Prechter provides 24-hour-a-day market analysis to institutional and private investors around the world.

What’s REALLY behind Musk’s Bitcoin u-turn? May 13, 2021 - By George Prior - Elon Musk’s sudden u-turn regarding Bitcoin on Twitter - which sent prices plummeting by 15% - could be more of a PR stunt than anything else, says the CEO of one of the world’s largest independent…
The Colonial Pipeline ransomware attack and the SolarWinds hack were all but inevitable – why national cyber defense is a ‘wicked’ problem May 13, 2021 - By Terry Thompson, Johns Hopkins University  Takeaways: · There are no easy solutions to shoring up U.S. national cyber defenses. · Software supply chains and private sector infrastructure companies are vulnerable to hackers. · Many U.S. companies outsource software development…

Putting a dollar value on nature will give governments and businesses more reasons to protect it May 12, 2021 - By Linda J. Bilmes, Harvard Kennedy School  President Joe Biden calls climate change “the existential crisis of our time” and has taken steps to curb it that match those words. They include returning the U.S. to the Paris Agreement; creating…