Oil prices are starting the new week by trimming more of their November gains, amid reports that OPEC+ members are struggling to agree whether or not to delay its planned supply hike in January. The group of major Oil producers held informal talks over the weekend, with no positive breakthrough.

Later today, OPEC+ is set to commence two days of closed-door virtual meetings. The key decision is due by tomorrow. 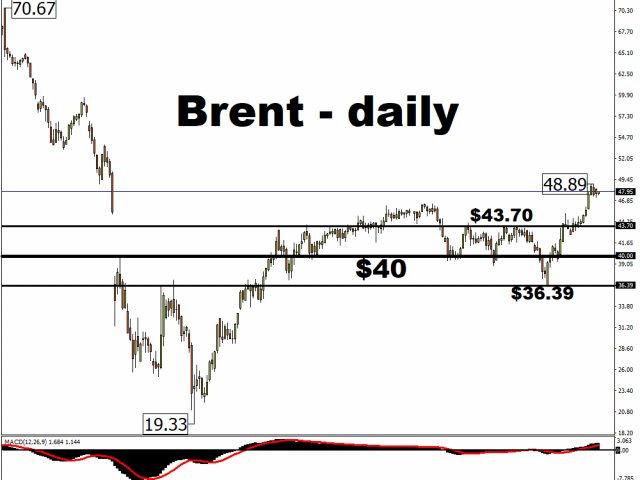 Brent Oil is pulling further below the psychologically-important $50/bbl mark, but are still trading near their highest levels since March. At the time of writing, Brent futures have a month-to-date gain of over 25 percent. Its trough-to-peak climb is even more impressive, registering an advance of over 34 percent.


From a technical perspective, Oil prices needed to cool off after the rapid ascension for much of this month, with its 14-day relative strength index (RSI) hitting the 70 mark, which indicates overbought levels. 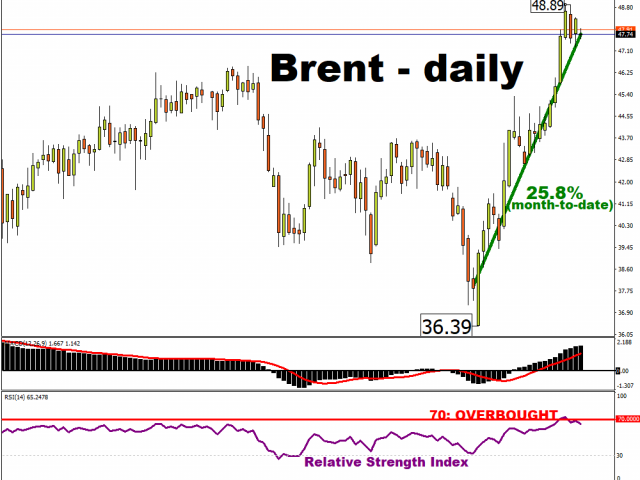 Oil prices had been powered up by the rosier global economic outlook given expectations that a Covid-19 vaccine was closer to being rolled out. Markets had also been expecting OPEC+ to push back its schedule for easing back on its supply cuts programme. Constrained supply, coupled with rising demand levels, equated to upward pressure on prices.

Under the current agreement, this group of major Oil producers are set to bring back 1.9 million barrels of oil per day (bdp) into global markets beginning January. Investors are hoping that such plans would be pushed back until March, or risk pushing global markets back into oversupplied conditions, according to OPEC’s own experts. Keep in mind that this OPEC+ group of 23 major Oil producers accounts for more than half of the world’s supply.

OPEC+ members have a history of airing their grievances before finally being coalesced into a formal, concerted decision at their meetings. However, this should not be taken as a done deal. We need not be reminded of the risk of a spectacular fallout within OPEC+, as was the case back in April when a full-on price war broke out between Russia and Saudi Arabia.

Failure to reach a consensus could see Oil prices rapidly unravelling back towards the $40/bbl mark once more. However, if OPEC+ can secure an agreement to keep global Oil supplies lower for longer, at least through March, that could allow more time for global demand to stage a stronger recovery, while sending Brent Oil on to reclaim the $50/bbl handle for the first time since the pandemic broke out.

Energy Financial News
← Disagreements between the UK and EU persist
DAX30 bulls push the German index in a favorable position for a year-end rally →
Featured Articles: