That usually heralds a sales extravaganza for shoppers around the world, and a potential windfall for e-commerce giant Alibaba.

On November 11th 2019, Alibaba’s platforms racked up US$38 billion worth of sales, which is more than Facebook’s total revenue from the first half of 2020. That tally is set to be well-beaten at this year’s Singles Day event, with consumers set to unleash pent-up demand due to months spent at home under the pandemic-induced lockdown.

However, the excitement surrounding Alibaba’s offerings in the online marketplace haven’t translated over to its shares. Since posting a new record high on October 27th, Alibaba’s shares in New York have fallen by almost 16 percent to drop below its 100-day simple moving average (SMA) and test a key support level at the $266.30 level at Tuesday’s close. 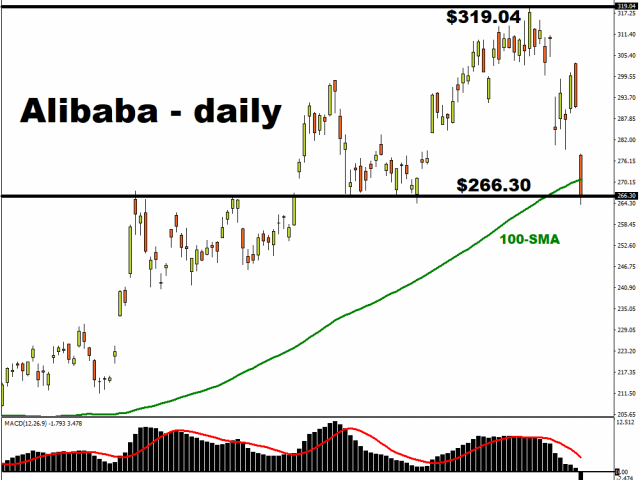 At the time of writing, Alibaba’s shares in Hong Kong are sinking by about 8.8 percent on Wednesday even as the Singles Day sales rage on, with today’s price action dragging it down to now more than 18 percent below its October 28th record high. Meanwhile the broader Hang Seng index edges higher with its 100-day SMA crossing above its 200-day counterpart. 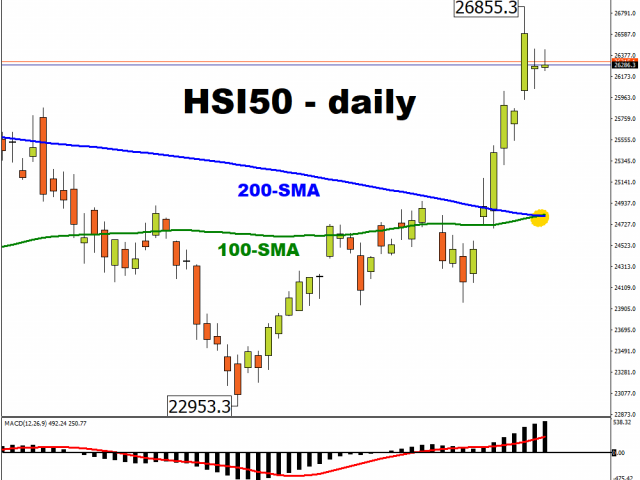 The Singles Day sales this year would also take on additional significance, as it would be used as a barometer to further assess Chinese consumers’ willingness and ability to spend. China’s official retail sales data returned to year-on-year growth in August and September, and that momentum is expected to carry through into the Singles Day bonanza.

And just as Alibaba is domestically-focused, with about 93 percent of its total sales being generated from within China’s borders, so too is the world’s second largest economy having to become more reliant on internal drivers of growth, given that major Western economies are far from winning the battle against Covid-19. Domestic demand has taken on a more crucial role in further enabling China’s ability to lead the world into the post-pandemic era. China’s Q3 GDP expanded by 4.9 percent, in stark contrast to much of the rest of the world that is still contending with negative economic growth.

China’s remarkable economic recovery is also not lost on global brands that are looking to make up for sales lost to the pandemic. Household names such as Nike, Estee Lauder, and Apple are among those vying for a piece of China’s 400-million strong middle class, while another 2600 new foreign brands have jumped on the bandwagon this year.

From the company’s perspective, Alibaba is in real need of a boost, after having reported its slowest revenue growth on record for the Q3 period. Even at a 30 percent year-on-year increase, which would be astounding for most other companies, it wasn’t enough to stop chatter among investors that Alibaba’s e-commerce growth has plateaued. This may force the company to look for other drivers of top-line growth, including its cloud computing division, which posted a 60 percent growth in revenue and is forecasted to turn profitable by March 2021. Still this division is set to face tremendous challenges from other tech behemoths such as Amazon, Microsoft, Google, and even Tencent.

Still there are broader concerns that are exerting downward pressures on Alibaba’s shares. From the markets’ rotation away from tech megacaps, to increased regulatory concerns, to slowing growth prospects, Alibaba’s would need to find some measure of comfort, from somewhere, and fast. Otherwise, the company’s valuation risks unwinding more of its remaining 50 percent of gains since its March trough, with a big chunk having already been wiped out over the past fortnight.

Perhaps, once the dust settles, that’s where the real bargain lies: in beaten-down Alibaba stocks.

Cryptos: What the “Bizarre” World of Non-Fungible Tokens May Be Signaling Jun 18, 2021 - By Elliott Wave International The world of cryptos includes something known as non-fungible tokens, which go by the acronym NFTs. If you're unfamiliar with them, they're a bit bizarre but quite simple. Here's what the April Global Market Perspective, a…

Wall Street Smart Money Is Accumulating Physical Silver Ahead Of New Basel III Regulations And Price Explosion To $44 An Ounce Jun 18, 2021 - By TheTechnicalTraders  - Recently, Gold and Silver have somewhat stalled after a fairly solid upside price trend in April and May 2021.  Looking at the longer-term Weekly Silver chart, we believe Silver is ready to pounce with a big move…