A Global “Debt Mountain”: Beware of This “New Peak”

Most people going about their daily business probably never give a moment’s thought to global debt.

But, in EWI’s view, the topic deserves serious attention.

You only have to think back to the 2007-2009 subprime mortgage meltdown to know why. Of course, subprime mortgages are a form of debt, and when many of these loans turned sour, the entire global financial system teetered on the brink of collapse.

In the years following the 2007-2009 global financial crisis, that confidence has returned in spades.


A global “debt mountain” has hit a new peak.

Here’s a chart and commentary from our just-published November Global Market Perspective: 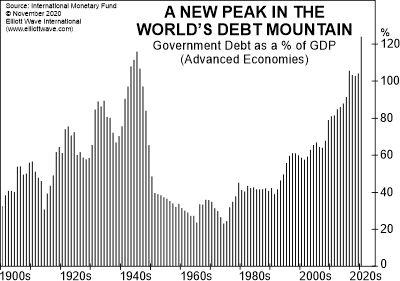 Whether or not countries can service their debt will be the defining economic question of the coming decade. … For now, mood remains positive, so the world remains awash in IOUs and governments still retain the ability to add more. … Across the world, advanced economies have seen their collective debt-to-GDP ratios push past levels last seen at the end of World War II. The situation is building to an epic finale. …

The ability of the financial system to sustain increasing levels of credit rests upon a vibrant economy. At some point, a rising debt level requires so much energy to sustain — in terms of meeting interest payments, monitoring credit ratings, chasing delinquent borrowers and writing off bad loans — that it slows overall economic performance. A high-debt situation becomes unsustainable when the rate of economic growth falls beneath the prevailing rate of interest on money owed and creditors refuse to underwrite the interest payments with more credit.

Getting back to the 2007-2009 financial crisis, that alarming episode may have only been a preview of what’s next.

It does appear that an “epic” deflation is likely.

Deflation involves a substantial amount of bad debts because almost no one expects deflation before it starts. Surprise is a prerequisite of deflation.

However, you and your family can be prepared.

You can have Elliott Wave International’s special free report on your computer screen in moments by following this link: “What You Need to Know Now About Protecting Yourself from Deflation.”

This article was syndicated by Elliott Wave International and was originally published under the headline A Global “Debt Mountain”: Beware of This “New Peak”. EWI is the world’s largest market forecasting firm. Its staff of full-time analysts led by Chartered Market Technician Robert Prechter provides 24-hour-a-day market analysis to institutional and private investors around the world.