Technical analyst Clive Maund charts silver and explains why he believes it is one of the best investments for these times.

With hyperinflation looming, silver has to be one of the best investments of these times, especially as it leverages gold’s gains. This summer saw a spectacular high volume breakout from the giant base pattern that had been forming for years, as we can see on its latest 13-year chart, which is hardly surprising considering the Fed’s white hot money creation. The breakout triggered a sharp run up that resulted in silver becoming heavily overbought in a zone of quite strong resistance, hence the reaction since early August, which is setting it up for the next big run. 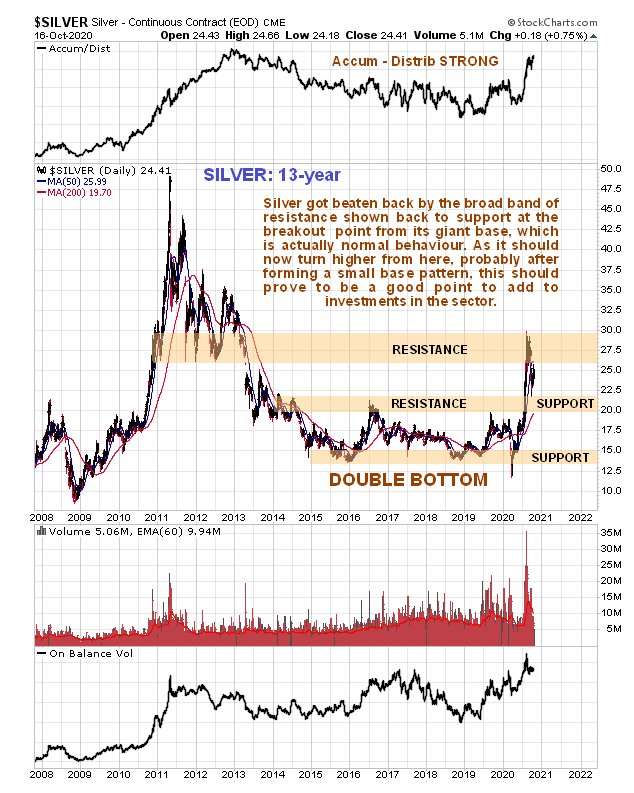 As we can see on the 15-month chart, the strong resistance at the upper boundary of the giant base pattern has now become strong support, which should now strictly limit downside. Last month silver briefly tested this support, bouncing off it and it is thought likely that it will retest it again over the short-term before the next major upleg starts, with similar action being expected in gold. This would be normal following the breakdown from the triangular pattern and below the 50-day moving average which has opened up quite a large gap with the 200-day. Basically silver is backing and filling here ahead of its next major upleg, and in so doing it is providing investors with an opportunity to build positions further on any near-term weakness. 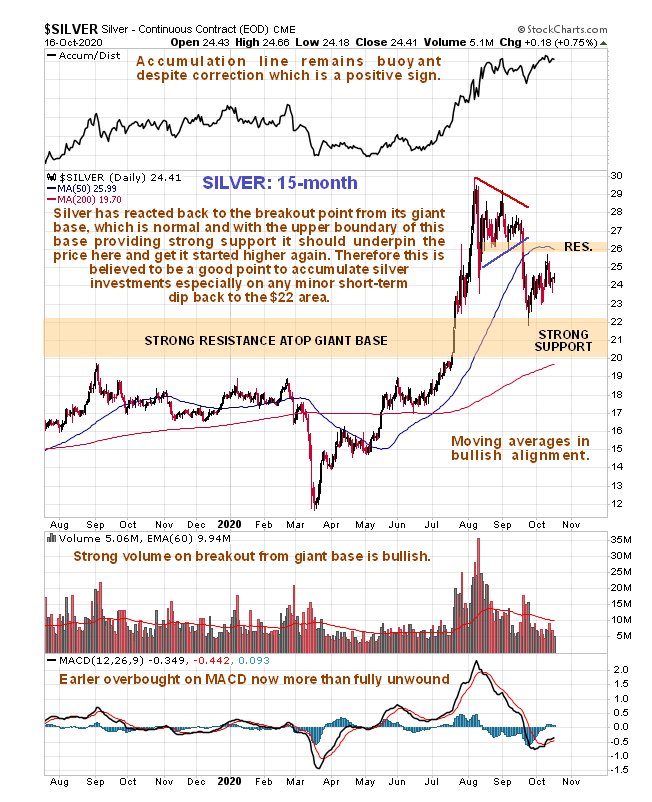 The rather sharp breakdown from the Triangle in mid-September caused some damage to sentiment and on the 6-month chart we can see that a pattern has since formed that looks like a bear Flag. If this interpretation is correct, then we can expect it to break lower again near-term, but due to the proximity of strong support, it is unlikely to drop by much—probably to somewhere between the bottom of the band of support shown and the rising 200-day moving average. This is a rather tough call because other factors are very bullish, including the strong Accumulation line which made new highs about a week ago and the bullish alignment of moving averages. What all this suggests is that we will have one last modest drop to complete this corrective phase before silver takes off strongly higher again in a second major upleg, and this fits with the scenarios set out for gold and the dollar in the parallel Gold Market update. In any event, downside here is viewed as limited and with hyperinflation looming as mentioned at the outset, any short-term dips will be viewed as presenting outstanding opportunities to build positions across the sector ahead of the new major upleg. 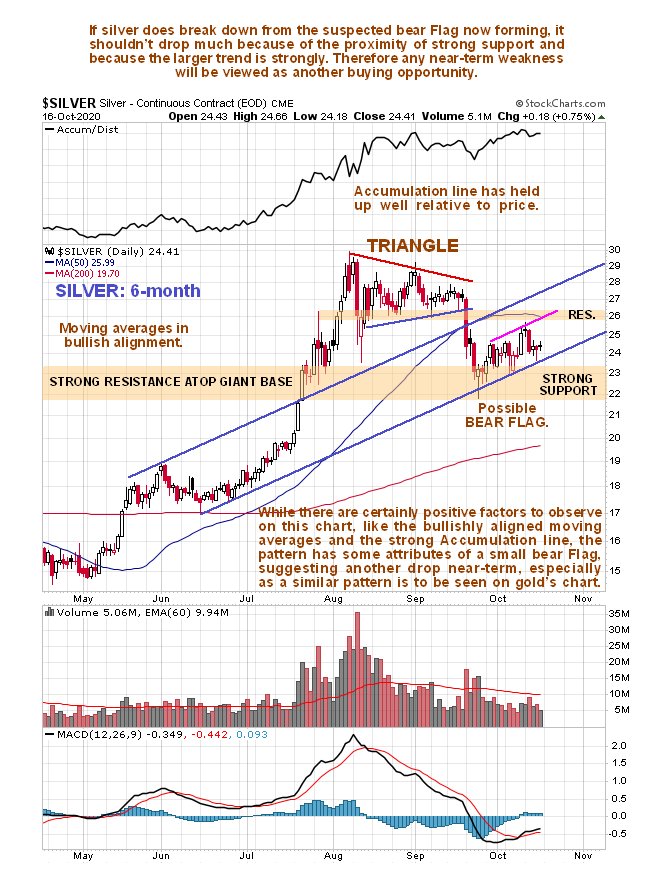 As with gold, COT positions are in middling ground and don’t provide much guidance one way or the other, which is why we are not bothering to look at silver’s COT chart in this update.


Originally published on CliveMaund.com on October 18, 2020.

Disclosure:
1) Statements and opinions expressed are the opinions of Clive Maund and not of Streetwise Reports or its officers. Clive Maund is wholly responsible for the validity of the statements. Streetwise Reports was not involved in any aspect of the article preparation. Clive Maund was not paid by Streetwise Reports LLC for this article. Streetwise Reports was not paid by the author to publish or syndicate this article.
2) This article does not constitute investment advice. Each reader is encouraged to consult with his or her individual financial professional and any action a reader takes as a result of information presented here is his or her own responsibility. By opening this page, each reader accepts and agrees to Streetwise Reports’ terms of use and full legal disclaimer. This article is not a solicitation for investment. Streetwise Reports does not render general or specific investment advice and the information on Streetwise Reports should not be considered a recommendation to buy or sell any security. Streetwise Reports does not endorse or recommend the business, products, services or securities of any company mentioned on Streetwise Reports.
3) From time to time, Streetwise Reports LLC and its directors, officers, employees or members of their families, as well as persons interviewed for articles and interviews on the site, may have a long or short position in securities mentioned. Directors, officers, employees or members of their immediate families are prohibited from making purchases and/or sales of those securities in the open market or otherwise from the time of the decision to publish an article until three business days after the publication of the article. The foregoing prohibition does not apply to articles that in substance only restate previously published company releases.

Metals Opinions
← Global Banking: Some Sectors Look as “Precarious as Ever”
The Analytical Overview of the Main Currency Pairs on 2020.10.26 →
Featured Articles: