The reasoning behind that belief is that bonds compete with stocks for investment funds. Hence, the higher the yield investors can get from bonds, the less attractive stocks become and vice-versa.

This assumption sounds logical, but in reality, stock market investors do not take their cue from rising or falling yields (or interest rates).

Yes, there have been times in financial history when rising rates have coincided with falling stock prices and vice versa. Yet, there have also been periods when stocks have risen as rates have risen, and times when lower rates have coincided with falling stock prices. A notable example of the latter in the U.S. occurred during the Great Depression of the late 1920s and early 1930s. The DJIA plummeted 89% from August 1929 to July 1932 as interest rates trended lower. Also, interest rates trended lower as the NASDAQ fell 78% from March 2000 to October 2002 and as the DJIA tumbled 54% from October 2007 into March 2009.

Even so, a September 2020 Financial Times column said:


Equity Investors Should Raise a Glass to Low Rates
This year, equity investors have been shouting “three cheers” for central banks.

Yet, the just-published October Global Market Perspective, an Elliott Wave International monthly publication which offers analysis of 40-plus worldwide markets, showed these two charts and said: 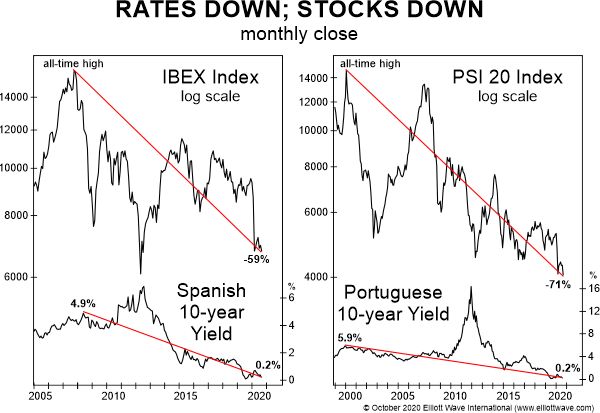 These two charts illustrate the fallacious, yet pervasive belief that falling interest rates are a big boost for stocks. Ten-year interest rates in Spain have dropped from 4% in 2007 to nearly 0% today. Yet the broad market IBEX plummeted almost 60% over the same span. In Portugal, 10-year rates were approaching 6% when the PSI 20 peaked at its 2000 all-time high. Rates surged to about 16% during the 2012 sovereign debt crisis and then crashed to 0.24%. Despite an overall decline in borrowing costs, the PSI-20 is lower today than it was in 2012, and shares are down an astounding 71% over the past 21 years.

Indeed, a review of financial history shows no reliable relationship between stock trends and any external factor.

It is a thrilling experience to pinpoint a turn, and the Wave Principle is the only approach that can occasionally provide the opportunity to do so.

The ability to identify such junctures is remarkable enough, but the Wave Principle is the only method of analysis that also provides guidelines for forecasting. Many of these [Elliott wave] guidelines are specific and can occasionally yield stunningly precise results.

Isn’t that what every investor wants?

Delve into the online version of the Wall Street classic, Elliott Wave Principle: Key to Market Behavior, so you can learn the Elliott wave guidelines and gain other insights into the Elliott Wave Principle. You can do so 100% free when you become a member of Club EWI, the world’s largest Elliott wave educational community (around 350,000 members and growing). Club EWI membership is free and allows you free access to an abundance of Elliott wave resources on financial markets, investing and trading.

This article was syndicated by Elliott Wave International and was originally published under the headline “Rates Down, Stocks Up”? Myth … Busted!. EWI is the world’s largest market forecasting firm. Its staff of full-time analysts led by Chartered Market Technician Robert Prechter provides 24-hour-a-day market analysis to institutional and private investors around the world.