Before US markets open on Tuesday, JPMorgan Chase & Co. will do us the honours once more of being the opening act for this latest US earnings season. Already, the options markets are pointing to a one-day move of 3.14 percent, either way, following their Q3 earnings release. If such a price swing were to transpire, that would be larger than the average 1.9 percent absolute move for the past eight reports!

JPMorgan’s performance will also be closely scrutinised because it may give investors an idea about where the world’s largest economy is headed. As the US economic recovery shows signs of plateauing, so too have the share prices of its biggest lender, with JPMorgan stocks largely sticking to a sideways range so far in the second half of this year. 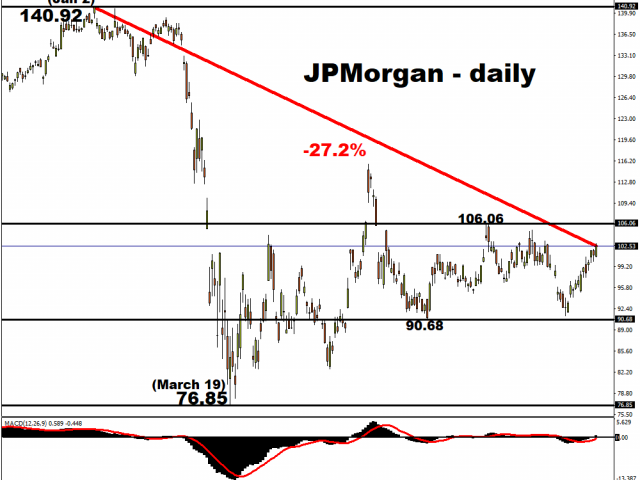 
Saving for a rainy day?

During JPMorgan’s announcement, investors will be eyeing tell-tale signs surrounding its credit quality.

Recall that, in Q2, JPMorgan had already set aside US$10.5 billion for loan loss provisions, which is how much money the bank is setting aside in anticipation of customers not being able to service their loans in the future.

Q3 was a time when stimulus checks made their way into American households, as the broader economy enjoyed unprecedented amounts of monetary and fiscal stimulus. The US unemployment rate saw a significant decline during the past three months, coming in at 7.9 percent in September, which is significantly lower than the 14.7 percent registered in April.

Yet, considering the dire economic outlook, the fiscal taps have dried up, with the next round of fiscal stimulus left in limbo by political brinksmanship between the White House and Democrats.

With all that considered, should JPMorgan see it fit to add more loan loss provisions, that could signal that they’re bracing for more defaults in the future, which could then send a risk-off signal to broader markets.

The road to earnings recovery

Overall, market participants would want to know whether the major US banks that will be announcing their results this week can set the tone for the expected earnings recovery over the coming quarters.

Recall that in Q2, S&P 500 companies saw an earnings drop of over 30 percent. It was ugly, from a fundamental perspective, yet traders pushed the benchmark stock index upwards with apparently nary a care in the world.

Q3 estimates call for a 21.7 percent drop in earnings, followed by a 13.7 percent decline in Q4, which could then put Wall Street back on the path to earnings growth in 2021. However, should the Q3 earnings disappoint, that could set back such projections, prompting fundamentally-driven investors into giving S&P 500 companies a longer runway to stage their earnings comeback.

Of course, JPMorgan’s economic outlook and forward guidance could well set the tone for equity markets during this earnings season. However, it remains to be seen how much market participants will sway to the reporting season’s tune, or would they keep faith that the next round of US fiscal stimulus is imminent while blissfully ignoring any warning signs out of Wall Street.