Gold: Why You Should Be Wary of the “Consensus”

You may recall investor optimism that attended gold’s then record high of $1921.50 in September 2011.

Perhaps the strongest sign of a gold top is a recent Gallup poll showing Americans now consider gold to be the best long-term investment. Gallup parsed the survey by gender, age, income level and political affiliation and in every single subset, gold won out. … Everyone is onboard gold’s uptrend. It is surely a sign of exhaustion.

Indeed, less than a week later, gold hit its then record high. 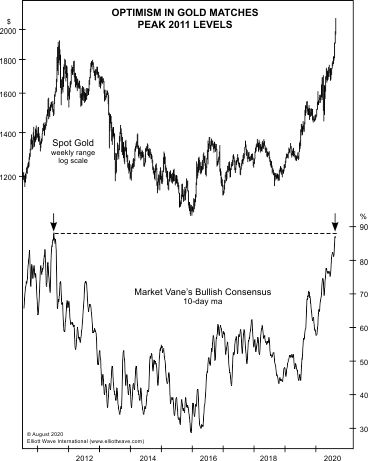 [The figure] shows a 10-day moving average of Market Vane’s Bullish Consensus toward gold. This indicator tracks the daily buy/sell recommendations of market analysts and commodity trading advisors. As you can see, the consensus is strongly bullish.

This strongly bullish was expressed less than two weeks later in this Yahoo! News headline (August 25):

Why $5000 Gold Could Soon Become A Reality

That’s possible — yet, if you’ve been keeping up with gold’s price, you know that it’s more than 4% lower (as of Sept. 25) than it was when the August 14 Elliott Wave Theorist discussed Market Vane’s Bullish Consensus.

Should investors expect the “bottom to drop out” from here on out, or is there still more upside to go for gold?

Well, besides sentiment measures, it’s also a good idea to keep an eye on the Elliott wave structure of gold’s price chart.

Would you like to learn more about the Wave Principle?

Well, Elliott Wave International is making the online version of Elliott Wave Principle: Key to Market Behavior available to you free when you join Club EWI, the world’s largest Elliott wave educational community. Don’t worry — Club EWI membership is also free and there are no obligations when you join.

Besides free access to the book, members are also granted free access to a wealth of Elliott wave resources on financial markets, investing and trading.

This article was syndicated by Elliott Wave International and was originally published under the headline Gold: Why You Should Be Wary of the “Consensus”. EWI is the world’s largest market forecasting firm. Its staff of full-time analysts led by Chartered Market Technician Robert Prechter provides 24-hour-a-day market analysis to institutional and private investors around the world.