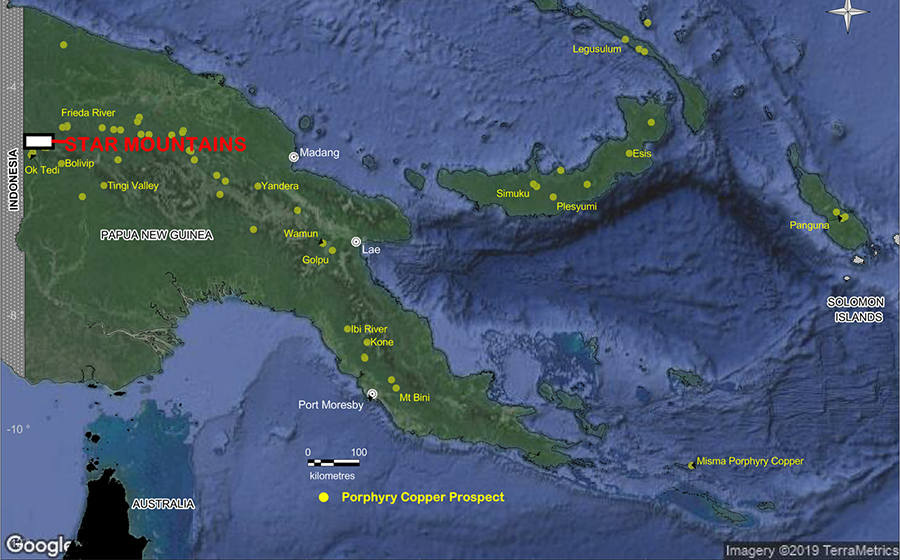 Papua New Guinea, located along the Pacific Rim of Fire, features a number of large gold-copper mines, including the massive Ok Tedi copper, gold and silver mine and the Porgera gold mine. Across the border, on the Indonesian side of the island, sits Freeport McMoRan’s colossal Grasberg gold-copper mine, the largest gold mine and second largest copper mine in the world.

Located in the PNG Orogenic Belt, not far from the Indonesian border and only 25 km from Ok Tedi, lies the Star Mountains copper-gold project. Freeport Resources Inc. (FRI:TSX.V) recently received TSX approval to close its acquisition of Quidum Resources and, once this transaction is closed, Freeport will control the Star Mountains project through its wholly owned subsidiary, Highlands Pacific Resources Ltd. The transaction is subject to approval from the Mineral Resources Authority in Papua New Guinea, which the company expects to receive in the coming weeks.

The project has seen more than US$60 million in exploration work since its discovery in 1971, with half of that conducted in the past half-dozen or so years.

“Highland Pacific did a partial farm-out joint venture with Anglo American Plc, which came in and spent something like $35 or $40 million of the $60 million. But then Anglo departed Papua New Guinea due to a change in corporate priorities at the time,” Freeport Resources noted. “Extensive drilling, field work, geophysics, and aeromagnetic and radiometric surveys have provided deep knowledge of the regional geological setting.”

To date, 51 holes have been drilled on the property, for a total of 21,415 meters, and of the seven prospects tested, mineralization was identified at five.

Freeport’s management likes the fact that the project is roughly equal copper and gold, giving it upside exposure to both metals.

To expedite further project work, the company will engage the existing Highlands Pacific technical and administrative team that has been with the project from day one, allowing them to maintain project continuity and momentum. As part of the same strategy, the company will keep the same base camp and onsite staff that have been associated with this project in Papua New Guinea for the last 15 years.

The company notes that it plans to conduct extension drilling on the property on known targets to further expand its already large gold and copper resource base. In parallel to ongoing exploration, the company believes that “the project’s substantial copper-gold resource base will attract the attention of large mining companies and intends to pursue discussions about a possible strategic joint venture or sale.”

In addition to Star Mountains, Freeport holds several properties in Canada, including the Red Rose mine, a past-producing tungsten-gold-silver-copper project in the prolific Rocher Deboule mining camp; the Spanish Mountain Gold property; the Q Claims, a major fluorite deposit; and the Hutton Garnet Sands project in northern Labrador that consists of beach sand deposits.

Once the Star Mountains transaction has closed, Freeport will have approximately 69 million shares outstanding and 117 million outstanding on a fully diluted basis.