Another Nasdaq pullback in the works?

Despite Tuesday’s dip of just 0.04 percent, the Nasdaq 100’s 14-day relative strength index (RSI) is edging closer towards overbought territory once more. And as seen over recent months, when the RSI breaches that 70 line, it usually triggers a decline of over six percent, as was the case in June and July. Then there was September’s selloff, when the Nasdaq 100 dramatically fell by 14.4 percent in about a three-week period beginning September 2, as the index entered a technical correction. 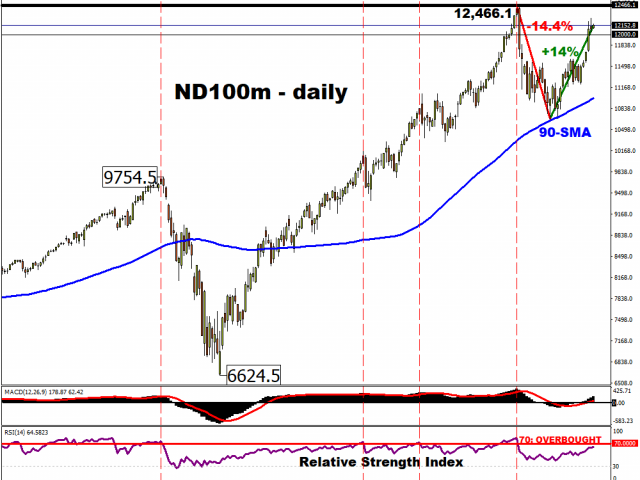 Yet, it’s evident that the Nasdaq has the ability to quickly dust itself off after such a dramatic fall and just pick up from where it left off. Recall that, after entering a bear market in March, the Nasdaq 100 went on to post multiple fresh record highs. After September’s correction, the tech-heavy index is now just 2.6 percent away from its record high, having climbed by almost 14 percent since September 21. At the time of writing, Nasdaq 100 futures are pointing to further gains when US markets open on Wednesday.

A major factor has been the exuberance shown among investors towards such household names such as Amazon, Facebook, and Apple, whose business models seem apt for this pandemic era. With social distancing, lockdowns, and work-from home becoming the norm, societies have little choice but to become more reliant on Big Tech.

Market observers have also pointed to the options market, specifically call options, which is an instrument that gives the buyer the right to buy an asset at a specified price at a specified time in the future. While retail investors perhaps may not be buying these stocks outright, given the hefty price tags for the likes of Amazon and Alphabet, there are signs pointing to the purchasing of call options, which is a cheaper way to benefit from the rise in US tech stocks than buying these stocks outright. When so many call options are being snapped up, it forces the brokers and market makers to then purchase the underlying stock in order to cover their positions. This phenomenon then lends itself towards a self-fulfilling loop (traders buy call options, market makers buy underlying stock, repeat), which ends up driving the prices northward.

Such a strategy isn’t just a darling among the hordes of retail traders, but even major funds such as Masayoshi Son’s Softbank.

Can anything stop Big Tech’s ascension?

And the amazing climb in US tech stocks is all the more remarkable, given that House Democrats just last week labelled the likes of Amazon, Facebook, Google, and Apple as “monopolies”, and are threatening to break up Big Tech. Then there’s the looming US elections risk, which is a mere three weeks away.

Looks like US tech aficionados are viewing such major risks as mere speed bumps in their quest to showcase their penchant for pushing Big Tech onto loftier valuation. And judging by the 14-day RSI, looks like we could see another pullback before the November 3rd elections, even as the Nasdaq 100 attempts its latest ‘V’ shaped recovery.