In the U.S., they refer to a core set of data points, including the Consumer Price Index, the Producer Price Index, employment, manufacturing activity, housing starts and consumer confidence.

But, interestingly, the most important economic indicator is usually not referred to as such, and it’s none other than the stock market itself.

This is not a new idea to Elliott wave fans and those familiar with the new science of social prediction called “socionomics.” The logic behind this idea is sound: When people are optimistic about the future, many of them buy stocks and can do so almost immediately. But that same optimism takes time to play out in the economy. It might take months to draw up plans to expand a business, hire new employees and so forth. The same applies in reverse when people turn pessimistic about the future. It takes time for business owners to cut back. So that’s why the economy lags the stock market. Examples abound: Just think back to the 2009 bottom in stocks, or the bottom in March of this year — both occurred despite the worst economy in decades, and the economy followed; it didn’t lead.


However, as suggested, even seasoned financial observers are puzzled when the stock market does not behave in a way that matches the latest economic news.

For example, consider this August 15 news item from the UK Guardian:

Surge in shares contrasts with Covid-related downturn and growing unemployment

Elliott Wave International’s September Global Market Perspective, a monthly publication which covers 40-plus worldwide markets, had that news article in mind as it showed this chart and said: 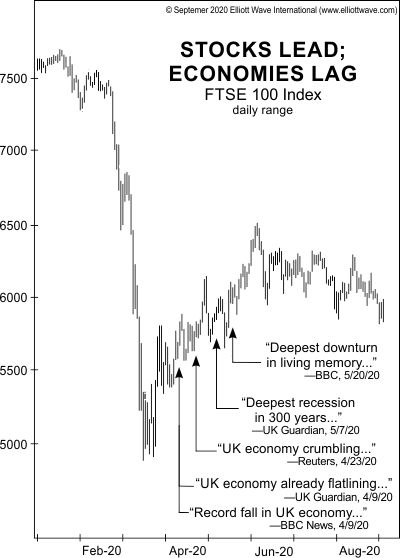 According to the authors, share prices in London are “largely detached from the UK economy. Never has the disconnect between financial trading and economic fundamentals appeared so extreme.” The confusion here stems from the fact that pundits have placed the economy’s cart before the stock market’s horse. … The connection between stocks and the economy remains rock solid, with a steady parade of dire economic headlines following the FTSE 100’s 36% crash from January 17 to March 16.

So, consider any future British economic data a reflection of the stock market’s current performance. In other words, any improvements in the UK economy in the weeks and months ahead will come as a result in people’s growing optimism about the future today — which they have already expressed by putting their money in the stock market.

As for the market’s future performance — that hinges on the Elliott wave model, which you can learn about by reading, Elliott Wave Principle: Key to Market Behavior, by Frost & Prechter.

This quote from the Wall Street classic provides a broad overview: