Peter Krauth discusses the Fed’s inflation target and what that means for gold. 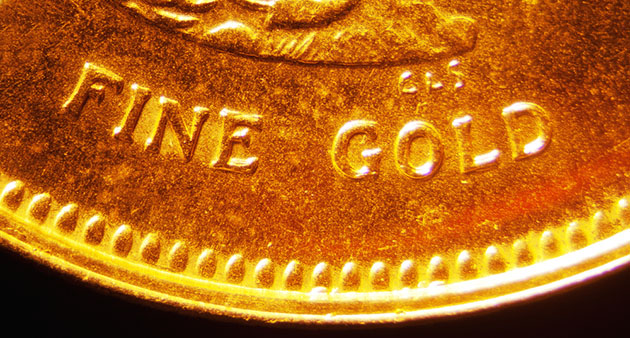 By pulling yet another arrow from its quiver, the Fed’s just helped move us closer that target.


The Fed wants inflation, so it’s going to get it. Problem is, we the people, will have to live with it.

Fed Chair Jerome Powell told us last week they will let inflation run higher than “normal” to make up for stubbornly “below average” inflation for some time.

It’s one more reason investors need to ensure they have exposure to real assets that provide protection from inflation.

Of course there’s raw land and real estate, collectibles and fine art. But these are typically illiquid, out of reach, or fully valued in many places the world over.

Meanwhile, precious metals are arguably much closer to inflation-adjusted all-time lows, as I’ll show you.

And that makes gold a must-own asset for years to come.

Overshooting Inflation, And Then Some

When Jerome Powell recently gave his Jackson Hole speech, he confirmed the trial balloon he’s been floating for some time.

Until now the Fed’s target was 2% inflation. If it went above, they’d cool it off by raising rates. But official rates have been so low for so long, and still that target has remained elusive.

To dial things up a notch, Powell has said the Fed will let inflation run above 2% for some time in order to make up for extended periods below that level. That’s the often mentioned “symmetrical” 2% target.

As a result, rates will stay near zero for some time yet to help achieve those results. With a pound of flesh ripped out of the economy from pandemic shutdowns, unemployment has reached historic highs. So the Fed needs to “do something.”

And we’re well on our wayů

Already this past June alone, the U.S. printed more money than in the first 203 years of its history. Over $10 trillion in stimulus has been approved.

You can bet more is on the way. And that’s just in the U.S.

The dollar was unable to rally despite U.S. Treasuries markedly selling off.

But the biggest takeaway is clearly how gold and silver held up strongly even as bond yields rose.

It’s a massive signal for a weaker dollar over the longer term.

The U.S. Dollar Index broke down below its long-term support back in July. 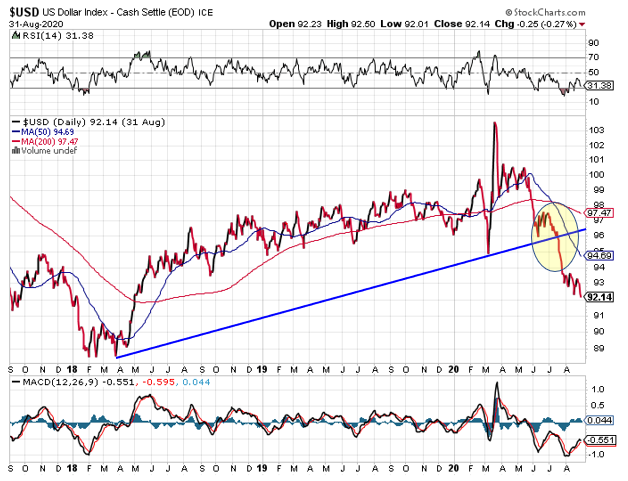 That’s a strong bullish signal that the dollar will continue to weaken over the long term.

However, the very near-term picture is different. 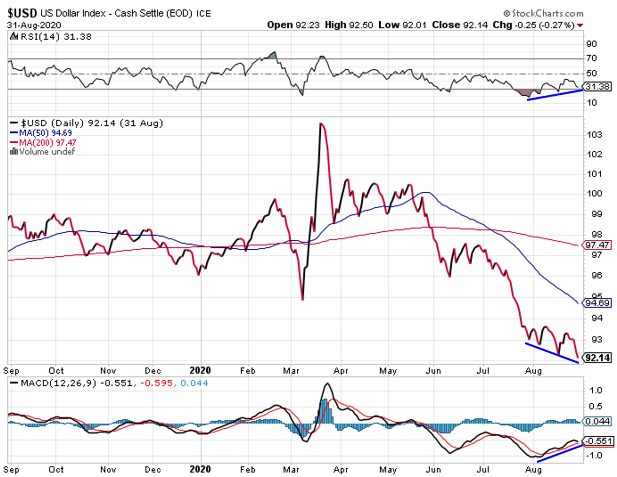 As we can see, despite the downward leg since late July, both the RSI and MACD momentum indicators show positive divergence as they’ve been rising. That suggests a potential relief rally in the dollar over the next few days or weeks.

If that plays out, I’d expect gold and silver to suffer some limited short-term weakness. And that would likely be an excellent opportunity to buy.

We can see that gold has struggled since hitting its all-time nominal high of $2,067 in early August. 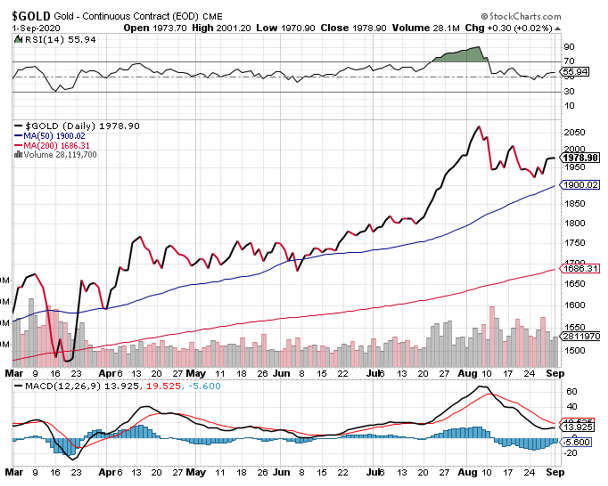 So far, it’s formed a series of lower highs and lower lows, with spot gold ending August slightly down.

For the time being, gold still looks challenged from a technical perspective.

Still, I see much higher gold prices ahead once the current consolidation ends. Here’s why.

This chart shows the Shadowstats.com alternate inflation adjusted gold price. If inflation were calculated the way it was prior to 1980, it would be reported as having averaged about 8% annually since then. 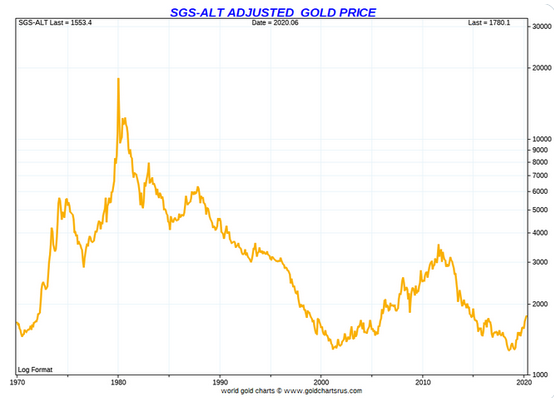 After all, a Fed still willing to keep rates near zero for an extended period, now overshooting inflation to compensate, and tens of trillions in stimulus dollars headed our way should eventually get the job done.

In this context, soaring gold doesn’t sound outlandish at all.