As Helium Prices Skyrocket, Saskatchewan Pure Play Is Rising to the Challenge

The price of helium has gone sky high over the last few years, and Royal Helium Ltd. (RHC:TSX.V), a small-cap helium pure play, is positioned to take advantage.

In a July 29 report on helium, Cormark Securities analyst Michael Mueller noted that “rapidly increasing demand for helium from a variety of high-growth sectors has brought some spectacular price increases for this coveted noble gas. We see the emerging North American helium sector as an exciting opportunity for investors to gain exposure to small-cap companies that are leveraging conventional oil and gas expertise, and in some cases exploiting existing natural gas discoveries, to tap into the tremendous economics offered by helium extraction.” Royal Helium is one of five companies Cormark highlighted in the report.

Helium, an inert gas, is produced by the decay of uranium and thorium, and much of it is produced as a byproduct of conventional natural gas production. Saskatchewan has lots of uranium—the Athabasca Basin in the north is one of the world’s premier uranium deposits—but helium is such a small molecule it escapes from nearly everywhere and ends up in the atmosphere.

“However, an area in southern Saskatchewan has a thick shale cap that traps the helium gas beneath it and prevents it from percolating up through the ground and out into the air and then into outer space. And that helium is available in economic quantities,” Royal Helium CEO Andrew Davidson told Streetwise Reports.


And that area in southern Saskatchewan is where Royal Helium has been acquiring land. The company is the second largest helium landholder in North America and Saskatchewan’s largest home-grown holder of helium permits and leases: it has acquired 205,417 hectares and has applied for an additional 164,068.

Drilling helium is the same as drilling any other natural gas well, Davidson said. “The nice thing about helium drilling in Saskatchewan is its simplicity. There’s no horizontal drilling or fracking; it’s just old fashioned conventional vertical wells. The only difference is that we have to go deeper: 2,500 meters is the depth of hole here.”

Royal Helium has conducted seismic and magnetic surveys, focusing on two areas initially, Climax and Bengough, and has identified seven drill targets at Climax and five at Bengough. Davidson said, “Now we need to actually go in there and poke some holes in the ground and see what comes out.”

Once a well is drilled, a purification system is installed on site. “There are mobile facilities that you can move from site to site, and there are permanent facilities. Those are both options for us, but initially, we are going to use the mobile technology. They come as a series of Sea-Can shipping containers that you plumb into the wellbore and it processes the gas. From there, you truck it to wherever you have sold it, or to further upgrading if required,” Davidson explained.

The gas on Royal Helium’s land also contains nitrogen. “We plan to capture the nitrogen as a byproduct and concentrate it and turn it into fertilizer,” Davidson said. The technology to convert nitrogen into urea for fertilizer exists and Royal believes it can be bolted on to any permanent facility that it eventually builds. This would add a second revenue stream to the company and would serve to increase cash flows from production.

The company is looking to begin drilling shortly and now is in the process of raising capital. “We are out financing and expect to have that done in the next month or so,” Davidson said. “That gives us October to get all of our permits, have everything lined up and start building the drill sites, and then we’d like to be in the ground by November 1.”

Cormark analyst Michael Mueller wrote on July 29 that the sale of Royal Helium’s “raw helium gas is expected to bring in prices of ~US$250/Mcf (~$340/Mcf) while operating expenses are assumed to be ~$30/Mcf based on data from actual helium wells in the area. With wells to cost ~$1.5-2.0 MM per well and assuming rates of ~3 MMcf/d and 1% helium, a single well can be expected to payout in under one year. Also of note, using actual declines from helium wells in Saskatchewan, management expects wells drilled on its lands to have a useful life of ~10 years.”

Royal Helium would be entering the market at a time of exponential increases in the price of helium. Statistics are hard to come by, but the last publicly available price put out by the U.S. Bureau of Land Management noted that from 2017 to 2018, helium increased from $119 per thousand cubic feet (Mcf) to $280/Mcf. “We’ve heard reports lately of $500 to $1,000 per Mcf in the spot market,” Davidson said.

What’s behind helium’s rise? “The primary purpose of helium is a superconductor/industrial coolant. It remains liquid at near absolute zero, the lowest melting point of anything on the planet,” Davidson explained. It’s largest use is in healthcare, as a coolant in MRI machines.

In addition, the inert gas is used in lots of high-tech applications in growth industries, such as in the manufacture of microchips, semiconductors, LCD screens and fiber optics. Helium is also used in space travel and rocketry. 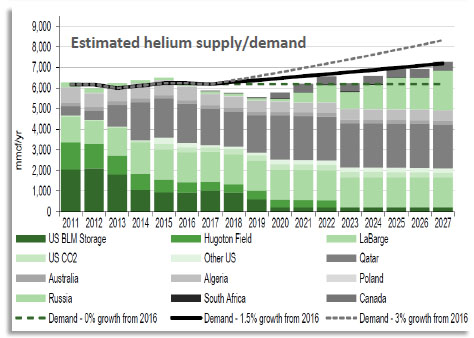 Helium demand is rising at a time when supply has decreased. The U.S. used to be the largest seller of helium in the world through the National Helium Reserve, but with dwindling production of natural gas through conventional wells in the U.S., the helium byproduct supply has decreased, and the U.S. government ceased selling helium in 2018. Much of U.S. natural gas production is now through shale wells, which does not contain associated helium.

“Right now most of helium production is coming from Russia and Qatar, which are still producing natural gas through conventional wells,” Davidson said. “There are projects in Russia and Qatar that are meant to come online in the next couple of years, which will bring helium’s supply and demand closer to balance, but that doesn’t do anything for companies that are looking to secure North American sources for helium.”

Royal Helium has about 56 million shares issued and outstanding, and around 79 million fully diluted. Approximately 35% are closely held by management and insiders.

This report is a Cormark Securities Inc. (“Cormark”) publication that is not to be construed as a research report. Cormark has not initiated formal continuous research coverage of these stocks and maintains no ratings, earnings forecast or target price for these stocks.

Furthermore, Cormark makes no undertaking whatsoever to provide subsequent commentary on these stocks. Forward-looking statements and analysis in this publication are preliminary in nature and are based on publicly available information. The information contained in this publication is drawn from sources believed to be reliable, but the accuracy or completeness of the information is not guaranteed, nor in providing it does Cormark and/or affiliated persons assume any responsibility or liability whatsoever. This publication is not to be construed as an offer to sell or a solicitation of an offer to buy any securities. Cormark may participate in an underwriting of, have a position in the securities mentioned herein and may, as principal or agent, buy and sell such products.