A Look at the Perilous Psychology of Financial Bubbles

The months before the 2000 and 2007 stock market peaks saw a measurable rise in news stories that used the phrase “financial bubble.”

But instead of selling, many investors kept right on buying.

The logic went something like this: “This bubble could burst one day — but not just yet.” 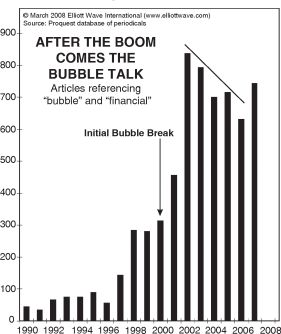 
The bars on the chart show that the number of financial bubble articles boomed as the bear market began in 2000. When the mania re-ignited, the bubble talk receded briefly, only to re-emerge last year [2007] as the housing crash started to bite and the credit market imploded. The … bubble of 2003-2007 should be over, because bubble references are once again rising fast.

‘We’re certainly in a bubble,’ strategist warns — but don’t expect it to pop anytime soon

Is it rational to stay in the market, even after acknowledging something as potentially financially dangerous as a bubble?

Here’s a classic quote from an Elliott Wave Theorist, a monthly publication which offers insights into financial and social trends, and is written by Robert Prechter, the president of Elliott Wave International:

The case for rational bubbles rests on the idea that investors are consciously making risk assessments and deciding that the gamble of buying high — to sell even higher — is worth it. But a bubble is fueled by more buying, which is propelled by new buyers and by increased conviction among those already invested, so few bubble investors actually do sell higher. Instead of buying high and selling higher, most of them do only the first half.

You deserve an independent perspective on financial markets, and Elliott wave analysis can bring you just that.

If you’re unfamiliar with Elliott wave analysis, read this quote from the book, Elliott Wave Principle: Key to Market Behavior, by Frost & Prechter:

Discover more about the Wave Principle by reading the entirety of the online version of this Wall Street classic for free.

Free access to the book is available when you become a member of Club EWI, the world’s largest Elliott wave educational community. Just so you know: There are no obligations whatsoever when you join Club EWI and membership is also free.

Club EWI has around 350,000 members. All members have continual access to a wealth of Elliott wave educational materials on financial markets, trading and investing.

And, now, Club EWI members also have free access to Elliott Wave Principle: Key to Market Behavior — follow the link to have the online version of the book on your computer screen in just moments.

This article was syndicated by Elliott Wave International and was originally published under the headline A Look at the Perilous Psychology of Financial Bubbles. EWI is the world’s largest market forecasting firm. Its staff of full-time analysts led by Chartered Market Technician Robert Prechter provides 24-hour-a-day market analysis to institutional and private investors around the world.

Opinions Stock Market News
← Finding High-Grade Gold Practically in the Shadow of Vancouver
Why do bankers behave so badly? They make too much money to ask questions →
Featured Articles: