It was overdue for a pullback, and boy, are we getting one.

Spot Gold has now fallen into sub-$1900 levels as it extends yesterday’s steep drop. Tuesday’s 5.69 percent decline was Bullion’s largest single-day decline since 2013, with much of the stellar gains seen over the past two weeks now wiped out. At the time of writing, Gold futures are shedding another 2.6 percent.

From a technical perspective, the jarring move was needed to pull Bullion away from ‘overbought’ territory, ending Gold’s three-week period when its 14-day relative strength index was above the 70 mark. 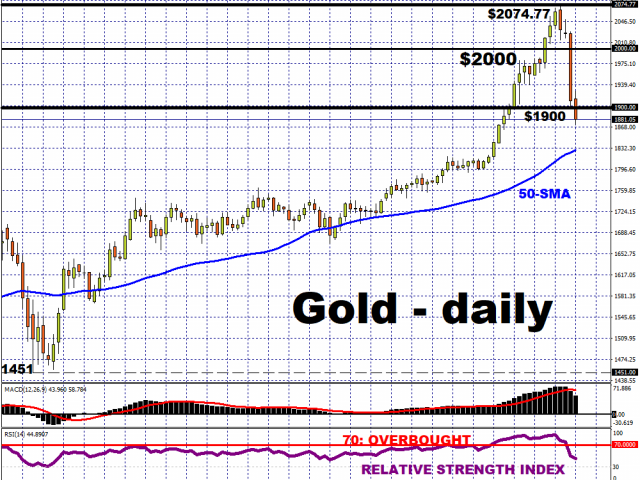 
There appears to be some serious profit-taking going on, as investors rotate funds back into other asset classes, especially considering the swath of US Treasuries that’s being brought to market this week. US real yields pulling back above minus one percent for the first time this month is denting some of Gold’s allure and prompting investors to sell off Bullion.

While we may see a period of consolidation for Gold prices, the overall bullish case appears intact. In other words, there are still plenty of sound reasons to think that Gold prices can resume its climb.

Although 10-year US Treasury yields climbed to 0.64 percent at the time of writing, it remains far off from pre-pandemic levels of above one percent, while real yields are still in negative territory. There also remains lingering concerns over the outlook for the global economy, even as geopolitical risks continue to simmer in the background. While the Dollar index is trying to claw its way back to the 94 handle, investors continue to expect more weakness for the Dollar, and the softer Greenback offers little resistance to Gold’s upside.

Bullion has been guided steadily upwards by its 50-day simple moving average (SMA) since Q2, apart from the brief dip below the line in early June. This trend is expected to remain intact, although it also implies that the pullback may still have some ways to go before spot Gold gets reacquainted with its 50-day SMA once more.