Spot Gold is on a tear! Overnight, it crossed above the $2000 level for the first time in history, although it appears to be taking a slight mid-week breather at the time of writing. 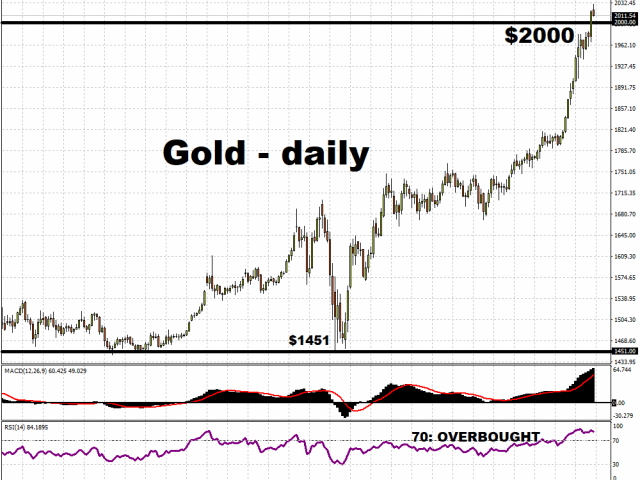 Still, Gold has every reason to climb even higher, considering the flailing US Dollar, expectations for higher inflation, and the unprecedented amounts of financial support from governments and central banks all around the world. The persistent risk aversion in global markets, given the still-uncertain economic outlook and lingering concerns over a potential spike in geopolitical tensions, also creates a longer runway for Bullion bulls.

These supportive factors for the precious metal are widely expected to remain in play for a while longer. It’s much likelier than not that by the end of August, spot Gold will be posting a fifth consecutive monthly gain, which is a feat last accomplished in the first five months of 2017.


Even if Bullion were to stay at this level through the end of 2020, it would still register an annual gain of almost 33 percent, which is the highest annual climb for spot Gold since 1979. That year, over four decades ago, Gold posted a 126.55 percent annual increase to $512 from $226 in the year prior.

In short, Gold’s performance thus far in 2020 has been akin to a soaring rocket, and there seems to be plenty of fuel left in its tank. The precious metal may have another 10 percent or more to the upside before finding its peak.

Dow in need of a lifeline

However, the same cannot be said about US stock markets.

Investors’ patience is being tested as they’re kept waiting over the highly-anticipated US stimulus package. Democrats are insisting on a plan worth US$3.5 trillion, while Republicans have put forward a US$1 trillion proposal. While the political wrangling plays out, jobless Americans are wondering when their next round of aid would arrive, with unemployment payments under the previous support package having run out at the end of July.

US Treasury Secretary Steven Mnuchin has tried to manage market expectations, saying that a deal could be reached by the end of the week. Even then, the legislation could only be passed next week, if everything goes smoothly. A prolonged delay could snuff out the early signs of a recovering US economy. 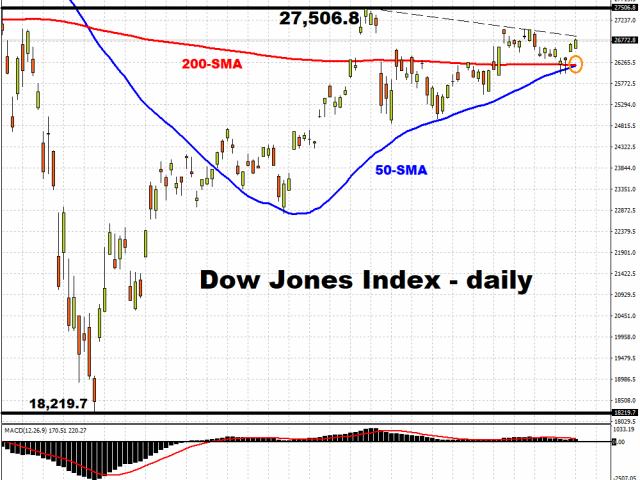 This has left US stock markets in limbo, evidenced by a plateauing Dow Jones index. Despite its overnight gains, the Dow remains over nine percent lower compared to its year-to-date high that was registered on February 12.

With its 50-day simple moving average (SMA) now converging on its 200-day counterpart, the Dow could face a moment of reckoning. It remains to be seen how long the 50-day SMA can continue guiding the Dow upwards, having been a reliable support level since late-April. From a fundamental perspective, US stocks need a clear reason to push meaningfully higher, especially once the ongoing earnings season ends.