Silver: How to Gauge the Crowd’s Mindset

Simply put, a market sentiment extreme is a situation when most everyone has already taken a bullish or bearish position in a financial asset, leaving almost no one left to buy or sell. 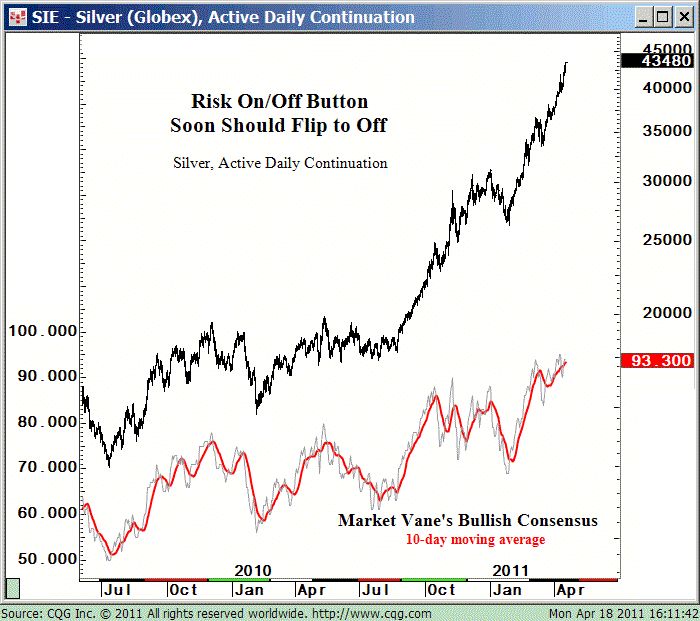 The 10-day average of Market Vane’s Bullish Consensus has now risen to 93.3%, reflecting a broad consensus among advisors that silver will continue even higher. The Daily Sentiment Index of traders pushed to 97% bulls as of Friday’s close. … Extremes are extremes and have to be recognized as such otherwise one gets caught up with the crowd and fails to extricate themselves at a reversal.

Now, sentiment measures are not always precise timing indicators. Markets can stay overbought or oversold for a long time. Still, extremes can be quite valuable when used along with the Elliott wave model, which was also signaling a turn in silver’s price trend in April 2011.

In the past nine years, silver prices have traded well below their 2011 high, but there have been rallies.

On May 11, a well-known precious metals website sported this headline:

They proceeded to outline a bullish case that supported their views of even higher silver prices to come.

They may end up being right, however, the May 20 U.S. Short Term Update showed this chart and said: 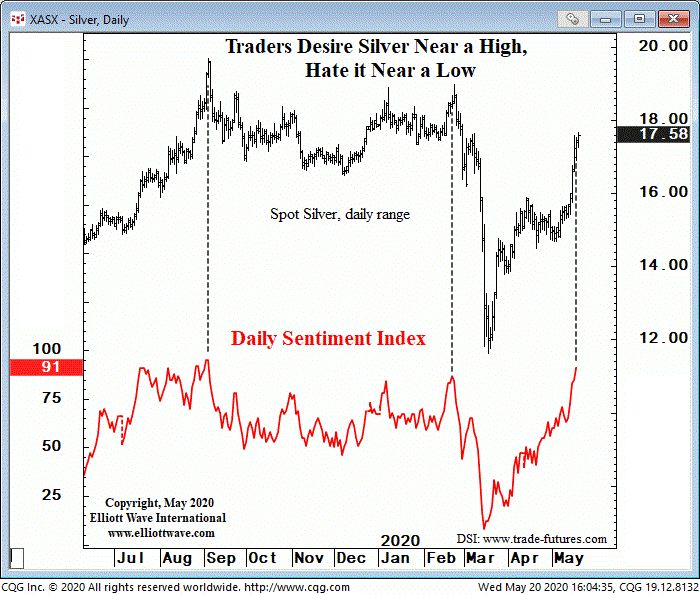 [Silver]’s rally has coincided with a surge in the Daily Sentiment Index to 91%. Traders are more optimistic toward silver’s future prospects than at any time since the peak at $19.69 on September 4, 2019 (95%). The only other comparable reading was on February 21 of this year, when the DSI rose to 87%. The prior sentiment extremes corresponded with price highs. Silver declined 41% from September 2019 to March 18, at which time the DSI dropped to just 8% bulls. The environment has now come full circle. Today’s new intraday extreme was not confirmed by gold.

Just like back in 2011, today silver’s Elliott wave pattern provides even more insight into what to expect next for the precious metal.

If you’d like to learn more about Elliott wave patterns, Elliott Wave International has made the online version of the Wall Street classic book, Elliott Wave Principle: Key to Market Behavior available for free.

All that’s required to access the wealth of information in the book is a free Club EWI signup. Club EWI is the world’s largest Elliott wave educational community. When you join, you get free access to resources, reports and videos which provide you with Elliott wave insights on investing and trading, the economy and social trends that you will not find anywhere else.

This article was syndicated by Elliott Wave International and was originally published under the headline Silver: How to Gauge the Crowd’s Mindset. EWI is the world’s largest market forecasting firm. Its staff of full-time analysts led by Chartered Market Technician Robert Prechter provides 24-hour-a-day market analysis to institutional and private investors around the world.

Metals Opinions
← Coverage Initiated on Company at ‘Forefront of the Telehealth Revolution’
Financial Sector Under Pressure and What It Means →
Featured Articles: