Stocks: What to Make of the Day-Trading Frenzy

Many stock market investors believe that prices have already bottomed. Numerous banks, brokers and financial firms have issued statements saying as much.

Indeed, the May Elliott Wave Theorist, a monthly publication which has offered analysis of financial and social trends since 1979, noted:

On April 28, Bloomberg interviewed four money managers to answer the question of “Where to Invest $1 Million Right Now.” Cash was not mentioned.

All these professional financial observers might be right in their assessment that the bottom is in for stocks.

Then again, the stock market rise since the March 23 low might be a bear-market rally.


If so, it certainly has “done its job,” meaning, as one of our global analysts put it in Elliott Wave International’s May Global Market Perspective (a monthly publication which covers 40+ worldwide markets):

The job of [the first, big bear-market] rally is to recreate the optimism that existed at the previous highs.

One particular sentiment that the rally has “recreated” is known by the acronym FOMO, which stands for the “fear of missing out.”

A little background: Toward the end of 2019, the FOMO sentiment was prevalent. Indeed, our December 2019 Elliott Wave Financial Forecast (a monthly, U.S.-focused publication which covers stocks, bonds, gold, silver, the U.S. dollar, the economy and more) showed this chart and said: 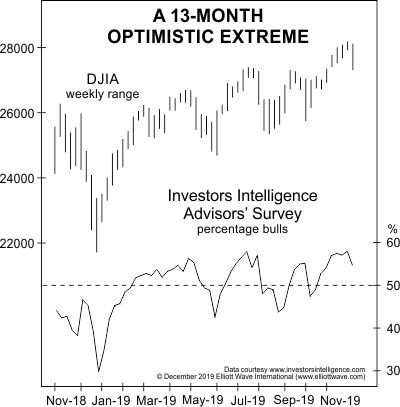 Last week, the percentage of bulls polled in Investors Intelligence Advisors’ Survey rose to 58.1, a new 13-month extreme. … Last month we talked about the return of FOMO, the fear of missing out on stock gains; its last major outbreak occurred as stocks approached their January 2018 highs. In November, FOMO became far more entrenched. One Bloomberg commentator called it “the age-old fear of missing out” and stated, “The end of the year is coming, when investment managers will be judged on their performance. Those who are behind have an incentive to clamber into the market now, while there is still time.” In our experience, “to clamber” is generally not a sound investment strategy.

As you’ll probably recall, day trading became so popular during the late 1990s that some market participants were selling their homes to raise the funds to participate.

Yet, even after the dot.com bust, day trading never went away. There was a marked resurgence in the months leading up to the 2007 stock market top. But, even then, day trading activity was not as intense as it was around the time of the dot.com bubble.

However, the wild speculation that was taking place around the time of the February 2020 top did call to mind the 1990s. 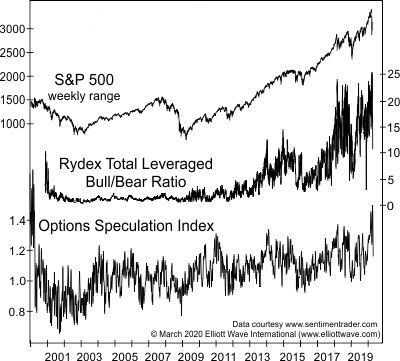 The middle graph in this chart shows that investors’ amazing willingness to bet on stocks with borrowed money lasted right through the top of the bull market. … The bottom graph shows when SentimenTrader.com’s Options Speculation Index jumped to 1.5, its highest total in 20 years. That index divides the total number of bullish transactions (call buying and put selling) by the total number of bearish transactions (put buying and call selling). …

For anyone who wondered about where the small day traders who made the 1990s so wild went, meet the 2020 version.

Did the February / March market meltdown make the day traders go away?

Here’s a May 22 excerpt from Barron’s:

Day trading among individual investors has taken off.

A full-blown retail mania has taken hold in buying and selling small lots of stocks and options. … Many Americans used their coronavirus stimulus checks to trade stocks.

So, no, day traders are as hopeful as ever.

Even a market meltdown that saw the S&P 500 drop nearly 35% in just a month or so was not enough to scare them off.

This speaks to the extreme level of optimism that is now in play and correlates with the stock market’s Elliott wave pattern.

The progression of mass emotions from pessimism to optimism and back again tends to follow a similar path each time around, producing similar circumstances at corresponding points in the wave structure.

All that’s required is a free Club EWI membership.

This article was syndicated by Elliott Wave International and was originally published under the headline Stocks: What to Make of the Day-Trading Frenzy. EWI is the world’s largest market forecasting firm. Its staff of full-time analysts led by Chartered Market Technician Robert Prechter provides 24-hour-a-day market analysis to institutional and private investors around the world.

Here’s Why You Can Forecast Markets Just by Looking at Chart Patterns Jul 15, 2020 - Here are two illustrations of the fractal form of financial markets By Elliott Wave International Nature is full of fractals. Fractals are self-similar forms that show up repeatedly. Consider branching fractals such as blood vessels or trees: a small tree…