Greenbriar Capital has signed an agreement for the design and construction of the Caribbean’s largest solar project.

The project, which according to the company has the highest solar PV contract price in the U.S., took one step closer to realization when Greenbriar announced in early April that it had signed an agreement with the China Machinery Engineering Corporation (CMEC) to design, build, equip and construct the project. CMEC is part of the $40 billion China National Machinery Industry Corporation (Sinomach) group of companies.


This follows last August’s announcement of the signing of a $195 million financing mandate with Voya Investment Management. “The purpose of this Mandate is to structure, arrange, and provide key capital requirements for the Montalva Solar Project,” the company noted.

Puerto Rico’s power generation capabilities were severely battered by hurricanes Maria and Irma in 2017, and a strong earthquake in January 2020 severely damaged the Costa Sur oil-powered electric generation plant, which will not reopen.

The Montalva plant will be built on Puerto Rico’s southwest coast, an area that is generally protected from hurricanes. The area features the island’s highest solar insolation and solar radiation. Montalva, which initially will be an 80 MW AC photovoltaic project, will have the capability to expand up to 165 MW AC. 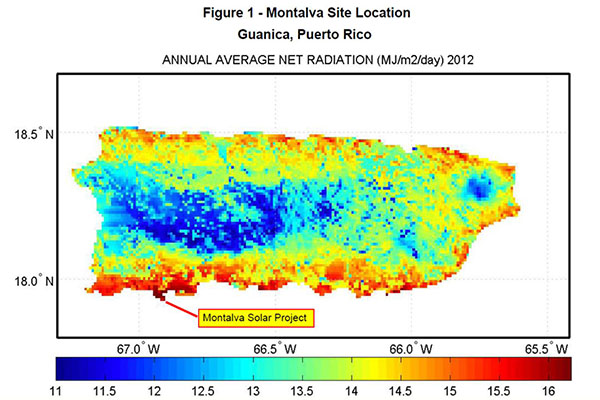 The property also has the advantage that it is home to a Puerto Rico Electric Power Authority (PREPA) power line that connects to the island’s electrical grid.

Greenbriar believes the project will save the people of Puerto Rico up to $2 billion in fuel and operating costs over the 35 years of the power purchase agreement.

A valuation report, ordered by a judge and released publicly in 2018, valued the Montalva project at a net present value of $191 million. Greenbriar estimates that, in 2021, the project will produce annual recurring revenues of $36 million and cash flow of $13 million.

Technical analyst Clive Maund wrote on April 18, “the company itself will pay for all development expenses and has the funds to do so. It’s a winwin situation, because once the project is complete and starts to generate electricity, it will be able to sell it for considerably less to the island government than the cost of other sources of power. The reason that the company should be able to make a lot of money from this project is that (after the initial capital buildup) sunlight is actually free, and there is plenty of it in Puerto Rico.

“The key point to grasp with solar is that the costs of implementation have fallen dramatically in recent years, due to improvements in the technology, making it a serious contributor in the energy field, and this is the reason why Greenbriar can undertake such a mammoth project using just its own funds.”

Greenbriar has around 21 million shares outstanding and 26 million shares fully diluted, with around 24% owned by insiders. The company’s current market cap is CA$25 million.

CliveMaund.com
Clive Maund does not own shares of Greenbriar Capital, and neither he nor his company has a financial relationship with the company.