Dollar bears triggered a knee-jerk reaction in sending the Dollar index (DXY) lower by 0.16 percent to break below 97.1 in the minutes following the latest US non-farm payrolls report. However, that decline counted for naught as DXY was then quickly restored above the 97.2 mark. 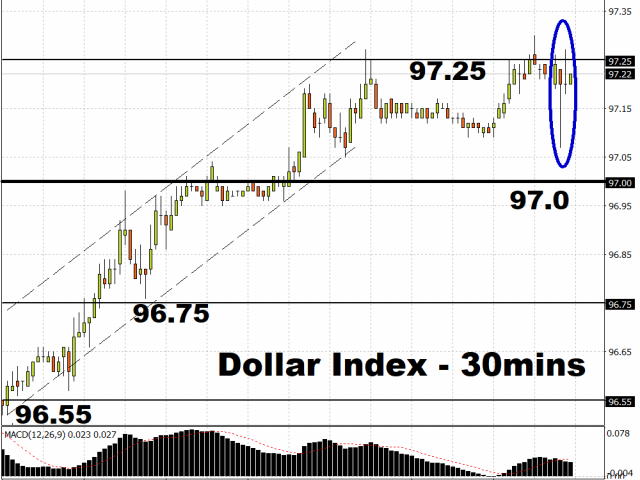 In December, the US economy added 145,000 new jobs, which is lower than the 160,000 figure that markets had expected. Average hourly earnings also underwhelmed at 2.9 percent, which is its slowest growth since July 2018. The unemployment rate however held steady at 3.5 percent, which is the lowest in about five decades.

Although the US jobs market appears to have lost momentum at the tail-end of 2019, the Federal Reserve is unlikely to adjust its benchmark interest rates in 2020, with Fed officials often insisting that the US economy is in a good place. Still, if US consumers begin to show surer signs of faltering and cannot keep the US economy chugging along, then policymakers may have to conduct more policy easing in order to support the world’s largest economy. Should the prospects of a US rate cut grow, then a softer Dollar is expected to follow in tow.

Having meandered along the $1550 line since January 9, Gold climbed some 0.6 percent to pass $1556 in an immediate reaction to the underwhelming December US non-farm payrolls, only to find such gains fleeting as the Dollar quickly rebounded. Bullion bulls are struggling to find cause for a sustained liftoff back to $1600, after the US and Iran appeared to walk away from the brink of an all-out conflict earlier this week. The abruptness of the heightened US-Iran conflict over the past week however shows that investors cannot fully rule out heightened geopolitical risks, and such a sense of caution should keep Bullion relatively elevated above its 50- and 100-day moving averages which currently reside in the high $1400s.

Financial News Forex and Currency News
← Developer of Oncology Therapeutics to Have ‘Catalyst Rich’ 2020
Six Of The Hottest Oil Stocks For 2020 →
Featured Articles: