In this week’s commentary, I am going to respond to the rash of end-of-the-world emails and terror-stricken texts that bombarded me after the BLS reported a better-than-expected Non-Farm Payrolls number Friday that sent stocks screaming higher and the precious metals into a nosedive. I must confess that to the extent that the jobs number can be trusted (hint: it can’t), it nevertheless sent the algobots into apoplectic response mode with the worst-hit of the markets residing with my beloved silver.

The CNBC bobbleheads blamed the spike in the U.S. dollar as the culprit but one glance at the chart below disputes that brilliant “theory” without argument. Silver rallied from $14 in July with the dollar index at 96.00 to over $18 with the dollar index over 99.00, so take the “strong dollar” rationale and bung it into the waste bin.

The reaction to the number was sharp and swift and more of a classic response by money managers betting on a repeat of last year’s debacle all sitting with far too many hedges (like gold and silver) and far too few momo stocks. The 337-point vault in the Dow Jones further highlighted just how alpha-starved these poor chaps are, so over the starboard bow went gold and silver and the VIX and tens of thousands of underwater put options, all the result of bearish capitulation. Nevertheless, my long- term picture for silver remains bullishly intact but certainly not yet prepared to resume the assault on $20 that culminated on September 4 as the Millennial Latecomers did their best to replicate the FOMO mentality so prevalent in the crypto stocks in 2017 and the weed deals in 2018. Silver broke out above the 10-year downtrend line back in July and despite the current corrective phase coming down off the US$19.75/oz. late summer peak, the long-term trend is still positive, albeit nerve-wracking beyond words.

Now, the short-term trend is another matter as it looks to me that we are still locked in that pennant formation I wrote about in very early November. In fact, we came very close to breaking below the 50-dma back then but quickly turned and rallied back to the top of the channel just under $18. If by some ungodly act of Divine Intervention, those two big red candles from Wednesday and Friday turn out to be the retest of the bottom of the channel, then $16.30 followed by the 200-dma at $16.23 are “lines-in-the-sand” of technical support. If they BOTH buckle, then September 4 was THE top and it’s bombs away until $15. My prediction calls for a recovery rally from here this week but no major upside until the new year. 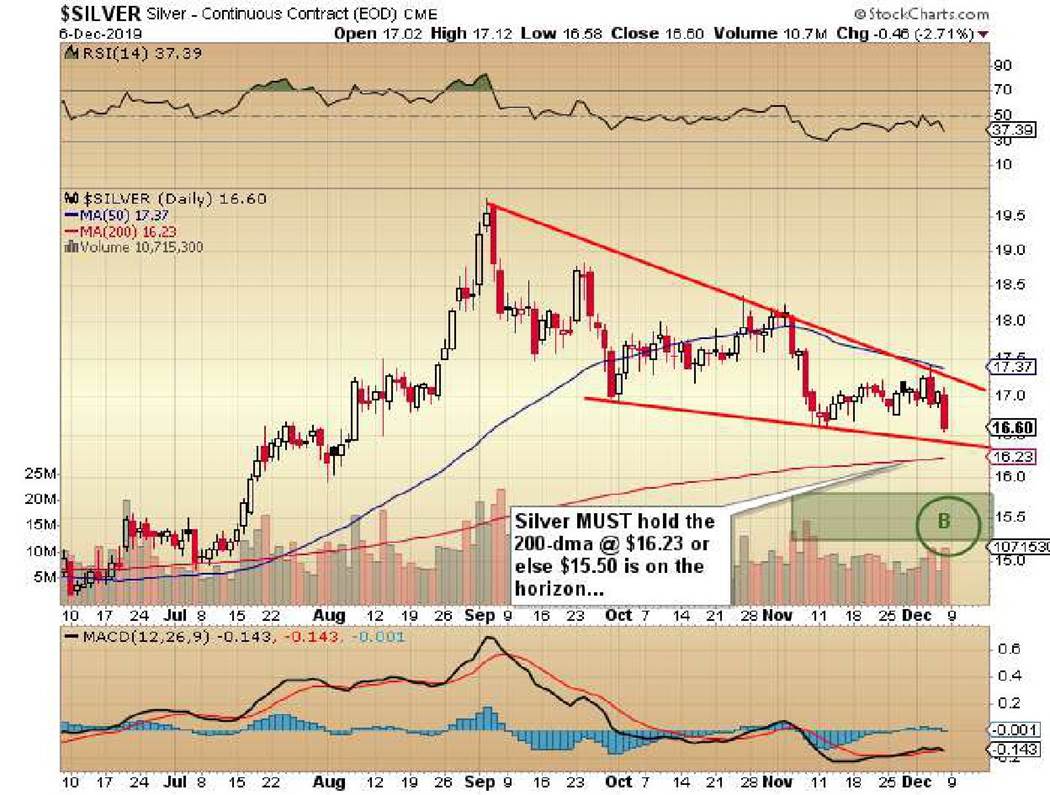 As a matter of housekeeping, I was stopped out of the March futures contracts at $16.70 after the jobs report shenanigans took hold, taking a relatively small $0.35/ounce haircut on the “punt” from last weekend. I am holding on to the SLV Jan $16 calls, which are under water but due to their relatively small exposure to the trading account P&L, I will continue to hold on, relying heavily on Haitian chicken bones and Irish cloverleafs for tailwind support.

In reality, the near-term silver market is fighting through an acute bout of indigestion, having swallowed every morsel of food in its path in that May-to-September moonshot from US$14.56 to US$19.75. Now, the term “indigestion” is a loosely crafted excuse for “interference” and “intervention” because the action leading up to the advance last spring was abnormal, as if a large anvil were placed on its shoulders during each and every trading session. It appears that this “abnormality” has returned, which has pressured the gold-to-silver-ratio (GSR) to over 88 last week and in order to have confidence in the entire precious metals family of futures, options, leveraged and unleveraged ETFs, and senior and junior mining shares, I need the miners outperforming the metals (which they are) and silver outperforming gold (which it is not).

The above chart comparing the relative performances of physical silver to the silver miners is significant. Years ago, I learned that the most impactive signal for confirming the strength or weakness in the gold market was the action in gold mining shares. By example, if a short-term upward probe in spot gold to a new reaction high was confirmed by an accompanying new high in the gold miners’ index, the HUI, then it was to be seen as a “confirmation.” In contrast, a new reaction low in spot gold not accompanied by a similar low in the miners was to be seen as a “non-confirmation,” suggesting that the very near-term trend was coming to an end. Now, a short-term downtrend in the spot price accompanied by an UPTREND in the miners was to be seen as a “screaming, pound-the-table BUY.” Look carefully at the chart posted above; the silver miners ETF (SIL:US) is making year-to-date highs while spot silver probes the lower edge of the pennant. While this might be seen as “aberrative behavior” demanding that I consume copious quantities of muscle relaxants and hallucinogens washed down with bourbon, the probabilities favor a simple and quite BULLISH non-confirmation of recent silver price weakness (and no need for medicinal relief).

The conclusion is that silver remains locked within in the downtrend of the current and very bullish pennant formation. The correct set-up from a trading stance is to continue to buy any and all dips BUT if you are attempting to use leverage by way of options or futures or leveraged ETFs (USLV:US), you absolutely MUST use stop-losses (on futures) and leveraged ETFs while buying only options with a six-month fuse (or longer).

Lastly, because I titled this missive with the descriptive “the Hard Look,” let’s really bear down and look deeply into the mirror and ask, “What would force me to change my outlook from bullish to bearish?” Repeating my earlier comments: If we take out US$16.30 (the lower edge of the pennant) and then the 200-dma at US$16.23, and if price cannot reclaim those levels within seventy-two hours, I would take corrective action and reduce exposure. I would also probably launch my quote monitor OUT of the ninth-floor window in the immediate vicinity of anyone vaguely resembling a bullion bank trader (which would include shaved heads, designer spectacles, bulbous noses and liver spots).

While I remain convinced that a global reset is on the 2020 horizon collateralizing debt by re-pricing gold, we all need to view these markets with appropriate degrees of apprehension, objectivity and mistrust. The most dangerous of all creatures is one that is both trapped and wounded and that perfectly describes this insidious global alliance of politician and banker. As investors we take on the role of “matador” while the bull is the politico-financial cartel. A famous quote by Tara Brach best describes the challenge we face day after day in the 2019 version of “managed markets”:

“When he (the bull) finds his querencia (safe place), he gathers his strength and loses his fear. From the matador’s perspective, at this point the bull is truly dangerous, for he has tapped into his power.”

Herein lies the key to survival in not just silver but all markets: the wounds inflicted by outrageous money-printing and debt creation around the world are verging on near- fatal to the current financial system. Knowing that, they will stop at nothing in order to preserve the corrupt integrity of the status quo. As investors, we have to recognize that rules that held true in prior regimes have minimal impact today so our trading strategies must carry capital preservation as the primary objective. Failure to accept this as the reality of the day will invite an inhospitable outcome.

Michael Ballanger Disclaimer:
This letter makes no guarantee or warranty on the accuracy or completeness of the data provided. Nothing contained herein is intended or shall be deemed to be investment advice, implied or otherwise. This letter represents my views and replicates trades that I am making but nothing more than that. Always consult your registered advisor to assist you with your investments. I accept no liability for any loss arising from the use of the data contained on this letter. Options and junior mining stocks contain a high level of risk that may result in the loss of part or all invested capital and therefore are suitable for experienced and professional investors and traders only. One should be familiar with the risks involved in junior mining and options trading and we recommend consulting a financial adviser if you feel you do not understand the risks involved.

Audio: Trading Strategies for GDXJ, SPY, Bonds, and Natural Gas Jan 22, 2020 - By TheTechnicalTraders.com Chris Vermeulen joins me today to shares his trading strategy for 4 different markets. While most of these markets are not correlated he has reasons for why he is long in each. Pick and choose where you want…