Markets steady ahead of NFP; OPEC agree to deeper cuts

Trump’s upbeat rhetoric on talks with China, which he said were “moving right along,” offered markets a glimmer of hope over both sides reaching the ‘phase one’ agreement. This comes despite repeated mixed signals on the trade front this week. Nevertheless, market sensitivity to trade headlines is set to intensify ahead of December 15 when the United States is expected to impose 15% tariffs on another $160 billion worth of Chinese goods. Given the lack of clarity on US-China trade developments and overall uncertainty, investors are likely to adopt a wait-and-see approach ahead of the US jobs report, scheduled for release on Friday.

OPEC and allies agree on deeper cuts…what next?

Oil prices spiked to levels not seen in over two months above $59.05 on Thursday. This comes after the Organization of Petroleum Exporting Countries (OPEC) and its allies reached a deal in principle to cut output by an extra 500,000 barrels per day in the first quarter of 2020. However, prices later retraced after OPEC+ failed to offer clarity as it lacked key details of the agreement for deeper production cuts. One important takeaway from the proposal is that Russia will be allowed to exclude its condensate volumes from the terms of production, which could see oil prices trade lower. Another complication in the OPEC deal remains compliance, with some nations frequently pumping above their target levels. Until there is a solution to improve compliance, Oil is positioned to depreciate despite the deeper cuts.


Investors will direct their attention towards the press conference on Friday which should offer key details on the agreement and how the production cuts will be distributed among members.

Yesterday saw Saudi Aramco’s initial public offering (IPO) priced at the top of its price range, raising  $25.6 billion and making it the biggest IPO in history, surpassing the $25 billion raised by the Chinese online trading group Alibaba in 2014. The mammoth IPO size gives Aramco a market valuation of $1.7 trillion, taking the crown from Apple ($1.17 trillion) as the world’s most valuable publicly traded company.

The Aramco deal will be significant to Gulf capital markets as the IPO is seen as  the centrepiece of Crown Prince Mohammed bin Salman’s Vision 2030. Given how revenues from the deal will be used to diversify the Saudi economy away from its dependence on Oil, this encouraging prospect should support capital markets in the region. Optimism over the IPO boosting government finances and supporting economic growth in Saudi Arabia should lift sentiment towards the Saudi economy while increasing appetite for Gulf stocks.

Gold has appreciated over 1% since the start of the trading week thanks to mixed signals on the US-China trade front and Dollar weakness. Appetite towards the precious metal is set to remain firm until proper clarity and direction are offered on trade developments – Where the metal closes on Friday will be heavily influenced by the pending US jobs report.

Consensus expects US businesses to have created 185,000 jobs in November. This includes an obvious boost in the manufacturing payrolls of 50,000 after the GM striking workers returned to work and are added back into the data. Should the jobs data meet or exceed expectations, Gold will be one of the first casualties as the Dollar appreciates on fading rate cut bets.

Technical traders will continue watching how prices behave around the pivotal $1480 level. Sustained weakness below here could encourage a move down towards $1460. However, a solid breakout above is seen as opening the doors towards the psychological $1500 level. 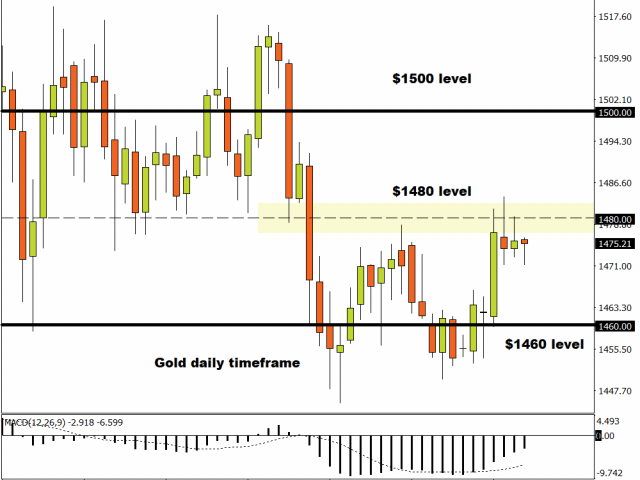 Is Netflix’s crown under threat from rival streaming giants? Jan 20, 2020 - By Lukman Otunuga, Research Analyst, ForexTime - Grab your popcorn and find a seat ahead of Netflix’s fourth-quarter earnings report, due to be released after the US market close on Tuesday, January 21. As the streaming wars kick into higher…

Living Dangerously at Volcano Taal’s Shadow: New Geological and Weather Risks in the Horizon Jan 20, 2020 - By Dan Steinbock - The Philippine Taal eruption may reflect new risks. With accelerating climate change, more frequent eruptions could prove likely over time, while the US exit from the Paris Agreement will accelerate climate risks in the coming years.…