Preparing for the publication of significant statistics

This week, data on industrial production will be published in Germany.Is there a possibility for the DE30 to decline?

The Markit/BME Germany Manufacturing PMI will be released on December 2, the German Factory Orders will come out on December 5 and the German Industrial Production – on December 6. Preliminary forecasts are a bit negative. German retail sales data for October were released on Friday. They showed a 1.9% decrease compared to September, which significantly reduced the growth year over year (from 3.4% in September to 0.8% in October). Since the beginning of 2019, the DAX has grown by 25.4% and is now traded with the P/E ratio of 18. 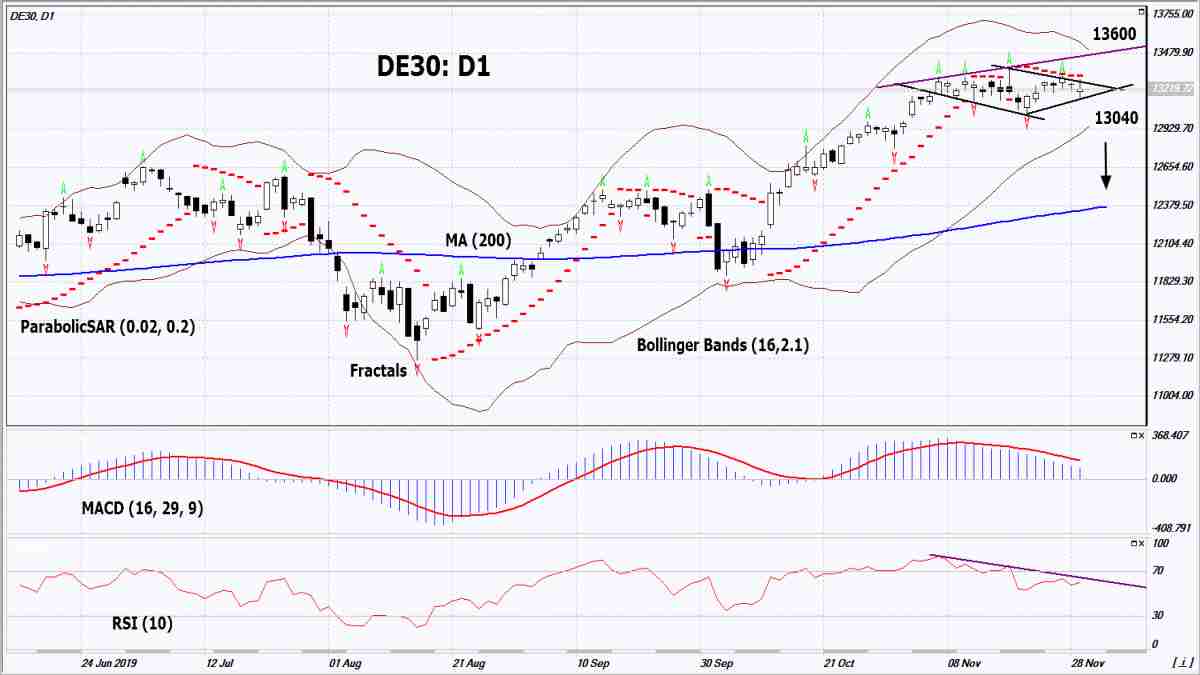 
On the daily timeframe, DE30: D1 formed the figure of technical analysis “diamond”. It continues to be in an uptrend, but its growth has slowed down. A number of technical analysis indicators formed sell signals. It is possible in case of the publication of weak macroeconomic data in Germany.

The bearish momentum may develop in case DE30 falls below the last fractal low at 13040. This level may serve as an entry point. The initial stop loss may be placed above the two last fractal highs, the historic high, the upper Bollinger band and the Parabolic signal at 13600. After opening the pending order, we shall move the stop to the next fractal low following the Bollinger and Parabolic signals. Thus, we are changing the potential profit/loss to the breakeven point. More risk-averse traders may switch to the 4-hour chart after the trade and place there a stop loss moving it in the direction of the trade. If the price meets the stop level (13600) without reaching the order (13040), we recommend closing the position: the market sustains internal changes that were not taken into account.