After 18 months of painful trade disputes between the United States and China, there is finally a glimmer of hope with both sides moving closer to a deal that could resuscitate global growth.

A wave of positivity initially flooded financial markets on news that the US and China agreed to roll back tariffs as part of the Phase I deal. However, this optimism was later tempered by reports that the White House’s plan to rollback China tariffs was facing fierce internal opposition. Although most remain cautiously optimistic  that a trade deal is still on the horizon, conflicting messages between both sides could strain investor confidence and dampen global sentiment.

This is already being reflected in Asian markets on Friday morning with mixed performance as investors attempt to gain clarity on the current trade developments. The cautious mood from Asia has the potential to infiltrate into European markets later this morning.

Buying sentiment towards the British Pound deteriorated on Thursday after the Bank of England’s Monetary Policy Committee surprised investors with two dissenters calling for rate cuts, the first time this has happened since July 2016.

Although it was widely expected that interest rates will be left unchanged in November, the gloomy growth outlook and two dissents fueled expectations over a possible interest rate cut during the first quarter of 2020. Given how the Bank of England downgraded growth forecast for 2020 to 1.2% from 1.3%, and to 1.8% in 2021 from 2.3%, the British Pound could see more pain and punishment down the line. While the prospects of lower interest rates in the UK should also compound to Sterling’s woes, investors are clearly more concerned with the fate of Brexit.

Will the United Kingdom be able to confirm a Brexit deal before the January 2020 deadline or is a no-deal Brexit back on the horizon? As Parliament has been dissolved ahead of the General Election on December 12, more Pound volatility will certainly be on the cards for the rest of 2019 as traders monitor the latest election polls.

Focusing on the technical picture, the GBPUSD looks weak on the weekly charts with prices struggling to keep above the 1.2800 support level. A close below this point should encourage a decline towards 1.2700 in the near term.

It has been a painfully bearish trading week for Gold thanks to renewed optimism over US-China trade talks and improving market mood. Investors have been injected with renewed sense of confidence this week, ultimately reducing appetite for safe haven assets like Gold. The precious metal has shed over 2.8% over the past 5 days and could weaken further if trade hopes fuel the risk-on sentiment.

With regard to the technical picture, Gold is bearish on the daily charts. A breakdown below $1470 should encourage a move towards $1460 and $1450. 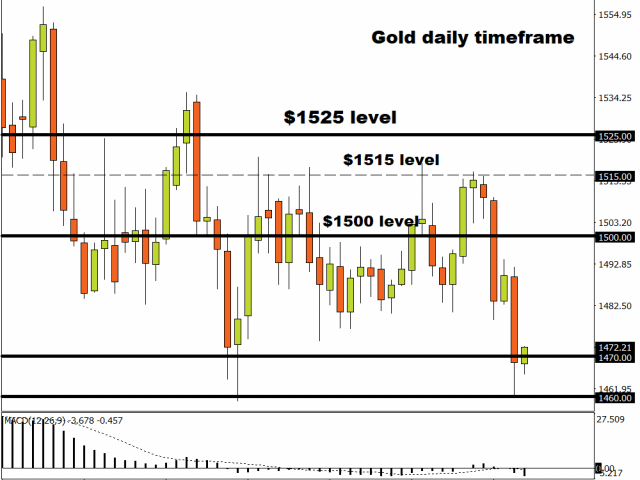